Ramsey-Cass-Koopmens (RCK) model is a neoclassical model which is based on economic growth developed by Frank P. Ramsey with significant extensions by Davis Cass and Tjaning Koopmans. It is an extension of the Solow growth model whereby the new feature is that saving rate is not exogenously given. RCK model is also an alternative to the IS/ LM model for short run analysis. It combines some of the most basic macroeconomic mechanism in one model namely consumptions/ saving, investment and growth. These mechanisms involve decision making. Hence, the RCK model is about intertemporal optimisation.

Diamond model is an overlapping Generation model (OLG) which has developed by American Economist Peter A. Diamond (1965). The model extensions the original contributions of Allais (1945) and Samuelsan (1957) by including physical capital

The two models are similar yet different in some elements.

Firstly, this exercise will focus on the assumptions in RCK model and Diamond model whereby there are some similarities and differences. Both models are in line with basic neo-classical assumptions of perfectly competitive markets whereby the objective of the firms is to maximize profits and individual/ household is to maximize utility. Besides this two main assumption, the RCK and the Daimond have the same assumptions as below:

In the other perspective both models have different assumptions. Diamond model has the following assumptions:

The RCK model has the following assumption:

The next part of this paper will discuss on the dynamic of convergence in both models.

The diagram above illustrates the evolution path of c and k in the RCK model and its dynamic. Points B and D converge to the equilibrium E at the intersection of the lines. Meanwhile the other points are not feasible because the dynamics of this model will generate evolution paths that are not feasible. Point A generates a divergent path, which shows the condition of k must be positive. The path starting from Point B is also divergent and violates that the wealth is not consumed in sufficient way which leading to increasing wealth and reducing consumption. Only Points B and D will generate paths that will converge smoothly to the Modified Golden Rule equilibrium E. However, a pertinent point to note for the RCK model is that the starting point in the economy is critical to ensure convergence. Its dynamics requires that the starting point to exactly on the saddle path denoted by points B and D . Any other points and hence combinations of c and k off the saddle path lead to a divergence.

The dynamic of Diamond Model can be illustrated in in figure 2 and 3. There is a different on the dynamics of the Diamond model compare to the RCK model. This is due to the assumption of an economy overlapping generations instead of an infinitely lived household. The dynamics of Diamond model are determined by the Euler Equation k t +1 = Dk α = f ( k t ) 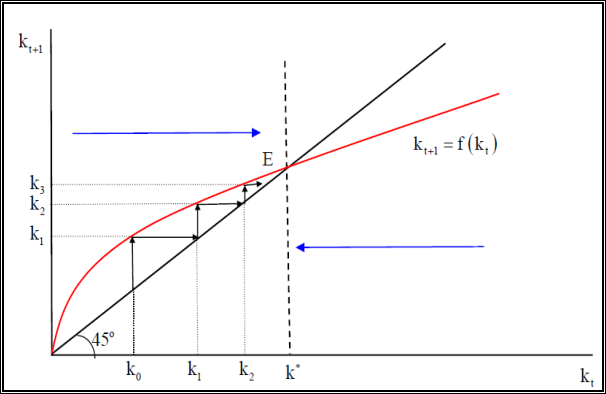 Figure 2 : The Dynamics of Diamond Model

The dynamics of convergence for this model depends on the shape of the kt+1 function. The economy in figure 3 will smoothly converge to equilibrium point E1 at k1 when it starts with the condition kt < k1 or k1 < kt < k*2 . However, it will diverge if it starts with kt > k* There are 2 equilibirium point E1 and E2. However, only E1 is stable while E2 is a knife-edge and unstable. 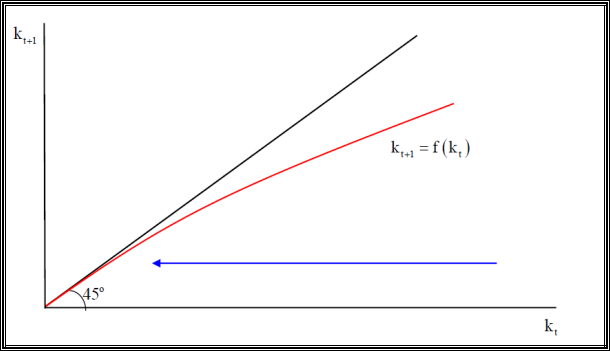 The economy as shown in the diagram above will only converge to the origin 0 regardless of its starting point. The RCK and Diamond models will exhibit similar characteristics upon reaching their equilibrium points. At the equilibrium points, the economy will be on a balanced growth path, where k and output per effective labour will grow at the rate of technical progress g while GDP will grow at the combined labour and knowledge growth rates (n+g). The savings and consumption rates as a proportion of income will also remain constant.

There are two principal ways to levy revenues for a government, namely to tax current generations or to issue government debt in the form of government bonds the interest and principal of which has to be paid later. The question then arise what the macroeconomic consequences of using these different instruments are, and which instrument is to be preferred from a normative point of view. The Ricardian Equivalence Hypothesis claims that it makes no difference, that a switch from one instrument to the other does not change real allocations and prices in the economy. Ricardian equivalence holds under what we earlier called the natural borrowing limit, but not under more stringent ones. The natural borrowing limit is the one that lets households borrow up to the capitalized value of their endowment sequences. These results have counterparts in the overlapping generations model, since that model is equivalent to an infinite horizon model with a no-borrowing constraint. In the overlapping generations model, the no-borrowing constraint translates into a requirement that bequests be nonnegative. Thus, in the overlapping generations model, the domain of the Ricardian proposition is restricted, at least relative to the in_nite horizon model under the natural borrowing limit.

A natural starting point is the RCK model with lump-sum taxation, since this model avaoids all complications involving market imperfections and heterogeneous households. When the government imply taxes, the household’s budget constraint will be the present value of its consumption cannot exceed its initial wealth and the present value of its after tax labor income.In addition with no market imperfections, there is no reason for the interest rate the household faces at each point in time to differ from the one the government faces. The result of the irrelevance of the government’s financing decisions is the famous Ricardian equivalence between debt and taxes. For example if the government give some amount of bonds to each household at a time and planning to retire this debt at a later time, this will require each household to be taxed. This policy has two effects whereby household has acquired an asset which is the bond that has present value and also acquired a liability which is the future tax obligation that also has the present value. Therefore, the bond does not represent the actual ‘net wealth’ to the household and this will not affect their consumption behaviour. Traditional economic models assume that a shift from tax to bond finance will increase the consumption level. The Ricardian and traditional views of consumption have very different implications for many policy issues. For instance, government often cut taxes during recessions to increase consumption spending. But in the perceptive of Ricardian Equivalence, these efforts are failure.

One reason why Ricardian equivalence is not to be exavtly correct is because of turnover in the population. When new people are entering the economy, some of the future tax burden associated with a bond issue is borne by individuals who are not alive when the bond is issued. Therefore, the bonds represents net wealth to those who are currently living and this will affects their behaviour. This possibility is illustrated by the Diamond overlapping-generations model

There is very limited Ricardian equivalence theorem for OLG economies. Any change in the timing of taxes that redistributes among generations is in general not neutral in the Ricardian sense. If we insist on representative agents within one generation and purely sel.sh, two-period lived individuals, then in fact any change in the timing of taxes can.t be neutral unless it is targeted towards a particular generation, i.e. the tax change is such that it decreases taxes for the currently young only and increases them for the old next period. Hence, with su¢ cient generality we can say that Ricardian equivalence does not hold for OLG economies with purely sel.sh individuals. Barro.s (1974) article .Are Government Bonds Net Wealth?. asks exactly offsetting the Ricardian question, namely does an increase in government debt, .financed by future taxes to pay the interest on the debt increase the net wealth of the private sector? Barro identified two main sources for why future taxes are not exactly setting current tax cuts (increasing government deficits): a) finite lives of agents that lead to intergenerational redistribution caused by a change in the timing of taxes b) imperfect private capital markets. Barro.s key result is the following: in OLG-models .niteness of lives does not invalidate Ricardian equivalence as long as current generations are connected to future generations by a chain of operational intergenerational, altruistically motivated transfers. These may be transfers from old to young via bequests or from young to old via social security programs.