This paper will show the economic issues that arise with the distribution of water, water rights, usages and models that help to show issues with scarcity. Economics of the distribution of costs is becoming a large topic within environmental circles. Since water has been deemed a human right it cannot be owned by the public or a utility. Nonetheless, no one person, company, or country truly owns the water, they own the water rights.

Access to water is a human right, free to the world, and ergo cannot be marketed. What this means is that there is not a one size fits all model for economists to determine policy costs and incentives to farmers, people, and cities to properly manage water. Existing incentives are out there for controlling pollution, irrigation practices, and agriculture incentives.

Being the most common and the scarcest commodity on, the Earth. 70% of the Earth is water. Out of that amount, 97% of that is ocean water, only 3% of the that is fresh water. Out of that 3% nearly three-quarters of freshwater cannot be used as it is contained in ice caps and glaciers (Perlman). This means that in the future water may become a driving force for land control and wars. Distribution is irregular and not even, making the market for water fickle.

Water can be found in lakes, rivers, oceans, groundwater and even air. The hydrologic cycle, also known as the water cycle or the way water moves. Water can fall to the earth in the forms of rain and snow, the ground soaks up much of what is not taken in by plants and is then filtered and stored in underground aquifers. This is where most of the water that is used is gained from (Litely, 2018).

There are many areas of study when it comes to water. Many believe that there is not enough water for all the populace, with that being said, there will never be more water than there already is. This means that the amount of water that is on the planet right now will always be the same amount in the future. Distribution is the problem. There are extremely plentiful regions, such as the Great Lakes Regions, and there are regions that it is hard to find water, such as the Sahara Desert (Litely, 2018).

The market for water, like the market for any resource, works by generating or preserving ecosystem services and public and private interests, often in exchange for incentives. The mechanisms that are used, often auctions, are primarily one sided, taking into consideration supply of services or conservation (Uchida, et al., 2018).

Water resource projects must be a one-sided endeavor. What this means is that the policies that are made and determine where the water needs to distributed, should be based on the problem at hand. No one policy or idea will fix the entire water problem in the world. No two areas are the same and the policies in those areas need to be tailor-made to suit the problems in that area (Damania, et al., 2017).

A merit good, such as water, means a person is entitled to it no matter income, being determined as a necessity for life and has been deemed a human right. This becomes an issue when treated. This then makes water a private good as soon as it leaves the faucet. If a hydroelectric plant builds a dam to harvest water, they are renting that water and do not own it. Determination of ownership is the most important thing to understand when making policies (Damania, et al., 2017).

Models suggest that water consumption will increase by 30-50% by 2050. This is due to energy needs, population increases, consumption, and urbanization. Water supplies are limited. Whatever water is on the planet now is all there will ever be here for the end of time (Damania, et al., 2017).

The Lower Jucar basin of Spain has an exceedingly irregular water cycle. This area is often hit with long periods of drought and dry summers. The lower Jucar basin is a primarily agricultural based area consisting of over 102,000 ha that needs irrigated. This uses nearly 980 Mm3 of water per year. Areas that needs irrigation within this area are: Acequia Real del Jucar (ARJ), Escalona–Carcagente (ESC), Ribera Baja (RB), and Canal Jucar– Turia (CJT) This area also includes the Albufera wetland a very important and protected aquatic ecosystem of Southern Europe (Kahil, Connor, & Albiac, 2015). 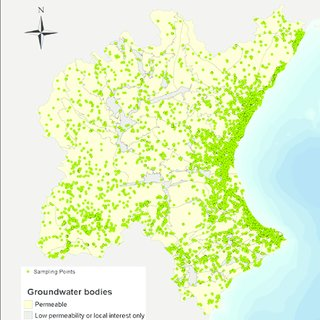 With the increased amount of water needed for irrigation and the decreasing rainfall in the area, there have been numorous negative impacts. These include, water that is available to the ARJ district have been reduced by nearly 40% in recent years, as well as lower irrigation returns to the Albufera wetland(Kahil, Connor, & Albiac, 2015).

This has lead to many researchers and economists to model different scenarios within the area. Climate and adaption scenarios in the area have found that by using grey water and farmers optimizing water applications predictions can be made and results are then presented in terms of irrigation changes, economic impacts, land use, and environmental flows (Kahil, Connor, & Albiac, 2015). 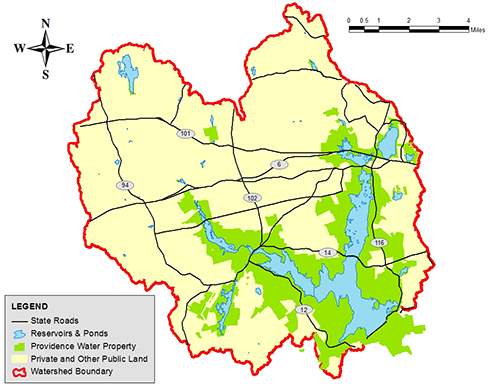 The main goal of the PWSB is to improve the water quality of the watershed. The reservoir maintains a decent water quality, accordingly recent studies have found high levels of nutrients in the water. Studies were done to find whether side-supply auctions or demand side auctions would be the most economical actions (Uchida, et al., 2018).

Water treatment and distribution will never recover all operational costs for water. This means that many income revenues need to exist in order to make a profit in the water sector. When water becomes scarce in a region due to population increases, urbanization, and agriculture the amount of income needed for infrastructure, treatment and distribution increase (Griffin & Mjelde, 2011).

A company sets prices based on a scarcity-inclusive principle. A company will take inventory of the costs associated with water and the processing of it and then will offset those costs by charging a consumer for the use of water, not for the water. This is done by considering the opportunity costs that are taken up by a utility based on the rental rates for water within the service market area and then transforms that cost to the consumer in the rates they are charged (Griffin & Mjelde, 2011).

One method of rent dispersal is that it can be done wastefully, i.e. at the least cost. Production is often organized poorly and remarkably inefficient. When there is competition in an region for a good, services tend to be done efficiently. Consumers will only pay for the best product at the lowest cost to them (Griffin & Mjelde, 2011).

Another method is to give sudsidized access to excess surpluses. When water is treated as an open access market, the gains to be made are lower. In water scarce regions utilities take excess surplus because they allow for extra investments within an are or they are willing to pay for expansion of water treatment areas. This causes entry fees to overshadow entry, in turn existing users are made to pay the same price for lower amounts of surpluses (Griffin & Mjelde, 2011).

Water is right. Hence it cannot be treated as a comodity. There are many out there who do not even have access to water on a daily basis. There is only so much water out there, it cannot be created. This means that with increases in urban areas, agriculture, and populations, water will become exceptionally scarce. Distibution tactics should be user friendly and have an offset cost. Utilities need to find a way to lower the costs of water while still allowing for a clean and useful product.

I got the idea for this by watching an episode of Bill Nye Saves the World. He stated in the show that water may be the next oil in terms of wars and money. Well this struck me as a little odd until I started researching for this paper. I am into going into the wastewater treatment sector and this paper just helped to solidify that idea. There is only so much water out there and the more we use, the less is put back into the world. There is only a finite amount of water out there and there will never be any made. By taking this into consideration, there needs to be more policies directed to the proper use of water and making it accessible to the public. Companies only own the rights to water, not water. This was a new concept to me. I also did not realize that the costs passed on to the consumer were considered to be a rent as well. We are paying for the processing and transportation of the water not the water itself.