In this paper I’m going to present the differences between Beta and Sigma convergences and showing some analysis of real-world data I’m going to represent the concept of convergence in the real-world economies. In my analysis I chose six Asian countries, such as China, Japan, Thailand, India, South Korea and Vietnam, because I already knew about the incredible growth of the Asian economy in the last twenty years and I wanted to compare the economic leaders from the 1996 to the leaders of 2016 and see if their economies have experienced convergence.

Economists have identified different ways to assess whether economies of countries converge, in this paper I want to analyse the structure of Beta and Sigma convergences.

There are two types of Beta convergence, the absolute Beta convergence and the conditional Beta convergence. The first case is identifiable when poor economies tend to grow faster than rich ones. To understand the second, instead, we have to go further the assumption of the neoclassical model and state that in the real-world economies can differ for more than just their initial level of capital. At this point we can notice that as the capital stock of the growing economy increases, its growth rate will decline and will approach zero as the economy gets closer to the its steady states. From this we can deduct that we are in presence of the conditional Beta convergence when the growth rate of the economy is positively related to the distance that separates it from its own steady state. 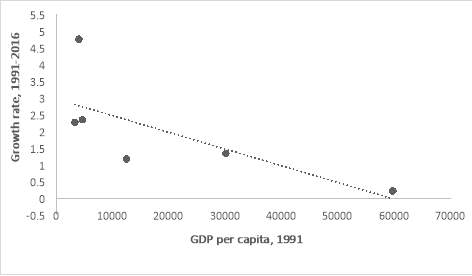 Source: Calculations based on data from: Feenstra, Robert C., Robert Inklaar and Marcel P. Timmer (2015), "The Next Generation of the Penn World Table" American Economic Review, 105(10), 3150-3182, available for download at www.ggdc.net/pwt

In Fig 1, we can notice that the trend line presents a downward slope, and this is caused by the fact that for almost every country of the sample for a high GDP per capita the growth rate of the country is lower confronted with countries with lower level of GDP per capita. In this case we can state that we are in presence of absolute Beta convergence, caused by the fact that poorer countries, such as China and India, are growing faster than rich ones, as Japan and Thailand.

In the case studied the countries present both Beta and Sigma convergence, and it’s easy to notice the aspects of the world the two kind of convergence analyse. We can observe that the Sigma convergence it’ strictly related to the fact that the cross-country distribution of world income shrinks over time. As far as concerned the absolute Beta convergence we can approach it to the movements of single economies within the distribution of world income and we can easily compare the speed of growth in different countries and notice particular cases of convergences and divergences. In particular in looking at Fig 1 we can see that there’s a big difference between the level of growth of the poorer countries and the rich ones, and this can help us to understand why the dispersion between the countries is dropped so fast and that there’s a dependency of Sigma convergence on the presence of Beta convergence, this is given by the fact that it’s impossible for the poorer economies to get closer without growing faster than the rich ones. This case is a proof that the existence of  Beta convergence will tend to generate Sigma convergence.