Priming is an effect on implicit memory in which the reaction time of a response to a stimulus is faster due to having previous experience of the stimulus. For example, individuals can recognise a word faster if it is paired with a related word. For example, “table” and “chair” and are slower at recognising words if they are unrelated. For example, “nurse” and “butter” (Refer to appendix A). In the study of Meyer and Schvaneveldt (1971) we refer to semantic priming, where semantic refers to the logic and language individuals store in their implicit memory. Meyer and Schvaneveldt (1971) suggested that the response times were faster when the string of words were related because a part of the memory is activated in which the retrieval of words from semantic memory is faster.

Associative priming and the lexical decision task is an extension of the study by Meyer and Schvaneveldt (1971). In their experiment they hypothesized that recognition of a word is faster when it is associated with its prime. In their experiment they presented 12 participants with two strings of letters, one above the other. Their task was to press the ‘yes’ key if the two strings were words and the ‘no’ key if one or both were non-words. In their results, they found that response times were faster when the target string consisted of related words such as ‘bread’ and ‘butter’ or ‘nurse’ and ‘doctor’ proving their hypothesis to be correct. Furthermore, another psychologist McNamara (1992) demonstrated results from a similar experiment of associative priming. He also found that mean response times were faster when words were related rather than unrelated. He also found that errors rates (percentage of errors) were much higher in the non-related condition than in the related condition. The present experiment is in favour of that of Meyer and Schvaneveldt’s (1971) and McNamara’s (1992) because similar results were obtained from both research studies. The difference to the present study to that of Meyer and Schvaneveldt’s (1971) was that the string of words were not presented simultaneously, they were presented one after the other and the participants were to decide if both strings were words or if one of both were non-words. From this it is unknown which letter string is the one that the participant responds to from their implicit memory. However the present experiment could allow us to investigate the effects of the time between the letters are presented on the effects on response times. Another modification that was made was that in the present experiment, was that one letter was changed in either a related or an unrelated word. This allows us to investigate the effects of the response time on the identification of words. Previous research by Meyer and Schvaneveldt (1971) and findings from the present experiment are relevant in explaining how the long term memory is organised in individuals.

As the experiment was computer based, each participant had access to a computer. The program was written in TCL for Windows, and ran on PCs using the Windows 7 operating system. There were two types of stimuli used in the experiment; words and non-words, related and unrelated words. Key findings in the experiment showed that participants responded faster when words were related to each other; for example, ‘bread’ and ‘butter.’ Thus, participants responded slower when words were unrelated to each other; for example, ‘table’ and ‘nurse.’ 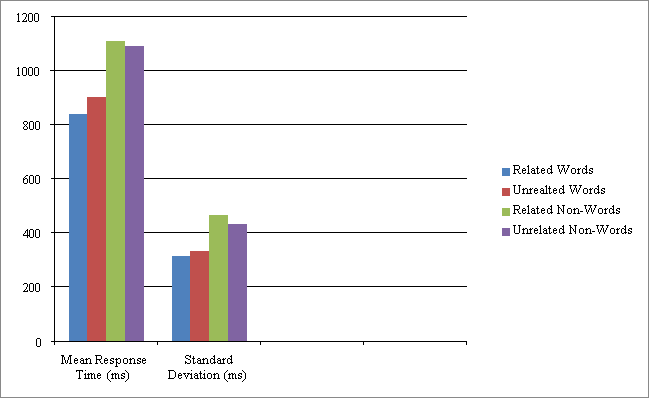 An opportunity sample was used in the experiment and may be considered as a weak research method by many researchers. Therefore this kind of sample may produce a biased sample as it is easy for the researcher to gather participants from their social group; in this case, a sample of students from the same educational institution. Hence the results of the experiment are not generalizable to a whole population. Since majority of the participants involved in the experiment consisted of students, the results can be affected because a much educated, mature individual will have more knowledge of the world and whose memory may be better than that of students. Similarly, a younger, uneducated individual may not have a reasonable good memory so their results will differ from the student’s results. A more appropriate type of sample may be a volunteer sample, where the experiment will recruit all types of individuals from the society. This way the findings of the experiment may be generalizable to a total population.

Stimuli used in the experiment. The words in the brackets indicate where the pseudo word originated from.

Number of trials per condition.

A diagram of how knowledge in semantic memory may be organised. 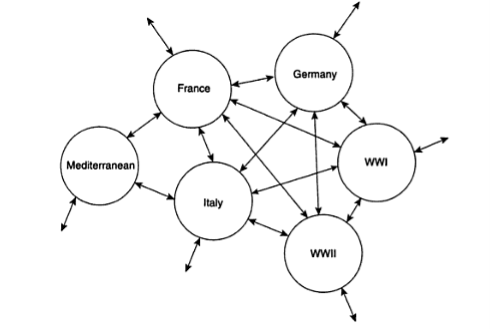