Neuropsychology, the Newest Tool in Psychology

2) Neuropsychology as a new field

2.2) the role that Neuropsychology plays

3) The history of Neuropsychology

4) The difference between fields related to Neuropsychology

6) Relevance of Neuropsychology for Counsellors

The author’s brain, and his thought processes

It is with the above mantra in mind, this text will explore Neuropsychology. Neuropsychology is one of the newest disciplines inside psychology, and therefore subject to wariness if not revulsion by those involved in psychology, due almost solely on its newness. Registered Counsellors in South Africa face an interesting dilemma – in an effort to be as effective as possible Neuropsychology must be utilized, however, its newness creates a problem. Re-educating counsellors costs time and money in a nation that cannot afford it, but not doing so leads to an almost unethical practice of wilfully excluding the usage of a tool that aids in one’s work.

A representation of the author’s brain and mental processes will also be included.

2) Neuropsychology as a new field

Neuropsychology is a new field –even when compared to Psychology itself, a science that has only formally existed for little compared to other medical sciences- and so is associated with much confusion. An excellent and concise definition is that Neuropsychology is, “the scientific investigation of cognition, that is, of all mental abilities: perception, attention, learning, memory, processing of spoken and written language, thinking, reasoning and belief formation” (Coltheart, 2002:139). There are several terms in Neuropsychology that must be known.

As with most fields of science, there are numerous technical concepts and terms. The following terms are important if one wishes to become familiar at Neuropsychology, but pale in comparison to the more technical terms that a Neuropsychologists

Cognitive Neuropsychology is focused on hew the specifics of the brains form and functions translates into mental (psychological) processes.

2.2) the role that Neuropsychology plays

3) The history of Neuropsychology

Although the relation between the mind and a ‘thinking-organ’ (once thought of the heart, but many times as the brain) and behaviour, cognition, and emotion have been known and explored for millennia, from philosophers, holy men, and apothecaries, to physicians and healers (Stanley, 2000) it is only since the middle of the nineteenth-century that Neuropsychology has been scientifically defined (Hallett, n.d.).

The now famous Broca, Wernicke, and Dax were the first to observe an empirical link between damage to specific areas of the brain and the disruption of speech (as well as comprehension of speech (Hallett, n.d.,; Banich & Compton, 2011). Once empirical science was first used it has become both the de jure and the de facto means in which theory and practice regarding Neuropsychology have been linked. No longer did theory disregard observation.

Due to the limitation of equipment, there was little progress in Neuropsychology until the development of brain-imaging technology, as only autopsies could conclusively be used to observe most types of brain damage. This technological disadvantage acted in conjunction with the rise of the behavioural perspective of Psychology to place Neuropsychology out of favour (Coltheart,2008) .

Once magnetic resonance imaging (MRI) was invented – followed quickly by functional magnetic resonance imaging (fMRI)- was developed, the cognitive sciences advanced again, thus allowing the activity of the brain to be viewed while the observed was conscious and thinking, or moving. This allowed real-time comparison between the brain, thoughts and actions (All Psychology Careers, n.d. 2)

4) The difference between fields related to Neuropsychology

There is a large amount of overlap with Neuropsychology and the medical (more physically minded) cognitive sciences. These differences must be known so as to avoid confusion.

Cognitive Science, is different from Neuropsychology

South Africa’s status as a developing nation translates into a lack of funding for social services, as well as a lack of disposable income to pay for services. Therefore, the number of specialists such as Neuropsychologists is low, but the number of Registered Counsellors is higher, but still low compared to the ideal – an ideal where there was never a lack of mental health experts for those in need.

6) Relevance of Neuropsychology for Counsellors

In the South African context, registered counsellors act within the role of gatekeepers to psychological support. In short, if a counsellor cannot support a client due to the client presenting issues and problems outside of the limited remit of counselling, the counsellor will then decide who to refer their clients to so that experts in specific psychological fields.

Therefore, it is of paramount importance that counsellors be educated with enough of these more specialist fields so that a full decision on referral is made with the fullest amount of knowledge to back it.

As counsellors act as ‘gatekeepers’, specialists are kept protected from overwork. This is due to the fact that a lower bar of entry (not necessarily a negative thing) for counsellors translates to there being a larger number than more specialist psychological health professionals – who are fewer in number, and able to treat few people.

Neuropsychology is an interesting and powerful new part that resides in Psychology as a whole, but is related to Cognitive Neuroscience, Cognitive Science in a way that bridges the physical and the mental. It is the bridge that connects two, once separate, worlds.

The author’s brain, and his thought processes 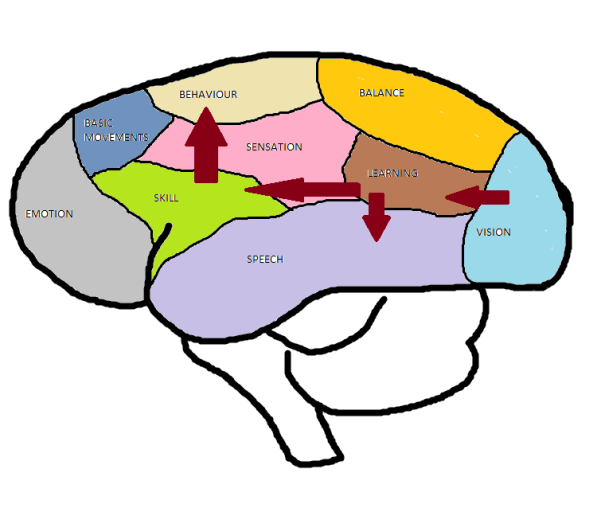 All Psychology Careers. (n.d. 1). What is Experimental Neuropsychology?. Retrieved 6 April, 2015 from http://www.allpsychologycareers.com/topics/experimental-neuropsychology.html

Stanley, F. (2000). Minds behind the Brain: A history of the pioneers and their discoveries. London: Oxford University Press.