Many students engage in procrastination and procrastination behaviours are found to have negative impacts these students. The study uses behavioural modification focusing on changing environmental factors for each individual to be able to measure the amount of procrastination or study and hence change this behaviour. The sample studied consisted of 302 second year university students at the University of Sydney. The findings agrees more with previous behaviourist theories and less so with the cognitive behaviour therapy theories that suggest perception is the main reason for this behaviour change. The study was successful in measuring the amount of time students spent procrastinating and studying and this measurement will be useful in future studies on this topic.

Whether it is leaving next week’s assignment to the day before the due date or leaving the dishes in the sink until there are no clean plates left to use, everyone has procrastinated at some point in their lives. The group that tends to procrastinate the most, however, are students where 95% of whom report engaging in the behaviour (Ellis, Knaus, 1977) which is problematic in aspects of health and academic achievement (Cao, 2012; Tuckman 1990) therefore to further study this behaviour, we must first measure it. Currently, there are two main approaches to studying behaviour, from the behavioural point of view and the cognitive point of view. Cognitive behaviour therapists such as Mahoney (1974) propose that people do not respond to the stimulus in the environment but their perception of the environment, especially for compulsive behaviours. Meanwhile behaviourists such as Skinner (1963) propose that behavioural modification is a result of effectively controlling the environment (Brigham, 1980) Utilizing the principles of operant conditioning and reinforcement theory, the study aims to investigate the effect of antecedents and consequences as environmental factors on two overt behaviours, studying and procrastinating, assuming these factors determine and influence the probability, strength and frequency of the behaviour in university students. For purposes of this study, procrastination may be defined as choosing the task with immediate reinforcement rather than the long term task of studying where there is no immediate reinforcement due to impulse and not having enough self-regulation (Steel, 2010; Tuckman, 1990). Managing the antecedents such as the immediate surroundings and people in the surroundings are important as they trigger certain types of behaviour (Martin, 2007), therefore we hypothesize that limiting access to antecedents of studying will decrease the amount of time spent studying and that limiting access to antecedents that cause procrastination will decrease the time spent procrastinating. We also hypothesize that, managing the consequences by limiting access to reinforcers that strengthen procrastination will decrease the probability of the behaviour happening again, and vice versa with studying (Skinner, 1963). This was tested by measuring the amount of time spent studying as well as procrastinating before and after implementing a behaviour modification plan where students decide to either increase the amount of time studying or decrease time spent procrastinating by limiting their access to antecedents, giving out reinforcement for meeting goals and negative punishments for unwanted behaviour.

A total of 556 second year psychology students enrolled in the Brain and Behaviour course were recruited for the study. 444 students out of the 556 began the exercise and the final data was selected from the 302 students who completed the study and fulfilled the requirements of having exactly five days of recorded data. The study took place over four weeks and during the first week, all students were given a chart (appendix A.) and asked to record the amount of time in minutes that they spent studying and procrastinating each of the five days from Monday to Friday, and record the antecedents and consequences to both types of behaviour. The following week was spent creating a personalized behaviour modification plan. Each student used the same table to record their data and created a personalized behaviour modification plan manipulating antecedents and consequences to either increase the time spent studying or decrease the time spent procrastinating. A behavioural goal was set and antecedents were controlled by limiting or increasing the access to certain antecedents which cause either studying or procrastination. Reinforcement for reaching the goal was given according to each students plan as well as negative punishment for not reaching the goal. Time spent on lectures, classes in addition to time spent doing everyday tasks such as sleeping and eating were not considered as either study or procrastination. The following week, students were separated into two groups: the treatment group who implemented their plan and the wait-list control group who did not. In the fourth week, the groups exchanged places but the data was not used. All students were asked to record the total time spent studying each day for the four weeks through an online anonymous system at the end of the study. 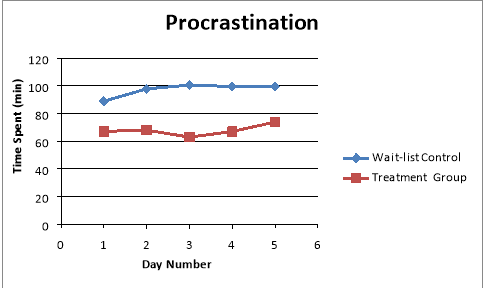 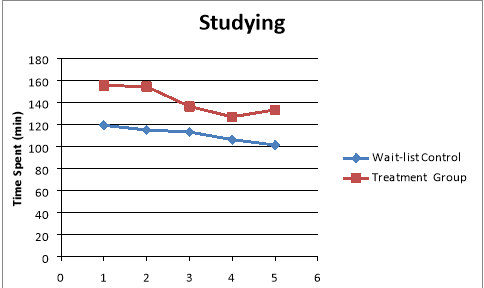 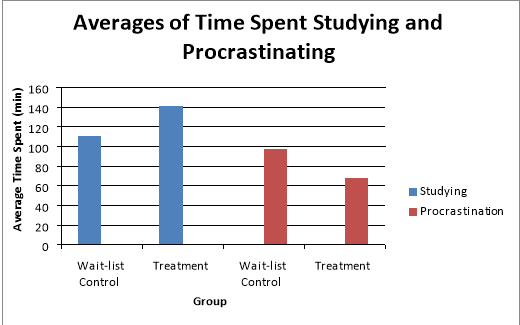 Figure 3. Graph of the average time spent studying and procrastinating in total for wait-list control and treatment groups.

The results show that the average difference between time spent procrastinating and studying for the treatment group was an average of 73.41 (Figure 3.), hence students were successful in either increasing the amount of time studying or decreasing the amount of time procrastinating. As predicted, even though each student’s antecedents and punishments were unique and though the contiguity of the reinforcement varied, the significant difference of the average time studying and procrastinating between control and treatment groups confirms that environmental factors influence behaviour and that adjusting the environment can allow us to target certain behaviours (Figures 1 &2). The results also indicate that there was an average difference between studying and procrastinating of 13.70 for the control group, approximately 18.6% of what it was for the treatment group. This may be explained as an effect of self-instructing (Cohen, DeJames, Nocera & Ramberger, 1980), where students in the control group, especially those who have better self-efficacy (Cao, 2012; Tuckman, 1990), realize how much they procrastinated after the first week of recording their data responded to a hypothetical environment and perceived consequences of what would happen if they did not change their study habits (Mahoney, 1974), thus influencing the targeted behaviour. Although there has been debate of whether it’s the individual’s perception of the environment that changes behaviour or that sensations and perception can be the antecedents, students in this study were asked to only manipulate the environment, proving that it is possible to change certain behaviours in this way. The study measures the amount of procrastination versus studying however; it does not target procrastination as students were given a choice of increasing studying or decreasing procrastination. Monitoring which of the environmental factors students chose to manipulate and how they managed them would assist in targeting procrastination or study. Monitoring more factors that may influence the results of the study is also important in considering the individuals response to the task (Skinner, 1963) such as comparing the data of individuals from the first week and the week that they implemented their modification plan.

The entire study consisted of four weeks however the data used was only taken from five days of the third week and does not measure any long term results on target behaviours to fully determine the effectiveness. To measure the extent of relapse and the long term effect of the behaviour modification plan, the study could be extended to more than one week, include weekends, and a follow up study could be done after the initial experiment (Martin, 2007). Another aspect to consider in the future may be reciprocity as the study has determined that environmental factors affect target behaviours but perhaps the individuals behaviour also influences the environment, for example, if the student tends to procrastinate more maybe there will be more antecedents that trigger procrastination, therefore managing those antecedents will have a larger effect on decreasing procrastination (Brigham, 1980). Steele (2010) mentions that there are different stages of procrastination which would indicate different behavioural modification plans. Perhaps in the future, studies could measure the effect of controlling environmental factors for both predecisional and postdecisional procrastination for people who do and do not intend to procrastinate. It should be mentioned that although students were given instructions on how to choose which environmental factors to control, the data used in this study was self-reported and it may be beneficial in future studies to verify that the treatment group is decreasing procrastination or increasing studying. A way to do this are perhaps to involve achievements through a learning task and correlate the amount of learning in the treatment and control groups because this way decreases the possibility of reporting false information as well as the possibility of the subject receiving the reinforcement before reaching their goal (Martin, 2007). The present study used reinforcement theory of operant conditioning to either change the amount of time students studied or the time they spent procrastinating. Behavioural modification by managing the environmental factors of antecedents and consequences may be used to measure certain targeted behaviours reliably. Manipulating the environment allows students to measure and target unwanted behaviours such as procrastination, and minimizes negative effects on their lifestyles and academic careers or alternatively, increase sought after behaviour such as studying.

Ellis, A., & Knaus, W. J. (1977). Overcoming procrastination: Or how to think and act rationally in spite of life’s inevitable hassles. Institute for Rational Living.