The purpose of this study was to test the retention of long term memory based on retrieval environments. Our research is based on Godden and Baddeley’s (1976) study that focused on the relationship between retrieval environments and learning. The technique known as context-dependency –which is defined as “the belief that what is learnt in a given environment is best recalled in that environment” –is tested and compared to previous research (Godden & Baddeley, 1975). An experiment was conducted at Foundation Campus at the University of Central Lancashire with nine international student. Enlisting a repeated measures design and laboratory method, the participants are asked to learn and recall a list of 13 words in the same environment, then they were asked to learn and recall another list of 13 words in two different locations. The results corroborate and support the context-dependency memory effect.

This experiments is about assessing the effect of retrieval environments when it comes to long term memory (LTM) recall. LTM is described as stored information that can be recalled over a long period of time –e.g. days, weeks, etc. (Merriam-Webster, (2015). Godden and Baddeley (1995) decided to conduct an experiment to test this notion –also known as context-dependency memory effect. Context-dependency memory effect is defined as “the belief that what is learnt in a given environment is best recalled in that environment” (Godden & Baddeley, 1975).

When asked to recall, Godden and Baddeley found that “those who learned and recalled in the same location remembered the most words -12.5 on average” (Cardwell, Clark, and Meldrum, 2008:11).

According to the aforementioned graph, Godden and Baddeley found that when participant learned on land an recalled the information under water, they could only recall -on average -8.6 words, while those who learned under water and recalled the words land, only remembered 8.4 words on average (Godden & Baddeley, 1975).

This study –based on Godden and Baddeley’s research in 1975 – will examine and delve into the connection between learning and retrieval environments. This study will utilize students with diversified ethnic backgrounds and ages. Contrary to Godden and Baddeley’s research, it will use two lists of thirteen simple words -–all within one to three syllables –in order to ensure comprehension.

Aim: To examine the connection between learning and retrieval environments using Godden and Baddeley’s study on context-dependency retrieval.

A repeated measures design was employed in order to negate/remove differences that numerous samples would possess. Due to this design, differences in gender, linguistic ability, comprehension and age were avoided.

In agreement with research principles/ethics, written informed consent forms were distributed to all participants before this experiment commenced. Participants were given the right to withdraw at any time, and immense confidentiality with participant’s information and results was promised and delivered.

Initially, the aforementioned materials were given to the participants. Secondly, in order to check for errors in our experiment, a pilot study was conducted to ensure validity in the experiment. After the pilot study, a classroom and canteen was procured for the experiment. A mixed-gender opportunity sample of nine individuals –ranging from 18 to 25 –was obtained and directed into the classroom. During this experiment, the participants were first given an informed consent form (Appendix 1), after signing and agreeing to the form, they were shown the standardised instructions (Appendix 2). After the standardised instructions, the participants were given a piece of paper –with “experiment 1” written on one side, and “experiment 2” written on the other side, -they were also given pens to document their answers. 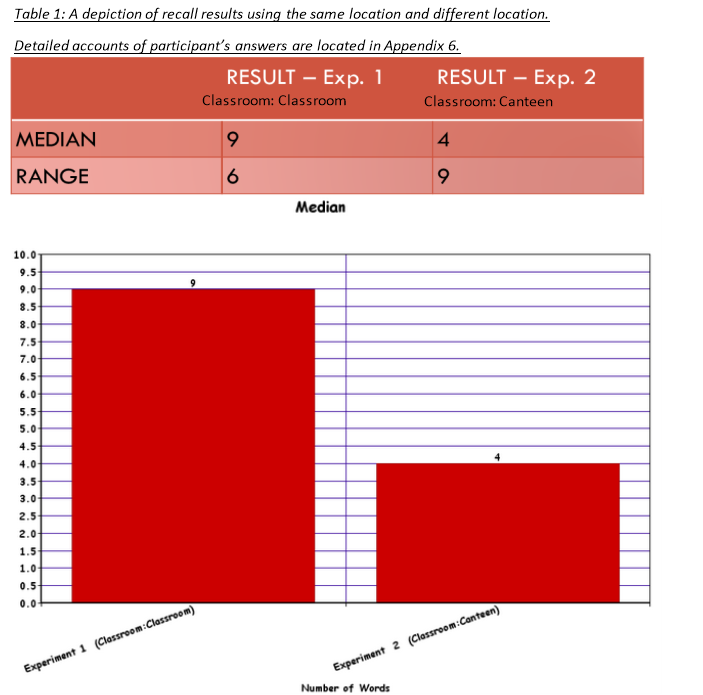 The result of this experiment were harmonious to that of Godden and Baddeley’s in 1975. 66.67% of the participants recalled more words when their retrieval location was the same as the learning environment, while 11.11% percent of participants recalled more information when the recollection environment was not the same as the learning environment. Furthermore, 33.33% of the population recalled the same amount of words irrespective of the retrieval environment. These results were in accordance with the hypothesis and Godden and Baddeley’s research in 1975. The mean of the results was greatly corrupted by outliers with the sample’s results, in order to rectify this, the median was enlisted to portray a balanced assessment of the results. The median of recollection when the learning and recollection environments were the same is 9 words with a range of 6. When the learning and recollection were different, the median of the recollection data was 4, with a range of 9. Overall, it was quite evident that recollection in the same environment where information is learned yields better results. The results support context-dependency memory effect.

The result of this experiment were harmonies with Godden and Baddeley’s research, this fortified the immense reliability of their research, and proved that it could be replicated by others. The results of the experiment magnified the context-dependency memory effect, and supported the hypothesis: “Memory recollection in the same environment in which information was learned will yield higher recollections among participants.”

A laboratory method was ideal for this experiment because it allowed for control over numerous variables, and, it permitted and enabled ease when measuring the dependent variable. Utilising a repeated measures design removed differences that individuals could possibly possess that would rob this experiment of credibility. It could also be argued that ‘the fatigue effect’ –which states that “work …[has] a general effect of running down the bodies limited energy supply” –adversely affected the participants recollection after walking around the Vernon Building (Hockey, 2013). Perhaps this is why only one out of the nine participants recalled more on the second experiment.

The small sample size on nine indicates that this experiment is not generalizable to bigger populations. Albeit the sample had a plethora of nationalities and ages, this suggests that no definite proclamations can be made about nationality or age. Furthermore, a confounding variable could be the sound/noise of police cars driving past the laboratory environment, or, the limited linguistic ability of some participants.

Any further research/study into this topic could be ameliorated by enlisting a grander sample size, or, using both locations as learning and retrieval environments; this provide a deeper insight into context-dependency memory effect. A longer list of words could also be employed to test retention in LTM. 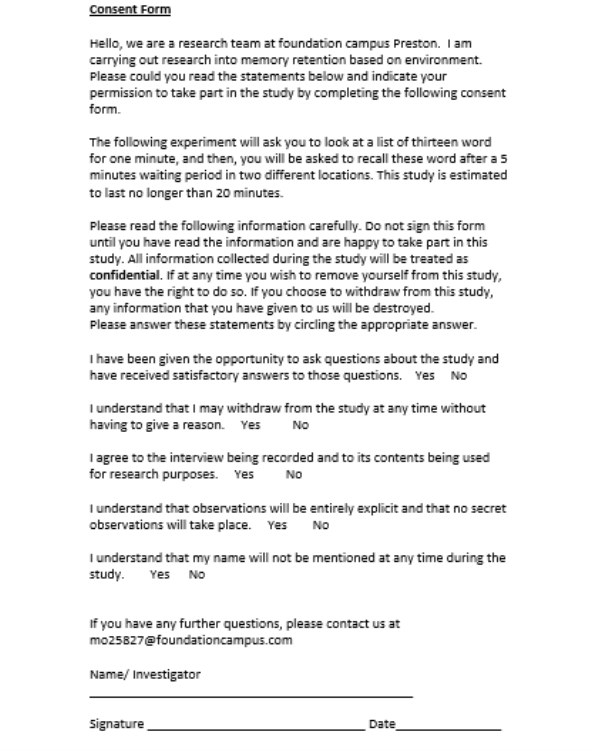 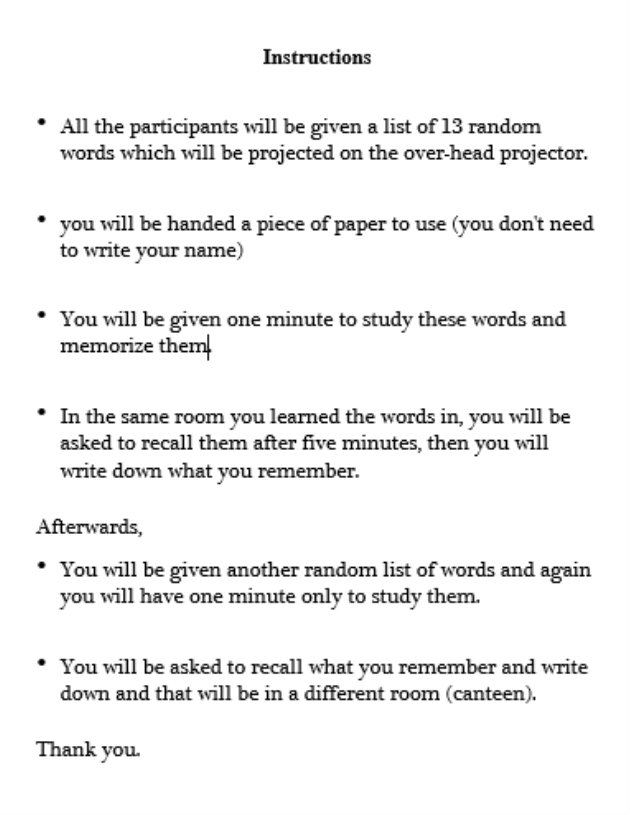 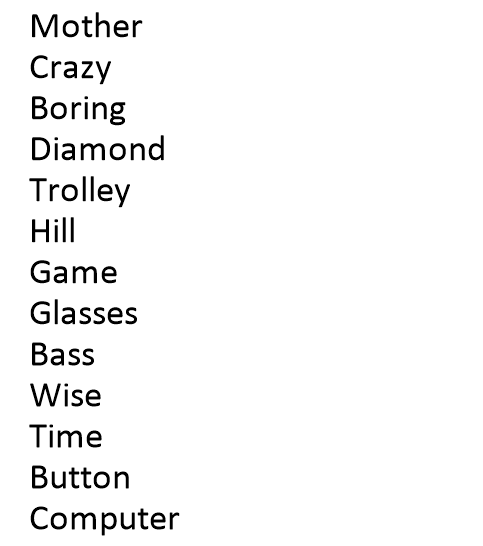 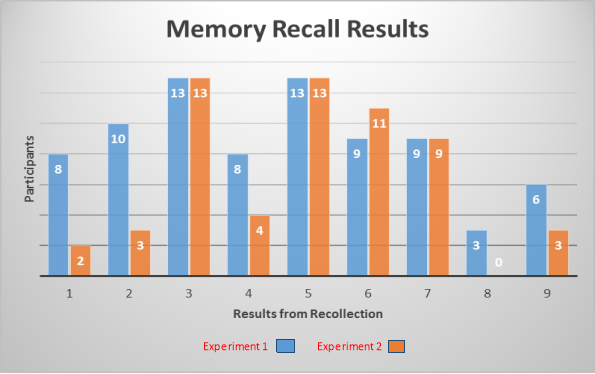