Effectiveness of the persuasive message

ELM (Petty & Cacioppo, 1986) is practical to explain the capability of the persuasive message of “The party’s over” TAC advertisement regarding road safety

Driving attitude of driver is one of the critical factors for road safety, “The party’s over” TAC Advertisement on TV to promote road safety and drive for target audience’s attitude change. The advertisement is aimed at stimulating the conscious thinking of target audience and it leads the target audience to evaluate the media messages through their central route with medium fear of being stopped and caught by Traffic Police Force in series of daily situations of target audience, penalty or suspension of driving license to stimulate the target audience’s conscious thinking to change their attitude in order to comply with the demand for no violation of alcohol level, drug and speed limit of Australia. Adult male and young female are the target segment of the TAC advertisement Assistant Commissioner of the Traffic Policing provided statement to clearly state the Australia regulations for road safety, the regulations are being reinforced and governed by the well-equipped professional almost everywhere and round the clock while you are on the road, it induces that chance of not being caught is much closed to none. The effectiveness of the key messages of the advertisement were very persuasive and the effectiveness of the TAC advertisement is explaining by the EML it can be explained by the Elaboration Likelihood Model (ELM; Petty & Cacioppo, 1986).

ELM (Petty & Cacioppo, 1986) is practical to explain the capability of the persuasive message of “The party’s over” TAC advertisement regarding road safety

Social psychology is the field of studying how human being’s cognition, consciousness, perception and attitude are influenced by the direct or indirect affection of external sources (Allport, 1985). Methodical discussions of theories of persuasion can be searched from Aristotle’s Rhetoric in Ancient Greeks. Hugh amount of scholars had devoted decades of academic life in experiments of persuasion with defined models and theories in social psychology field scientifically in the recent century. Numerous schools of thoughts with scientific studies have contributed to the understanding of persuasion in term of psychological processes and the Elaboration Likelihood Model (ELM; Petty & Cacioppo, 1986) of persuasion is the selected topic for review and discussion. The effectiveness of the selected TAC advertisement is being evaluated and analysed with the underlying principles and variables of EML. A lot of researchers have conducted experiments regarding attitude change were based on the Elaboration Likelihood Model (ELM; Petty & Cacioppo, 1986), because this multi-process theory of persuasion has fully stated the reaction and related affection of the subject by different variables adequately (Petty et al., 2001).

Starting from mid of 1990’s, TV has been selected as the major advertising channel by proper authorities of Australia and New Zealand to reduce the happening of traffic accidents

(Donovan, Jalleh, & Henly, 1999; Tay, 2001). Negative affection of driving attitude, such as fatal and serious damage, has played the major role to strive for the change of drivers’ behaviours and attitude in New Zealand (Tay, 2001, 2005).

This essay stated that psychological research evidence suggests that the Elaboration Likelihood Model (ELM; Petty & Cacioppo, 1986) is useful for explaining the effectiveness of “The party’s over” TAC advertisement in persuading viewers of adult male and young female to alternate their attitudes regarding road safety aspect.

Hogg and Vaughan (2014) defined that attitude is an end deliverable of syndication of belief, rational reaction, emotion, attitude and behaviour with respect to society’s major incidents, matters, groups or symbols. Also, attitude is a common thinking or response or perception regarding other human being(s), matter or incident either good or bad.

Hogg and Vauhan (2014) stated that attitude change is a major alteration of human being’s attitude, also, the persuasion process take into account of communicator, medium and audience as the essential elements. Attitude change can evolve and make person to do something different from current attitude and practice, also, persuasive communication is an influential message with the purpose to alternate the target subject’s associated attitude and behaviour (Hogg & Vaughn, 2014).

Brinol & Petty (2008) stated that successful persuasion is induced by recording the actual alternation of the target subject’s attitude to the expected direction. Regarding variable, it refers to any characteristic of the source, message, target subject or communication mean that can be different in a provided persuasion environment (Brinol, P. & Petty, R. E. (2008). Persuasion variables can change in volume of information processing and influence thinking or influence subject’s confidence regarding those thinking as well as act as disputes or proof or alternate attitudes by providing obvious hints and catechist, also, any provided variable, either portion of the source, information, subject or factor, is able to provide in these roles (Brinol, P. & Petty, R. E. (2008).

Regarding the video of TAC advertisement is the effective communications mean for delivering the simple message of road safety issues, target segment gets no way to escape from violation of the traffic regulation in Australia. Chaiken and Eagley’s (1983) compared the degree of effectiveness of showing messages through the communication means of video, sound as well as written article forms. This has obvious implications for advertising. Which has more impact on consumer: television, radio or printed media? It depends. If the message is simple, as much advertising is, the probable answer is: > video> audio > written. The moderating variable in this context is the relative ease or difficulty of comprehension required of the audience. If the points of a message require considerable processing by the target, a written medium is likely to be best. Readers have the chance to go back at will, mull over what is being said and then read on. If the material is quite complex, then newspapers and magazines can come into their own. However, there is an interesting interaction with the difficulty of the message. When the message was facile to interpret by target subject, Chaiken and Eagley (1983) found that a videotaped presentation brought about most opinion alternation. When the message was hard to interpret, presenting the subject matter in writing form would be more effective than video or audio forms.

The TAC advertisement projects medium degree of fear to target segment, it takes the audience to process the message through their central route with conscious thinking in persuading them to change their attitudes to punishment of toll, fine and suspension of driving license. EML is practical for explaining the effectiveness of the message and the production elements of the TAC advertisement . According to Keller and Block (1995) and in line with dual-process models of information processing when fear is at a very low level an audience may be less motivated to attend to the message because the message does not sell out sufficiently the harmful consequences of an act. As fear builds up and stimulates interest and it draws the subject’s attention to what is happening. However, a very frightening presentation of an idea may arouse so much anxiety even a state of panic, that we become distracted, miss some of the factual content of the message and are unable to process the information properly or know what to do (Hogg & Vaughan, 2014). In the TAC advertisement, Australian male adult and young female were chosen as the actor and actress due to the audience factor, audience of the similar kinds with similar attitude and act would project themselves into the role of TAC advertisement easily.

Assistant Commissioner of the Traffic Policing provided statement to clearly state the Australia regulations for road safety and the regulations were being reinforced by the Police Force in Australia. Expertise was deployed to strengthen the persuasion for road safety by complying the regulations in Australia. EML is practical for explaining the effectiveness of the message and the production elements of the TAC advertisement. The communicator variable affects the acceptability of persuasive messages. Other source attributes engage a portion in whether the subject will take or not accept (Hogg & Vaughan, 2014). Expertise, trustworthiness and status are the key source factors that have positive impact on persuasion. When a high credibility source is deployed as one of the variable for message delivery, a credible communicator becomes very effective in inducing to attitude change.

In Australia, car accidents due to bad driving habits are the major contributor of road safety issues. Male adult and young female are the target segment, which contributes to the major portion of traffic accidents due to the affection of alcohol, drug and speeding. Punishment of toll, fine and suspension of driving license as fear factor was deployed for TAC advertisement, the TAC Advertisement delivered a medium degree of fear to target segment, it tracked the audience to process the message through their central route with conscious thinking in persuading them to change their attitudes. Mr. Bob Hill, Assistant Commissioner of Road Policing, represented the high variable credibility for strengthening the persuasion to comply with the road safety regulations in Australia. “The Party’s Over” TAC advertisement presented the theme regarding the party and deployed sound and video message for persuading drivers to change their attitudes to road safety. Police force is well-equipped with advanced equipment. Straws as the breathalysers, which are the alcohol level testing equipment, lollipops as the drug testing kits, music background with party imagery, and those variables deliver the message to target subject that this is the unpleasant and displeased “Party” that Australian wants. Psychological research evidence suggests that ELM is useful for explaining the effectiveness of the TAC advertisement in persuading adult male and young female audience to change their attitudes to the road safety issue. 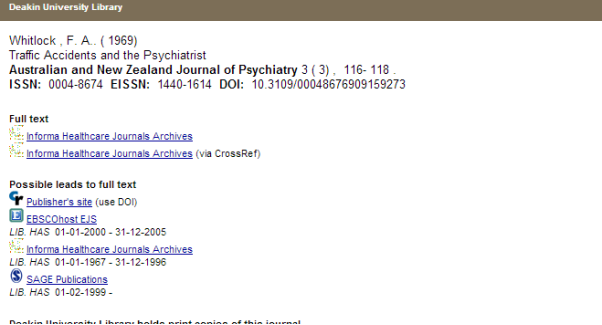