The effect of perceived anonymity upon individual effort in a group task.

Social loafing according to Latané et al (1979) is the decrease in personal effort that occurs when an individual works within a group. However, when people feel as though their input is identifiable they are motivated to exert more effort, thereby mitigating social loafing. (Harkins & Jackson, 1985) In an attempt to discover if this effect could be replicated, an opportunity sample of 52 participants was recruited to partake in an independent measures experiment. Participants were randomly assigned to one of two groups, the public group or the private group. Both groups were asked, via email, to provide suggestions on how their town centre could be improved. The “public” group believed their results would be attributed to them publicly whilst the “private” group were assured anonymity. It was hypothesized that the public group would provide more suggestions than the private group. The “private” condition resulted in a lower mean number of responses (M 3.8, SD 2.6) than the “public” condition (M 6.8, SD 2.22) which supported the hypothesis.

Social loafing is the propensity for group members to come to be less productive as the group size increases (Latané et al, 1979). This effect reveals the converse relationship that exists between group size and an individual’s input to the accomplishment of a task. While examining the association between performance effectiveness and group productivity, Ringelmann (1913) discovered that having members of a group work collectively (in this case, pulling a rope) actually resulted in considerably less effort being applied than when the individual carried out the task independently. Ringelmann also revealed that as more individuals join a group, the group frequently grows progressively inefficient; rejecting the premise that group effort reliably leads to increased productivity. He suggested that groups fail to maximise their potential as several interpersonal processes diminish the group’s overall ability. Williams, Harkins and Latané, (1981) attributed two distinct processes as potential sources for the reduced productivity within groups: motivation loss, and coordination issues. However, group members largely believe that they are contributing to their full potential when asked; evidence has indicated that individuals exhibit loafing without realising (Karau & Williams, 1993). In order to facilitate a reduction in social loafing, several suggestions forwarded.

Kerr & Bruun (1983) state that individuals who exhibit social loafing often fail to contribute as they believe other group members will compensate for them. Therefore, each member of a group should be made to feel like they are vital to the completion of the task at hand. By increasing the individual’s perceived importance of their part of the group, members tend to expend more effort towards achieving the required outcomes.

Harkins & Szymanski (1989) assert that groups that establish explicit goals tend to outperform groups with unclear objectives. Setting clearly defined aims is believed to encourage many production-enhancing processes, such as increased commitment, comprehensive planning and quality monitoring of group tasks, and increased effort (Weldon, Jehn, & Pradhan, 1991). Similar results can be achieved by decreasing the group size; as group size reduces, each members role in the group becomes increasingly integral, so the opportunity to loaf is reduced.

Finally, and the focus of this study, when people feel as though their individual contribution is identifiable, they become motivated to work harder on a group project (Harkins & Jackson, 1985). This is due to the individual experiencing evaluation apprehension, thereby increasing productivity through social facilitation. Social facilitation is an improvement in performance produced by the presence of others, as in the “audience effect” as demonstrated by Dashiell (1935), However, should a project allow individual members to remain anonymous, they feel less anxiety about being judged by others, resulting in social loafing (Harkins& Petty,1982). The research hypothesis for this study is: Participants in the public group will provide more suggestions than participants in the private group.

52 Participants from the experimenter’s friends, family and workplace were asked via email to participate. Participants were assigned, on an alternate basis, to either the “public” or “private” condition. The number of participants in each condition was equal.

Each participant in the first instance was contacted via email to ask if they wished to take part in a research experiment. Participants who agreed were randomly assigned to one of two groups, the “public” group or the “private” group, by means of order of response. For example the first participant to agree to take part was allocated to the “public” group, the second to “private” and alternated thusly until all participants had been assigned a group. Each was then sent, via email, an instruction form relating to their group and a consent form to complete. Each participant was asked to follow the instructions provided and return both the consent form and their responses by email within 48 hours. Once the responses were received the debrief sheet was sent out to inform the participant of the true nature of the experiment and advise them that they could remove their data and consent should they wish to. As no consent was withdrawn all data gathered was utilised. The total number of responses for each participant was counted and recorded under the appropriate group heading on the response collation form for statistical analysis.

The results from the two groups were collected and collated into a table of raw data (See Appendix G). Summary statistics are provided in Table 1 and the mean values are displayed in Figure 1. An independent-samples t-test was conducted to compare the number of responses in “public” and “private” conditions (See Appendix H). There was a significant difference in the scores for the “public” (M=6.8, SD= 2.2) and the “private” (M=3.8, SD=2.6) conditions; t (50) =4.52, p= < .001. These results suggest that if individual believe their input to a group task is identifiable they are likely to exert more effort. Specifically, the results suggest that when participants in a group are monitored, the propensity to “loaf” is decreased. 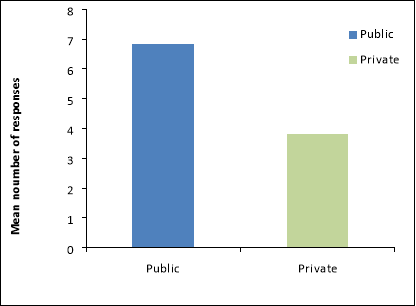 Figure 1. Mean number of responses for “public” and “private” conditions.

The results generated in this study support Harkins and Jackson’s (1985) assertion that identification increases group productivity in that the “public” group provided a significantly higher “response” mean. It also suggests Ringelmann’s (1913) observations and Latané et al’s (1979) “social loafing” may occur even when group members are not physically part of a group.

A possible issue of using an independent measures design for this type of research is the potential for error arising from individual differences between participants, for example it may have been that those selected for the “public” group may have been, in general, more civically minded with a greater personal investment in their home town. As a result the “public” group might return more responses, not as a result of the independent variable being altered but of the individual differences in participants. To mitigate this effect more information would need to be gleaned from participants to ensure equal distributions between groups.

Social loafing and social facilitation, in general, are viewed as distinct lines of research in social psychological literature. It appears, however, that these two phenomena may be closely related as the latter appears to mitigate the former. Further research into the extent to which they interact would be useful in uncovering the depth of the relationship. A pertinent question would be; is there a situation where social facilitation fails to affect social loafing?

Dashiell, J. F. (1935). Experimental studies of the influence of social situations on the behavior of individual human adults.

Weldon, E., Jehn, K. A., & Pradhan, P. (1991). Processes that mediate the relationship between a group goal and improved group performance.Journal of personality and social psychology,61(4), 555.

All Undergraduate, Taught Postgraduate and Research Students registered on any UHI programme undertaking a research project must seek ethical approval via their Project Supervisor prior to undertaking any form of fieldwork or data collection exercise.

Please read the UHI Research Ethics Framework before completing this form and submitting it to your Project Supervisor for approval and signature. Please pay close attention to the guidance notes, as it may be necessary for you to complete another form as part of this exercise.

Further information on UHI’s Research Ethics Policy and the ethical approval process can be found at http://www.uhi.ac.uk/en/research-enterprise/resource/ethics

If the answer to the above question is “Yes”, compliance with NHS Guidelines will be required (see www.nhshighland.scot.nhs.uk/Research/Pages/ResearchEthics.aspx ), and there is no need for you to answer the remaining questions. Please complete and sign the declaration at the end of this form and submit it to your Project Supervisor.

If the answer is “No”, please continue to Question 2.

If the answer to the above question is “Yes”, please answer the remaining questions.

If the answer is “No”, please complete and sign the declaration at the end of this form and submit it to your Project Supervisor.

If you have answered “No” in each case to Questions 3-14, please complete the Declaration and pass this form to your Project Supervisor for approval.

If you have answered “Yes” to any of the questions, please complete Form REC1-D Student and submit it to your Project Supervisor along with this form.

Comments – ‘Approved’ or ‘Not Approved’:

Thank You. Once authorised, please pass this form, along with Form REC1-D Student if relevant, to the UHI Research Ethics Officer

Would you like a copy of the completed report? Yes No

Thank you for volunteering to take part in this project.

Thank you for volunteering to take part in this project.

Thank you again for taking part in this project.

You have in fact been taking part in an experiment into social loafing. You were amongst a group of 40 participants who were randomly assigned to one of two groups, a public group and a private group. The aim of the experiment was to compare the amount of suggestions provided by each group. It was anticipated that the public group would provide more suggestions as they believed they would be identified and as such would not want to appear to be putting the overall performance of the group down, the private group were expected to provide less suggestions as they were not to be identifiable and it would not be known if they provided only one suggestion for the group, and therefore more prone to ‘social loafing’.

The data has now been collated and we did indeed find that the public group provided more suggestions than the private group. These findings along with a report will be written and submitted to the University of Highlands and Islands as part of an assessment carried out by 3rd year Psychology Degree students.

Your personal details will not appear in the final report other than the amount of suggestions provided and you will be referred to by number only.

In order for us to use your data, please complete the attached form and return by email as soon as possible.

Should you wish to receive a copy of the report, please tick the appropriate box on the attached form.

Thank you again for your participation in this study.