A Study of Consumptive Behaviour, Personality Traits and Gender Differences

A general population survey of 1193 people was conducted to ascertain if there was a common core personality or behavioural trait of “consumptiveness” in participants. Consumptiveness refers to the acquisition or consumption of items in an excessive amount. This study examined if excessive consumption of one variable, such as alcohol, tobacco and gambling led to the excessive consumption of another, in line with a theory proposed by Browne (2014). Browne’s study focused on associations between gambling and other excessive behaviours and he posed the implications of excessive consumption on health and wellbeing. In this case the study focused on excessive use of media products (online social networking, video gaming, clothing purchases) as well as appetitive products such as sweets and fast food. The findings of the study showed moderately notable gender differences in the results, as well mild to medium statistically significant results among similar consumption variables that both support and do not support the consumptive trait theory.

A study of consumptive behaviour, personality traits and gender differences

The purpose of this study was to try and ascertain if there is a link between the consumption of different items. If there is a connection, then when people excessively consume one thing (salt, caffeine, sugar, lollies), they are more likely to excessively consume another (purchasing luxury items, gambling, playing video games) and this could potentially be a personality trait of general consumptiveness (Browne, 2014). Browne (2014) looks at “The consumption hypothesis” and proposes that people with the general consumption trait engage in activities that require little output for small, instant rewards or gratification. His study focused on excessive consumption of addictive substances/behaviours such as gambling, nicotine, drugs and alcohol and also appetitive targets like salt, caffeine and energy foods.

Consumer choices incorporate a variety of things and people oft make consumption choices based on their personality types, Wu, Cutright, and Fitzsimons (2011) conducted a study looking at the effects of self discovery, personality and consumption habits. Wu et al. (2011) found that even when self-discoveries were made, participants still made consumption choices that conflicted with the recently gained knowledge. When thinking about consumption of harmful products or behaviours (nicotine, alcohol, illicit drugs, speeding in automobiles) enough research has been done for people to know that the products or behaviours are indeed harmful, yet still engage in consumption of said products/behaviours, so some could argue that there is a personality trend emerging where the consumer goes against better knowledge and judgement for small rewards or positive feelings. Beijers, Burger, Verbeek, Bockting, and Ormel (2014) conducted research regarding continued smoking and alcohol consumption during early pregnancy. Their results found no associations between personality and the continuation of smoking, which goes against the prior theory, but links were found regarding the state of mental health of the participants such as anxiety and depression instead. Though with the general knowledge that smoking cigarettes is addictive, can that and also consumptive behaviour be put down to addiction or having an addictive personality? (Which the existence of is hotly debated). In one study on men with excessive alcohol consumption, the question was asked if they had an addictive personality (Berglund et al., 2011). The results came back that they did not, and shared the same personality traits as the general population. With that being said, could the general population have underlying consumptive tendencies in their personality varying in different levels?

Being shown that persons still knowingly participate in potentially harmful or dangerous behaviour, Hong and Paunonen (2009) researched personality traits and health risk behaviours (substance abuse and use, dangerous driving and unhealthy eating habits) and used a sample of university students as participants. The results showed that the participants who engaged in the behaviours had low conscientiousness and agreeability personality traits, which was interesting with regards to this study as it assists in determining that common personality traits can predict behaviours.

Looking at the varied range of results discussed above, there aren’t any solid common findings regarding personality traits, consumption and behaviour as yet but the ideas are there. So to continue the Browne (2014) consumption hypothesis, this study focused on investigating the consumptive personality trait theory. If the theory is proved correct there should be a positive correlation between harmful substances (gambling, nicotine, alcohol) and media consumption (video games, online social networking, purchasing luxury items). Also going on the general consumption trait, we would expect to see a correlation between instant reward appetitive targets salt, sweets, fast food and caffeine as well as a correlation between the purchasing of items (clothing, magazines and collectables) which also provide instant gratification to the consumer.

A total of 1437 people responded to the study. Those excluded included 80 participants whom where under 18 years of age or did not provide consent, as well as 164 participants that only partially completed the survey. The final sample was made up of 1193 adult respondents from the general population. Ages ranged from 18 to 90 years with a mean age of 32.27 years. The sample consisted of 324 males (M = 30.76) and 862 females (M = 32.76), with seven participants choosing to not reveal their gender.

A general population survey was considered the most appropriate approach in which to test the hypotheses and gain more insight into the general consumption hypothesis as stated by Browne (2014). Participants were directed to a specifically created online survey hosted by SurveyMonkey.com by means of online social networking, email and direct methods. The survey was done on a voluntary basis and participants had to provide informed consent, and select that they were over 18 years of age to progress through to the questionnaire component. The Central Queensland University Human Ethics Committee approved this survey, and the participants had the option to exit the survey at any time with no resulting penalty.

The survey incorporated 19 questions, 13 of which were close-ended quantitative items measuring general and media consumption, 2 quantitative with an open-ended scale and four demographic questions. The demographic questions included the age, gender, income of the participants and also an optional question with regards to Aboriginal and Torres Straight Islander status (Aboriginal, Torres Straight Islander, Australian South Sea Islander or None of the above).

Online social networking and extracurricular mobile/tablet usage was calculated on an eight point opposite scale compared to other questions, ranging from at least once an hour, several times a day, once a day, several times a week, once a week, once a month, less than once a month and never. Gambling habits were measured on a six point scale with responses ranging from never, monthly or less, two to four times a month, two to three times a week, four to five times a week and six or more times a week. Determining cigarette consumption per day of participants used a nine-point scale of multiple daily usage options.

The fast food consumptive variable measured the previous weekly intake {never, once 2-3, 4-5, 6-7 and more than 7 times}. Video game usage per week was measured on a nine-point scale with hourly-based selections and nil. Finally, an open-ended scale was used for the questions how many serves of vegetables/fruit do you eat on a usual day, where the participants could enter a numerical value.

Gender differences were examined for each of the primary variables using a series of independent-samples t-tests. As shown in Table 1, males and females differed in their self-reported consumption of caffeine, clothing items, collectibles, general interest magazines, gambling products, vegetables, fast food and alcohol, as well as their use of social networking services and video games, and reported income (all ps < .05). No statistically significant differences between males and females were reported for salt intake, consumption of confectionaries (sweets), fruits, cigarettes, or the use of smart phone devices (all ps > .05).

The distributions of responses on a number of the primary variables did not meet the assumptions of parametric testing and were assessed by a series of (non-parametric) correlations (Spearman’s rho). The results are reported in Table 2. For each pairing, Spearman’s correlation coefficient (rs) is reported as the top value. 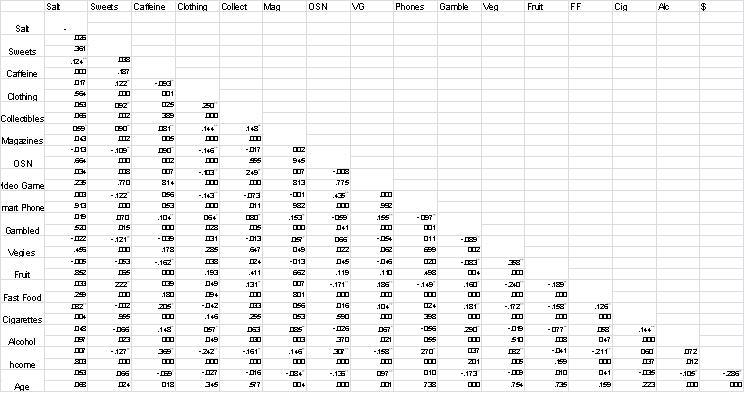 The results showed some statistically significant small to medium correlations between the variables. With regards to our hypotheses and the general consumption theory, most of the correlations were in the same categories, such as a positive correlation between appetitive targets sweets and fast food, and fruit and vegetable consumption as well as between technological products, in particular smart phone usage and using online social networking. The results did show a small positive correlation between video gaming and collectables as well as clothing and collectables, this is in line with the type of results that Browne (2014) received. These results support the idea that people are more likely to consume items in the same or similar categories but not other categories in a highly noticeable amount like this paper had hypothesised.

A more interesting secondary aspect of the results is the gender differences noted between consumption of items and media products. Male participants were shown to be more consumptive than females in the areas of caffeine, video gaming, collectables, social networking, alcohol, gambling and fast food. With females being more consumptive in clothing, vegetables and magazines.

It can be acknowledged that the design of this study was limited by means such as delivery format being only attainable to online media users, and that the gender and ages of the participants are not fully representative of the population. Due to being in a survey format, a sample bias could also be taken into account. In order to gain more insight on the consumption trait theory more research is needed. Future researchers could incorporate a broader range of consumption items to suit a more varied range of age groups as well as targeting participants already excessively consuming in a particular field (such as purchasing clothing items or playing video games excessively), and from there ascertain if they excessively consume in other fields. A control group sample of the general population could also be incorporated in a future study for comparison to the excessive consumer participants. Other personality traits such as addictiveness or impulsiveness could also be taken into account in the research so as to clearly define the difference between those and “consumptive” traits. Referencing back to the study conducted by Beijers et al. (2014), The participants showed signs of mental health concerns such as anxiety and depression with relation to their continuation of smoking during pregnancy, when thinking about excess consumption, mental health factors like these could also promote consumptive behaviour to receive instant reward and fulfilment, so behaviour could purely be situational. Reflecting on the gender differences noted in this study, some further possible avenues could also include ascertaining if there is more likely to be a “consumptive trait” in one gender over another.

In sum, although our hypotheses were not fully supported in the study, there were some statistically significant correlations that supported the Browne consumption hypothesis, but more solid results are required. As found in the article by Hong and Paunonen (2009) personality factors and traits can assist in predictions regarding behaviours, especially those that can pose risk to health. So further more detailed research and insight into a behavioural consumptive trait could potentially aid in improving existing knowledge regarding the vastness of human personalities, and should not be discarded.