Pete is a 34 year old male, self-referred to therapy due to his recently developed fear of dogs that is disrupting his work and social life. He also feels distressed by his recent separation from his partner Sarah, which he attributes to job promotions and extra work responsibilities. Pete appears to be consuming large amounts of alcohol on a daily basis and has become solitary in an attempt to manage his feelings of low mood, hopelessness and fear. Based on developmental theories (Freud 1905, Erikson 1950, Bowlby,1969), research suggests that’s individuals are deeply influenced by physical and emotional experiences, as well as the emotional atmosphere they are exposed to in early life (Kegerreis, 2010). Consequently, the most beneficial orientation to help explain and overcome Pete’s obstacles would be from a psychodynamic approach. This is a suitable orientation for this client as it addresses the past influences on Pete’s current fears and anxieties.

Further background information, reveals Pete is the youngest of two siblings and has never suffered from phobic episodes or holds history of any previous mental instability. Importantly, Pete recalls parental tension and conflict throughout his childhood up until his parents divorced when he was aged 11 and also expresses a divide between himself and his father caused by family tension, which is still relevant today (See Kalmijn, 2013). Most significantly, Pete recalls a particular memory from his childhood in which he spent a uncomfortable weekend at his father’s home and only gained comfort through spending time with his father’s Alsatian dog.

Based on the underlying influence of past events throughout Pete’s childhood, the preferred psychotherapeutic orientation for this client’s clinical formulation would be based on a psychodynamic theoretical perspective. This psychodynamic formulation acknowledges that it is through predisposing factors that Pete may be experiencing an underlying unconscious fear of relationship breakdown. A fear that is precipitated by both conscious and unconscious thoughts and feelings that stem from his childhood and are increasing levels of anxieties regarding his relationship breakdown with wife Sarah. It is reasonable to presume that the current trouble between himself and his wife, thought to be caused by extra work responsibilities, has resurfaced these childhood memories consequently triggering his new found phobia of dogs. As this is a completely new phobia it can be suggested that it is actually a displaced fear based on experiences within his past and further perpetuated by memories of his parents failed relationship.

Freud (1915) believed that all human behaviour has a significant meaningful and motivated purpose in which anxieties and fears are very often connected with a combination of hidden feelings from the past. Often these feelings from childhood become repressed and proceed to manifest themselves as other negative symptoms in adulthood. Seemingly obscure behaviours, such as Pete’s recently developed fear of dogs, can attempt to be explained by unconscious motivations from which hidden meanings can be interpreted and it is reasonable to presume that the initial fear of which Pete has sort help for was triggered by feelings of anxiety and stress brought on by his increased employability responsibility and the impact this had on his current martial relationship. However, Pete’s fear of dogs is not the leading concern and there appears to be one central pervasive issue underlying the current problems in Pete’s life which can be traced back through his personal history. Reinforced through the use of Malan’s (1995) Triangle of persons as a means of relating transference matters between Client and therapist, it can be observed that Pete possesses a main underlying fear of relationship breakdown which has manifested itself as a displaced fear of dogs, subsequently based on Pete’s childhood memories, lack of relationship with his father and feeling towards him as the main antagonist in his parents failed relationship.

Supported by research (Cui & Fincham, 2010), it appears that Pete is predisposed to possess such fears due to influential events in his childhood, mainly the breakdown of his parents relationship and the tensions and conflicts this created as a result, further reinforced by his mother’s recalled negative view that “marriages never work.. they just end in hurt”. In an unconscious attempt to resolve these problems and alleviate symptoms of anxiety Pete has begun utilising the consumption of alcohol in an attempt to remain in control over his life. However this behaviour is in fact maintaining and reinforcing Pete’s problemsand a basic principle of the Psychodynamic model proposes that internal unresolved conflicts derived from early childhood development tend to repeat themselves in adult relationships if not resolved. These maladaptive behaviours are further perpetuating his current problems and increasing Pete’s fear and belief that this relationship breakdown is out of his control and the past will indefinitely repeat itself.

As based on the rationale that an individual’s behaviours and cognitions are influenced by unconscious thought processes and emotions from within the clients past , it is suggested that psychoanalysis would be the most beneficial treatment. The classical technique of psychoanalysis is based on conflict theory (Erikson 1950) and places emphasis on both the past and present with the aim of making the unconscious conscious. It is also widely renowned for its ability to help clients develop insight into the cause of deep-rooted problems that stem from childhood through the exploration and clarification of the clients expressed thoughts and feelings (Compton, 1990).In this way Pete is encouraged to engage in free association and express any thoughts that arise during the session. This allows the therapist to try and reveal the unconscious thoughts and memories possessed by the Pete, in order to make sense of the origins of the problem Throughout the sessions Pete will also be encouraged to engage in transference and transfer feelings he has towards important people in his life, such as his parents onto the therapist as a means of understanding the influential relationships within his life (Freud, 1914). In order to represent the interactions between these elements diagrams shown in Figure 1 an 2 (See Appendices) will be utilised (Malan, 1979,1995). It is generally proposed that Pete would attend around 4 sessions a week in order to provide a setting to explore these unconscious patterns, and try to make sense of them solely concentrated on the achievement of a cathartic experience through analysis. 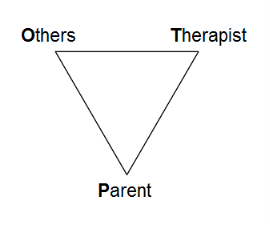 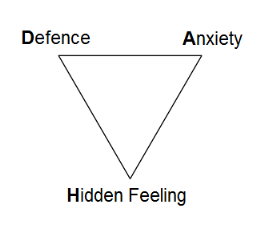