Decision-making processes occur continuously in our daily lives. Some decisions do not require much thinking, such as putting on your shoes before leaving the house. These decisions are almost automatic. Other types of decisions require more rational thinking. Pros and cons are weighed out, and the option that yields the best outcome is chosen. However, cognitive psychologists have found that rational decisions are not always the sources of our decisions. Decision-making processes can be influenced by many external factors; Tversky & Kahneman (1981) found that decision-making processes can be largely and significantly influenced depending on how a specific problem is framed. Tversky & Kahneman (1981) based their study on the expected utility model, the major theory of decision-making under risk, and brought about the prospect theory. The latter states that people make decisions not based on the final outcome, but on the potential value of losses and gains. More specifically, certain heuristics come into play during decision-making processes, and they can be used and manipulated to influence people’s decisions. An interesting phenomenon that was discovered was the ‘certainty effect’ (Tversky & Kahneman, 1981): it is the tendency to overlook outcomes with a certain, or guaranteed, outcome and choose outcomes with a merely probable outcome instead. This effect influences people to take risky decisions where large losses could occur, or to avoid risky decisions where guaranteed gains could occur. Therefore, framing a problem, or the creation and manipulation of a specific context can largely influence decision-making processes. Because of the relevance and importance of prospect theory and the certainty effect, an experiment similar to the ones used by Tversky & Kahneman, (1981) will be described and analyzed.

The experiment consists in a ‘wheel of fortune’ type of game. The wheel is made up of two parts: one in green, which corresponds to the probability of winning, and one in red, which corresponds to the probability of losing. The specific percentages of winning/losing, along with the according amounts of money which can be won/lost, are shown on the left bottom corner of the screen above the ‘gamble’ button. On the other bottom corner of the screen, the guaranteed amount is presented. The latter can either involve gaining or losing a guaranteed amount of money. Participants start with $1000, and the goal is to end up with the most amount of money; the participants’ amount of money is shown in the top left corner, which is updated after each trial, according to whether participants won or lost. The experiment is made up of 32 trials, and on each trial, participants must decide between two options: either they gamble (by pressing the ‘Gamble’ button on the left), or they go with the guaranteed amount (by pressing the ‘Take Sure Thing’ button).

The main hypothesis of the experiment is that the proportion of gamble choices will be higher for guaranteed loss as compared to guaranteed win. More simply, participants will opt to go ‘all in’ even if the odds are against them, instead of picking the safer guaranteed outcome (win or loss). 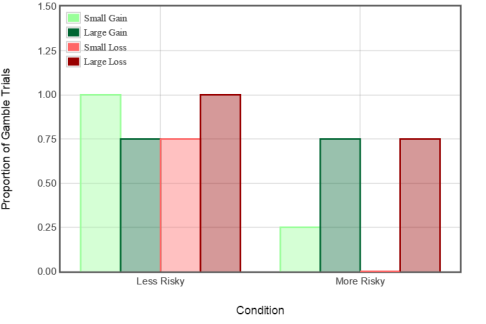 (Figure 1 – Proportion of times of ‘gamble’ choice rather than guaranteed gain or loss for each type of trial.) 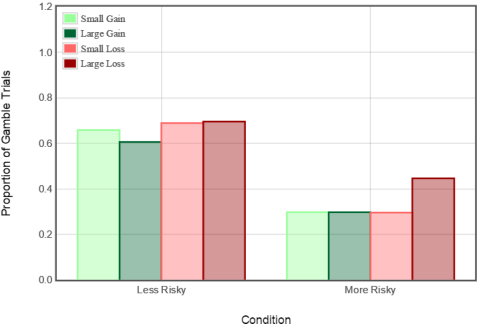 (Figure 2 – Proportion of times of ‘gamble’ choice rather than guaranteed gain or loss for each type of trial.) 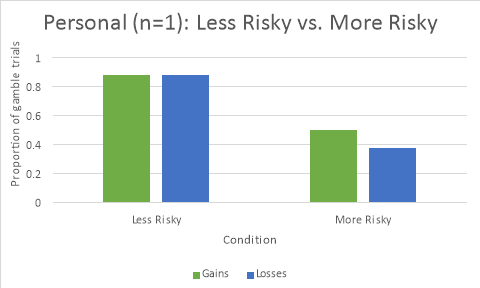 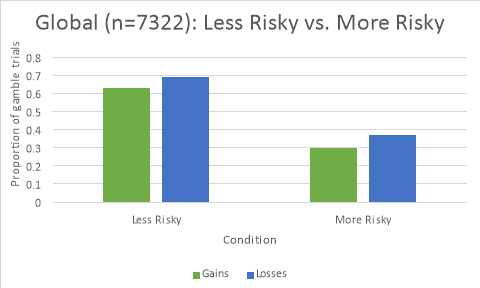 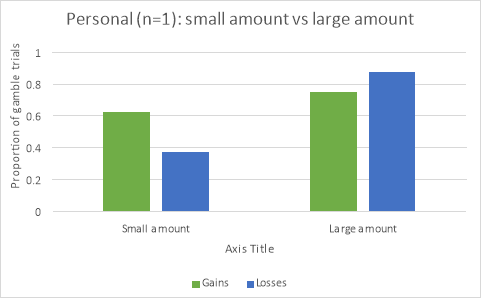 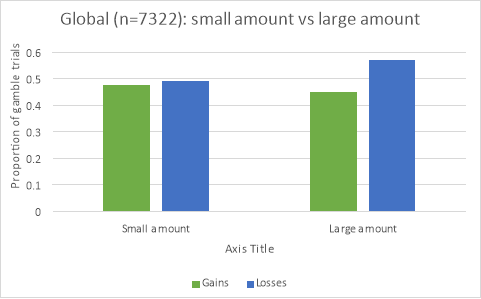 Framing a specific problem can influence people’s decision-making processes. With regards to the personal data, it initially seemed that the hypothesis was not proven. The proportion of times gamble trials where chosen was higher when guaranteed gains were involved. However, the opposite effect was found for the global data, therefore proving the hypothesis. After having further manipulated the data, it was found that the hypothesis was consistent with the global data, and that both in Less Risky and More Risky conditions and trials where small and large amounts were involved there was a higher proportion of gamble trials. This was also found with the personal data for trials where large amounts of money were involved.

Prospect theory states that there are external factors which influence decision-making processes. While there are many factors that could potentially have an effect on people’s decisions, I will focus on a few that were not covered in the experiment.

People with certain personality traits are more prone to make risky decisions. Penolazzi, Gremigni and Russo (2012) made participants carry out the ‘Columbia Card Task’, answer some questions about the task and fill personality questionnaires. They found that “participants who scored highly on the Impulsivity trait engaged in riskier decision-making” (page 655) and that participants “who scored highly on the Reward Responsiveness trait were found to be sensitive to variations in gains and losses” (page 655). Participants with different personality traits made different kinds of decisions. Therefore, it is an important factor which should be taken into consideration, as we all have different personality traits. Further research in this area could find more definitive links between personality traits and the effect these traits have on decision-making processes. Other researchers have investigated decision-making tendencies of patients with disruptive behavior disorders (DBDs) and predispositions to substance dependence (SD) (Schutter & Bokhoven & Vanderschuren & Lochman & Matthys, 2010). They made participants carry out the ‘Iowa Gambling Task’, which is conceptually similar to the task of this experiment. Shutter et al (2012) found that participants with DBD and SD engaged in significantly more risky choices than the healthy control group and participants with DBD and without SD.

On a similar note, Matthies, Philipsen and Svaldi (2012) wanted to investigate risky decision-making and its connection with emotional states in ADHD patients. They made participants (adults both with ADHD and without) do the ‘Game of Dick Task’ without and after boredom induction. The findings showed that ADHD patients chose the disadvantageous options significantly more than the control group. A behavioral disorder such as ADHD can therefore influence one’s decision-making processes. More studies could be carried out on this specific subject in order to reach more valid conclusions, so that ADHD patients can be helped accordingly, while taking their decision-making tendencies into consideration. It is clear that both personality traits and mental disorders affect people’s decision-making processes. With the ever-growing list of mental disorders, and understanding of personality traits, there is a vast amount of research which can be carried out. A peculiar study carried out by Reyna, Chick, Corbin, and Hsia (2014) found that intelligence agents “exhibited larger framing biases than the students, but also were more confident in their decisions” (page 76). These findings are both fascinating and somewhat worrying. Further studies may find consistent links between certain mental disorders/personality traits and decision-making tendencies. These findings may help in treating patients more efficiently, and investigate whether experts who have to make important decisions on a daily basis are also susceptible to framing and decision biases.