After World War Two we saw a departure from Classical Economics and Growth Theory to Modernisation Theory. The Theory reflected both a changing international political circumstance and developments made in social science circles with the journal Economic Development and Cultural Change publishing the social scientist's findings of their Modernisation research . Walt Rostow presented his thesis on Modernisation theory looking at it as a five-stage process, showing countries moving from traditional societies to modern societies, the last stage for Rostow being "The age of 'high mass consumption'" (Hopper, 2012), which is when a country maintains high economic growth for an appropriate length of time. It follows the general principles of the Modernisation theory that it is a linear process of changing older traditions, methods and structures that countries have previously followed. Rostow believed that a way for Developing countries to benefit from Modernisation was for aid from developed countries to be sent to these countries so that they could gain some productive investments. The Marshall plan and the Alliance for Progress in Latin America were programs that were influenced heavily by Rostow's theory. The Alliance for Progress was established between America and Latin America to promote economic and political development within the countries (Ish-Shalom, 2004). The Alliance had a few successes, for example growth in regional output in Latin America increased by 0.4% per capita, however during the 1960's 13 of the governments within the alliance were taken over by a military dictatorship leading an abrupt failure of the alliance. By the end of the 1960's the theory of Modernisation was under attack, a main reason being because many believed that the theories linear view dismisses the extent to which societies can be very diverse and different to other countries, especially those in the west, as these countries may fight change and resist changing their traditions, as it is assumed by authors that Third World Countries are traditional whilst Western countries are developed. In his book, John Martinussen talks about how some Modernisation theorists assume that because the model has worked in developed countries it will automatically transfer to work in developing countries (Hopper, 2012). Similarly, these ideas of development hugely downplay the level to which international conditions could impede development in the South. Structuralist's would argue that developing countries are powerless to control their own futures because modernisation theory was to focused upon endogenous factors that it overlooked external factors due to the international economic order.

Structuralist's focused on the structure of the international economy to look for patterns of the level of development in countries around the world. The theory is influenced by Keynesian which is a critique of classical economics and talks about how states rely upon government intervention and having a mixed economy, and that to become developed states should focus on achieving this, as the belief was that it would stimulate the economy and development within the country. The belief relied heavily upon governments in developing countries encouraging industrialisation through support such as financial help. Therefore, like modernisation theory we can see that structuralism shares a belief in industrialisation in a countries development. Also, the structuralist approach is rooted in Latin American experience, where the countries were very critical of international trade and there were attempts to discover and explain the lack of development in the area. Raul Prebisch looked at the idea of there being a "structural rift in the international economy" (Edgar J. Dosman, 2012) in which Latin America sat on the edge of this "rift" as it had the function of being able to provide natural resources, mainly serving those countries in the centre. With assistance from Prebisch CEPAL developed a theory of economic development for Latin America. This approach was based upon the ideas that development should not be copied from Western countries but instead established so that it represents the reality within the developing country. It also believed that protectionist policies should be adopted, such as importing tariffs on imported goods, as without such policies these countries would struggle to survive in the international free trade market as they would be in direct competition with western countries. CEPAL concluded that development, in Latin America at least, needs to take place within a Capitalist system and that countries that produced industrial goods would grow faster than those which specialised in primary commodities. Some structuralist's held that countries of the Global South could overcome the unintentional restraints put on them by the already developed countries through trading between themselves (Hopper, 2012). Therefore, Structuralist's would advocate a policy of Import-substitution industrialisation (ISI) described by Valpy Fitzgerald as being "state-led industrialization", when CAPEAL was formed the organisation continued to push ISI as it was dealing with the shocks felt within Latin America from the disruption of international trade because of the Great Depression through World War Two, and by the 1950's CEPAL wanted to create a "region-wide market that would capture economies of scale in production." (Love, 2005). Manufacturing in Latin America increased yearly by 6.3% (Sheahan, cited in Hopper 2012), showing that this structuralist approach had a positive effect in this area of the Global South, however some manufacturing industries in countries with small domestic markets struggled as they had limited population size to market their goods too and were further limited by the populations low incomes, leading to reductions in foreign exchange earnings so these industries would struggle to afford the technology needed to manufacture their goods which ISI was reliant on to work. ISI also ignored bureaucracy and corruption that have been a part of the states and governments throughout the world. Overall there were too many faults with some structuralist's ideas and Latin America abandoned ISI after the debt crisis in the region in 1982.

After the slow dissolution of ISI in Latin America, with a worsening debt crisis and terms of trade for primary products deteriorating a new approach, Dependency Theory, began to come to light from radical and neo-Marxist's who began with critiquing both Modernisation and Structuralist theories. Their general argument is that Capitalism in the international community produces increased inequalities in levels of development allowing the North to exploit and extract wealth from the South. Paul Baran, a Development academic, considered this structure as "the morphology of backwardness." (Bellamy Foster, 2007). Within Latin America André Gunder Frank argued that the lack of development within these countries can be directly connected to development in other areas of the world, this is through looking at a Capitalist world system characterised by a centre-periphery dichotomy where Latin America sits on the periphery with the countries of the North in the centre, the result of this dichotomy being an unequal exchange in the international market with the North becoming developed and dominating and the South being underdeveloped and dependent. A conclusion from dependency theorists seemed to be that capitalism needs to be abolished if underdevelopment is the result of a capitalist society. However, a challenge to the theory emerged when newly industrialised countries could almost be seen to be bridging the gap in the dichotomy, Immanuel Wallerstein disagreed slightly with dependency theory and stated that the dichotomy had three levels; centre, semi-periphery and periphery, Wallerstein developed World-systems theory. This theory sought to explain the central-periphery dichotomy produced by the Capitalist system, Wallerstein offer a more fluid concept of the dichotomy saying that it is possible for countries to move in and out of these categories whether it be due to development or economic decline, this can account for the change in countries such as China and India (Hopper, 2012). However, critics would argue that despite Wallerstein's theory that Dependency theorists underplay internal and natural causes of underdevelopment. During the 1980's Latin America witnessed an economic crisis leaving the areas "GDP growth rate as 1.1% whereas its overall growth rate of its per capita GDP was negative" (Shixue, 2008). This was due to flaws from the ISI model and corruption within the region by officials. Also, many claim that the theory fails to provide answers to developing countries predicament, as the theory states that dependency is a root cause of their underdevelopment but provides no escape. There is either a need for developed countries to disconnect themselves from the international market or for a creation of a new international economic system. Therefore, Dependency theory provides little hope to developing countries.

In conclusion when analysing the different theories of development it is apparent that all the three main theories can be recognised as having some influence within developing countries. 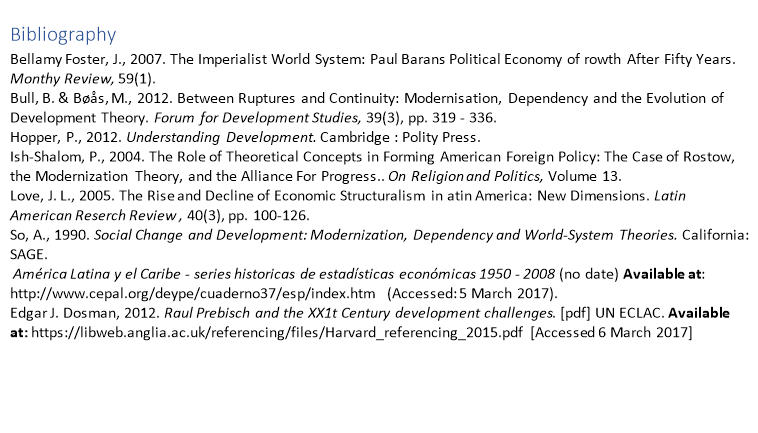