The Seventeenth Amendment, Senate Ideology, and the Growth of Government

The 17th Amendment disturbed the existing electoral system in the United States by requiring direct elections for state Senators. Scholars have argued this made the Senate more populist and contributed to the growth of government in the US post-1913. We employ econometric tools to investigate whether the time series of mean ideology of Senate and its winning policies experienced a structural change around the time of the enactment. We find no compelling evidence of a structural break at that time but do find evidence for a change in the mid-to-late 1890s.

Acknowledgments: The authors would like to thank Edward J. Lopez and participants at the 2012 Southern Economic Association meetings in New Orleans for helpful comments and suggestions.

The Seventeenth Amendment, Senate Ideology, and the Growth of Government

The 17th Amendment to the US Constitution established that Senators were to be directly elected by popular vote rather than appointed by state legislatures. The amendment ended a generation of state-by-state battles attempting to bring Senate elections under popular control. Although its 1913 passage is regarded by historians as enhancing democratic accountability, Zywicki (1994) argues that the amendment helped erode federalism and the separation of power. As Senator fidelity moved towards the electorate and away from protecting states’ interests, the Senate became as populist as the House, thus paving the way for government growth. In making this argument, Zywicki is attempting to contribute to one of the biggest questions in public economics: the dramatic increase in government in the United States during the 20th Century (Higgs, 1987; Husted and Kenny, 1997; Lott and Kenny, 1998; Holcombe, 1999).

This paper empirically investigates whether the Senate experienced an ideology shift as the result of the change in political allegiance. If the interests of state legislatures and the median voters sufficiently differed, we expect to find evidence of a structural change in Senator and winning policy outcomes on roll calls at or near the time of adoption of the 17th Amendment. We examine this hypothesis by subjecting the time series of Senator and winning policy ideology to a battery of structural break tests. The evidence presented here suggest that a break most likely occurred during the 54th Congress (1895-1897), suggesting that the 17th Amendment merely codified what had already occurred through other means.

continuum, where negative scores denote liberal and positive denote conservative values (also analogous to greater or less government intervention in the economy). Zero implies centrist leanings, whereas score magnitudes reflect relative ideology strength. Each chamber since 1789 receives a mean score for legislators and winning policy outcomes, allowing for an overall assessment of ideology with respect to legislator behavior and the nature of enacted policies.

We employ the DW-NOMINATE (dynamic, weighted) score subtype, estimated using normally distributed errors. The entire series contains 112 biennial observations, one for each Congress. The DW scores are comparable between Congresses, but comparisons only make sense within one of the three stable two-party periods in US history. We focus on the most recent such period, the Democratic-Republican (46th-112th Congress), since the formal adoption of the 17th Amendment occurred during the 63rd Congress (1913-1915). The operational database thus contains 67 observations ranging from 1879 to 2013 (Fig. 1). We exploit this dataset to search for structural changes in the series of mean Senator ideology and mean winning policy coordinates.

Structural change implies a sudden shift in any or all of the model parameters that control for the series mean and variance. In the current context, a structural break in either series would be indicative of mean “jumps” in chamber or winning policy ideology, whereas a break in variance implies a volatility shift not unlike, for instance, the Great Moderation. If the 17th Amendment instigated higher growth of federal government, one should observe a structural break in ideology in the 63rd Congress, presumably to the ideological left. While a visual inspection offers little in terms of inference, the diagnostics indicate that the mean chamber ideology is lower (-0.056 versus +0.01), and SD is approximately two times larger pre-Amendment. For mean winning outcomes, the average is higher pre-Amendment (0.037 versus -0.07), and the sample SD is exactly halved afterwards.

We let both series evolve according to an AR(1) data generating process with drift and a deterministic linear trend:

are serially uncorrelated errors and lag number is determined by Akaike and Schwarz Bayesian Info criteria. The structural change in series mean comes from breaks in drift

parameters, while series’ volatility is largely dependent on error variance

The econometrics of structural change underwent significant development in recent decades. The classic Chow (1960) test treats the breakdate as exogenous and a priori known. However, the current standard practice is to let the breakdate be an estimable endogenous parameter (Hansen, 2001). Quandt (1960) proposed taking the highest in the sequence of Chow F-statistics across all possible dates as the breakpoint, but the critical value asymptotic distribution for such a test was not available until Andrews (1993). Andrews’ now-conventional approach to testing for structural break rests on the “sup” methodology, in which the maximal significant F- (supF) or Wald-statistic (supW) across all observations is the most likely breakdate. Andrews and Ploberger (1994) further consider the averages and exponents of these test statistics.

We use the supW-statistic, which has the advantage over supF in that it allows for residual heteroskedasticity. All statistically significant supW-statistics represent possible breakdates, but only that which minimizes the model sum of squared errors (SSE) is the most probable candidate (Hansen, 2001). In testing for and dating structural breaks in the series’ variances, the same methodology follows for equation (2):

Finally, the existence of breakpoints could erroneously lead to the conclusion that the series is nonstationary. We then use the Zivot-Andrews (ZA) (1992) test to distinguish between structural break and random walk disturbances. Conventional unit root tests tend to under-reject the null of nonstationarity in the presence of a break, while the ZA procedure allows for existence of one endogenously determined structural break in trend or intercept in testing unit root. Since neither series seem to be trending, we allow for an intercept break only, within 10% trimmed data.

Some caveats are in order. First, the power of structural break tests is lower in smaller samples. Although a test statistic modification is possible, it is computationally costly (Antoshin et al., 2008). Second, the Quandt-Andrews procedure assumes regressor stationarity. As a solution for nonstationary regressors, Hansen (2000) proposes a “fixed regressor bootstrap.” Third, small sample size makes it impractical to search for multiple breaks simultaneously, even though an event such as women’s suffrage would make for a plausible structural break from public choice theory standpoint. Lastly, we recognize that structural break test results may be sensitive to model specification.

Table 1 summarizes our findings. In the case of mean Senate ideology, none of the supW-statistics, in any form (level, average and exponential), are significant at usual levels within 5, 10 and 15% trimmed data, so we find no evidence of a structural break. We also find no significant variance shifts. The ZA test rejects nonstationarity in favor of an intercept break in the 54th Congress (1895-1897). Although this date comes closest to the breakdate in the Quandt-Andrews procedure, it remains statistically insignificant.

For the mean of winning policy ideology, the maximal significant supW-statistic also falls in the 54th Congress. Plotting the SSE from equation (1) over time, we observe the global minimum to fall in the 64th Congress (1915-1917). The ZA test allowing for an intercept break rejects nonstationarity at the 3% level, and also gives the breakdate as in the 54th Congress.

Turning to variance shifts of mean winning ideology and repeating the same procedures on equation (2), we reject the null of no breakpoint at 4% level within 5, 10 and 15% trimmed data, with the maximal statistic during the 54th Congress. The SSE for variance breakdate (from equation (2)) exhibits multiple sharp drops indicative of a breakdate, with a global minimum in the 97th Congress (1981-1983). Overall, the evidence overwhelmingly suggests that the most probable breakpoint for mean and variance of winning policy ideology, as well as some evidence for chamber mean ideology, occurred between 1895 and 1897, in the 54th Congress.

In his analysis of the political economy origins of the 17th Amendment, Zywicki (1994) notes that it was in the 1880s where dissatisfaction with the indirect system began to escalate. During this period, many states began to employ extra-constitutional means to move towards popular election of Senators (Riker, 1955). These approaches – public canvass and pledged state legislators –allowed for direct public participations in Senate elections. Our results provide some evidence that these approaches or other contemporary changes led to a change in ideology of the mean Senator, not the passage of the 17th Amendment. This finding suggests that while much the growth of in government occurred during the 20th century, the underlying ideological and institutional changes likely began in the Civil War and its aftermath (Higgs, 1997; Holcombe, 1999).

Quandt, R. (1960) Tests of the hypothesis that a linear regression obeys two separate regimes, Journal of the American Statistical Association, 55, 324-330. 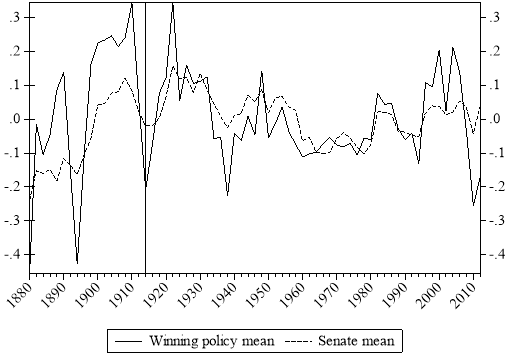