Caffeinated products such as tea, coffee, chocolate, and more, have been around for centuries, but as their popularity continuously increases, many persons have become concerned about the harmful effects these items may have on our health. Nowadays, parents warn their children that if they drink too much coffee or Monster brand energy drink, they’ll have a heart attack; and in Sweden, the sale of energy drinks to minors under the age of fifteen is banned (Hamblin, 2013). This begs the question, however, is caffeine really as dangerous as people make it out to be?

First of all, what is caffeine? Caffeine is a natural stimulant, meaning that it is a substance that increases energy in the body. This makes us feel less drowsy and more focused, which is the reason why coffee is a morning requirement and a preferred study-buddy for many persons all around the world. There are a wide variety of caffeinated items that are available to us, and each has varying levels of caffeine. The table and chart below show a few examples of caffeinated products and the amount of caffeine contained in each of them (Villanova University, 2019).

Whether it’s a cup of tea or coffee to get ready for the day, or just a piece of chocolate for indulgence, we all use caffeine in one way or another. As a matter of fact, here in Canada, the average person consumes up to 210mg of caffeine per day (Foster, 2018). The graph below shows how much caffeine is consumed on average per person on a daily basis in various countries around the world (based on twenty of the top-fifty highest caffeine-consuming countries). 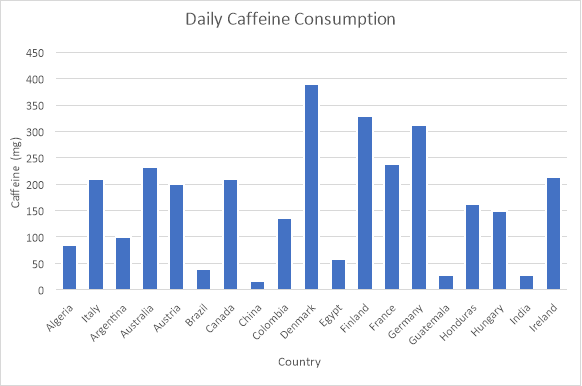 So, how does caffeine work? Well, caffeine enters the brain via the bloodstream and tells the brain to release the neurotransmitters adenosine and dopamine. Adenosine is the neurotransmitter that, when released into the synapse between two neurons, binds to adenosine receptors and makes us feel sleepy. When caffeine enters the nervous system, the neurons mistake it for adenosine and the caffeine binds itself to the adenosine receptors, but caffeine has the opposite effect of adenosine and makes us feel more awake and energized. The rapid fire of the neurons, now energized because of the caffeine, trigger the hormone adrenaline (which is also known as the ‘fight or flight’ hormone, and is basically responsible for keeping us safe) which makes our pupils dilate, raises our heartrate, makes the blood vessels constrict and increases blood pressure (Brian, Bryant, & Cunningham, 2000). Dopamine, on the other hand, is a neurotransmitter that activates the pleasure or reward centers of the brain. Caffeine stimulates the neurons to release dopamine and slows down its rate of reabsorption, which makes us feel very happy (this is comparable to the effects of heroin, though heroin is much stronger and is infinitely more dangerous). When the effects of the caffeine wear off, we can feel that we’ve become depressed or tired because of the decrease in adrenaline and dopamine in the body (Brian, Bryant, & Cunningham, 2000).

There are many harmful effects of caffeine, as there are with many other natural substances. For example, using too much caffeine can lead to an addiction, and the withdrawal symptoms can include days of intense migraines and extreme fatigue. Also, it can cause increased anxiety and insomnia because of caffeine’s stimulating and energizing qualities. For those suffering with high blood pressure or type 2 diabetes, the consumption of caffeine may not be favorable as it can increase both blood pressure and blood sugar levels, making these problems worse. Lastly, according to Linda Massey, emeritus professor of nutrition at Washington State University, excessive caffeine consumption in postmenopausal women can lead to spinal bone loss (Sagon, n.d.).

It is important to note, however, that a lot of the concern around caffeine is about energy drinks in particular, due to their high caffeine-content and an increase in young adults mixing them with alcohol. Energy drinks are defined as non-alcoholic beverages that contain caffeine, taurine and vitamins, as well as other additives. In the European Union, an estimated thirty percent of adults and sixty-eight percent of adolescents consume energy drinks (Bazian, 2014). The negative outcomes of consuming too much energy drinks are caffeine overdose (symptoms can include heart palpitations, nausea and vomiting, high blood pressure, and in some cases, death), type 2 diabetes, obesity, late miscarriages, low birthweight and stillbirths in women who are pregnant, and harmful effects on the cardiovascular and nervous systems in children and adolescents. Researchers believe that when alcohol and energy drinks are mixed, the caffeine reduces the drinker’s drowsiness without diminishing the effects of the alcohol (resulting in “wide awake drunkness”). Therefore, persons have become concerned that the combination of these substances can lead to risky, violent behavior because of the loss of inhibition (Bazian, 2014). However, alcohol does a great job of doing this on its own, without the help of caffeine.

There are currently laws in place that help persons monitor their daily caffeine intake and prevent over-consumption. For instance, in an effort to make consumers more aware about the products they are purchasing, in the European Union, energy drinks that contain more than 150mg/L of caffeine are labeled with ‘High caffeine content. Not recommended for children or pregnant or breastfeeding women.’ (Bazian, 2014) Labels like these are also used on beverages with a high caffeine content in other parts of the world.

Although caffeine can have many adverse effects on the body, it can also be extremely beneficial. For example, studies have shown that those who drink lots of coffee are four to eight times less likely to develop Parkinson’s disease. Also, a 2009 Florida University study showed that forming a habit of drinking three to five cups of caffeinated coffee daily, starting in your forties or fifties, seems to reduce the chances of developing Alzheimer’s and dementia by seventy percent. Harvard’s School of Public Health found that persons who drank two or three cups of coffee a day were forty-five percent less likely to be at risk of suicide, possibly due to the mood-lifting effects of caffeine. Additionally, caffeine consumption can lower the risk of oral and upper-throat cancers, and the risk of stroke in older women (Bazian, 2014).

In conclusion, there are many positive and negative effects that caffeine can have on the body. At the end of the day, every person’s body is different and deals with substances like caffeine in different ways. For example, consuming large quantities of caffeine may be fine for a student in their twenties, but it may be damaging to a pregnant mother and her fetus. It’s always best to know how caffeine works for your body and decide if it is right or not for you; and if you’re not sure, talking to a doctor and researching for more information are always viable options. The most important thing is to be aware of how caffeine can negatively affect you, and try to take as many precautions as possible to prevent the adverse effects that are within your control; for example, drinking less energy drinks or coffee, and getting tested regularly for diabetes and high blood pressure.