LEDs (Light Emitting Diode) are used in almost every machine whether it be a tractor, assembly line or a elevator. They are in these machines because they are energy efficient using less than ninety percent less energy than other light sources and are environment friendly. Four different types of heat sinks will be tested with red LEDs, one of the four will have no heat sink attached to it and will be timed by how long it stays on before it burns out. The LEDs were tested five times on each heat sink. Of the four heat sinks tested: no heat sink, mineral water, aluminum, and copper: no heat sink stayed on the longest.

LEDs are a semiconductor device that emits incoherent monochromatic light. A LED contains a chip of semiconducting impregnated with impurities make a PN junction. The color of the LEDs depends on the amount of bandgap energy in the materials forming the PN junction. The materials used in the PN junction give of this bandgap energy that corresponds to near-infrared, visible or near-ultraviolet light. During the experiment the LED will have a heat sink around it to prevent it from frying faster than it does without one.

Genesis 31:40 says, “This was my situation: The heat consumed me in the daytime and the cold at night, and sleep fled from my eyes.” This verse can be applied to the experiment since diodes give off a lot of heat which make them fry faster but, with heat sinks the diodes fry slower. They fry slower because, the heat sink moves the heat away from the diode so it gets cold. When the verse says, “the heat consumed me”, it represents a diode without a heat sink. The diode with a heat sink is when the cold consumes him at night, since the heat sink is making the diode cold.

The following materials were used in this project:

The steps used to conduct the testing of this project are: 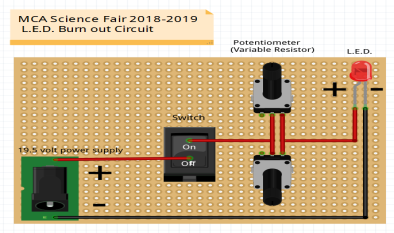 The graph shows how long the LEDs lasted. 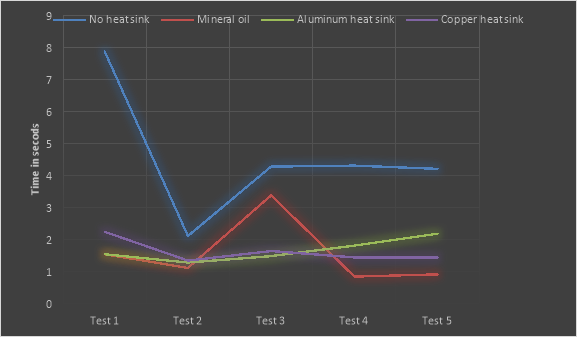 Based on the results, the hypothesis was incorrect. There were certain things that should have been thought of before the experiment that was not