The Six Sigma is methodology for continuous improvement of process quality, operational excellence and minimizes defects by keeping in mind of customer requirements. The six-sigma’s aim is to achieve 1.28 process capability per million opportunities in production, design of product and in administration of products. Adaptation of six sigma’s in industry can lead to unrealistic improvement.

In this paper the author depicts the use of six sigma methodology for eliminating an engine overheating problem in an automotive industry. Its also explores how company can use that methods and move toward six sigma quality level. The DMAIC (Define – Measure – Analyze – Improve – Control) method used by the author to solve an underlying problem for process variation and high rate of defects. After implementing this technique, the author found sand fusion and metal penetration were responsible for jamming the cylinder head.

Hence implementation of method results into a reduction in the jamming problem observed in the cylinder head and increased the process capability from 0.49 to 1.28. This improvement had an significant impact on financial statement saving ($US110000 per annum). 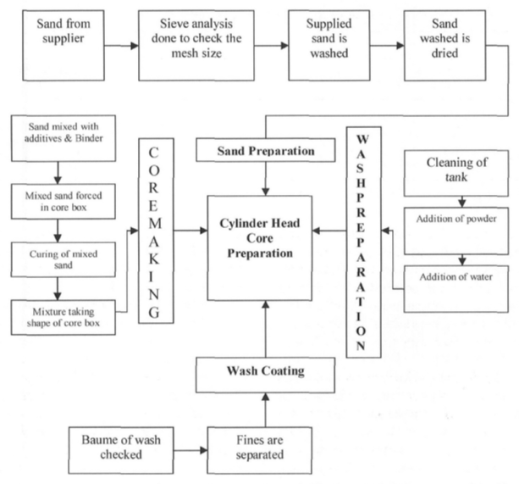 In this case study the main objective was to reduce of water jacket- passage jamming in the cylinder head of an engine. This problem was tackled by six sigma DMAIC methodology. The cylinder head is the cast product used to produced high power that is produced at the bottom surface of the cylinder head and subjects to high heat and vibration. The water jacket passage is a complex passage for water circulation around the engine. The major problem was jamming the water jacket passage leading to customer dissatisfaction. The root cause of this defects has been identified as sand fusion and metal penetration during casting. Sand fusion defects are held by high temperature molten metal fuses with the mould and core. Metal penetration is due to porosity remain in the cores. Thus, it occurs in 13 location as shown in figure 2.

The main focused on the following process to enhance the customer satisfaction and reducing COPQ (cost of poor quality) from 0.194 defects per unit (DPU) to 0.029 DPU.

After that authors, have been used DMAIC tool to reduce defects and improve the quality of the product. Each stage of DMAIC (Define, Measure, Analyse, Improve and Control) is explained below. 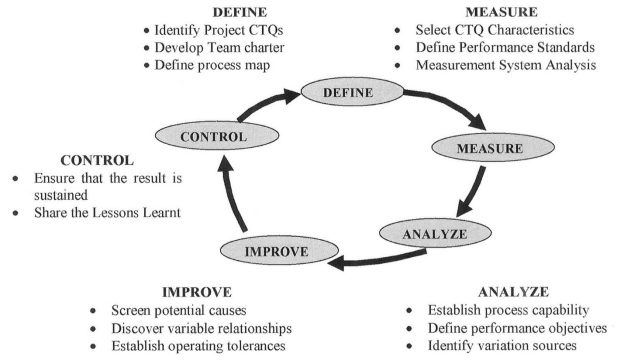 This is the first step of the DMAIC in which project goal, scope, boundaries and customer requirement are defined. The projects team member includes a champion, a black belt, a green belt and two graduate engineer. Furthermore, the team member asks certain question in charting sessions such that what is wrong in the production of the cylinder head casting? where is the problem? How big is the problem? What is the impact of the problem. The team make sure that these points should be been investigated prior the measure phase.

The main goal of this projects was to reduce defects from 0.194 to 0.029 DPU, which immensely decrease in the cost of poor quality. After this the team conducting destructive test on cylinder head and identified root causes and performing brainstorming to an conclusion that the jamming was due to sand fusion and metal penetration. They also conclude that the major roots cause was the porous core.

The main focused on the following process to enhance the customer satisfaction and reducing COPQ (cost of poor quality).

In this phase the teams select one or more products specification, mapping the process, making necessary dimensions and establishing a baseline of the process capability or process performance. This will identify all the value and non- value added steps, key process inputs and outputs. After mapping the process the team member proceed to analysis the causes of defects using cause and effects diagram shown in figure 4. 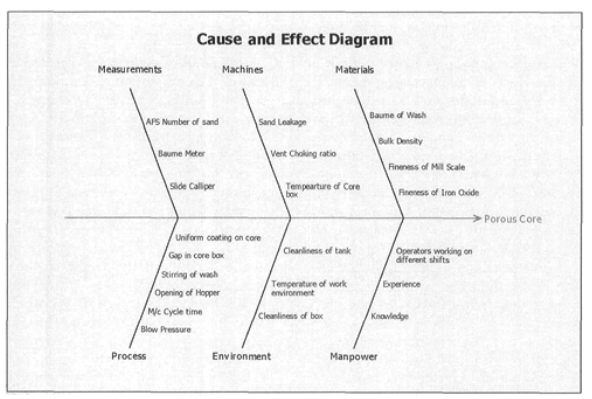 Figure: -4 Cause and effect analysis of the porous core

Its shows that’s the process variables affecting the porous core were sand leakage, blow pressure, the AFS number of the sand, the gap in core box and vent choking. After identifying that contribution of porous core is over 80%, they create cause and effect table 1 showing customer needs with respect to process characteristic that are critical to customer. The next step was to define performance standards according to customer demands.

A data collection plan has been establishing to track the project output and standard setting exercise. To identify the source of variation in the measurement system a gauge repeatability and reproducibility (R&R) study was conducted. Its necessary to redesign the gauge to train operator how to use new gauge and read the gauge instrument and suitable fixtures were used to help the operator for more consistency. This system is used when there is variability less than 10% od the total process variability. This study is performed to check the accuracy of the workers operating the machine.

Thus, the result shows that variation is 6.08% which implies the measurement system acceptable as show in table 2. From the data Cpk value is estimated to 0.49, hence it is clearly indicated that the process performance is poor and improvement needed.

In this phase the first step is to gather data from the process to obtain a better picture of the depth of the porous core under different conditions. Later no the data that are factor affecting are being collected over a period of 36 days from different shits as shown in table 3. This data is further analysed to determine the relationship between process parameters direction of improvement. 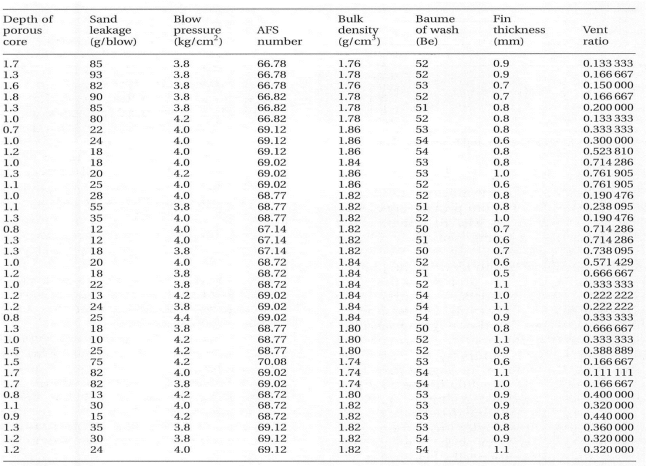 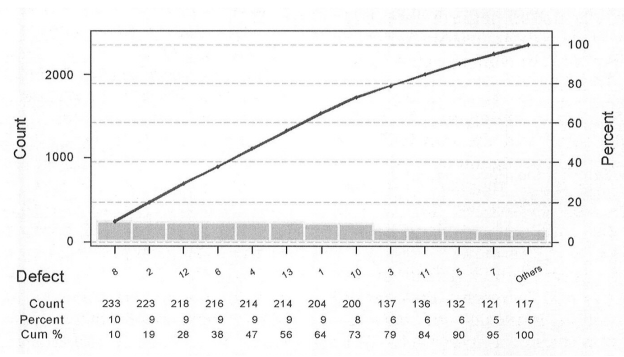 The main aim of the project team to enhance the process capability by reducing variation in the process. A regression analysis is performed to determine the significance of process parameters. According the table 4. The variation P values less than 0.05 to 0.01 that are sand leakage, bulk density, and vent choking ratio are need to be further optimised and controlled. 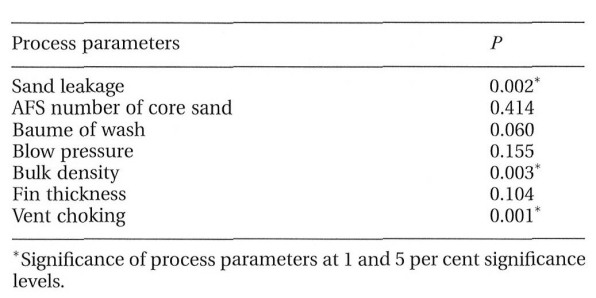 When the door half and the ram half were closely packed due to misalignment of the two halves at that time sand was coming out of the core box, after this the two halves were properly aligned and packing were used to seal any opening ends. The parameter may be varied from 10 to 30g/blow.

This has been considered one of the serious problems posed by the foundry men. The resin used for the core sand blocked the gap of vent by sticking during the curing process. This results in the occurrence of porous core because from the core shooter air cannot escape out of the core box and only 30 vents were blocked out of 52 vents. Thinner was used to clean this vents. This cleaning was increased from once to twice a week during each shift break.

The following steps were taken to control the process.

Proper care was taken of sand so that only sand grain of 65-70 reaches the hopper of shell core machine.

The pressure gauge was checked to maintain blow pressure range of 4-4.5kg/cm2.

According the specification standards (52- 56 Be) the was regularly checked.

Using corrective maintenance, the fine thickness of range 0-0.85 was brought.

Design of experiment (DoE) was conducted using three process and each process was studied at different levels. To have sufficient degree of freedom each trial condition was replicated as shown table 5 the results of the experiments shown average depth of porous core. Hence, the average depth of porous core was 1.25mm. The figure 6, 7 depicts the main effect plot and the interaction plots to relate this it was decided to construct a normal probability plot of effects. Figure shows 6 the main effects were statically significant at 10% level as well as figure 7 suggest light interaction between vent chocking and sand leakage. From figure 6 it seen that the optimum level of the process parameters for minizine all three defect. Thus, the average depth of the porous was computed to be 0. 80mm. Hence, process capability was improved from 0.49 to 1.28. 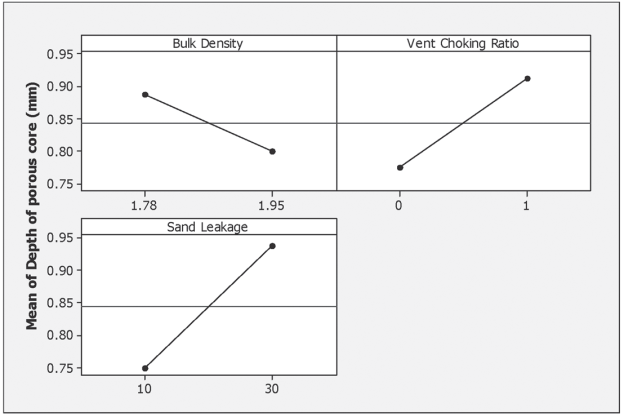 Figure: – 6 Main effect plot for the depth of the porous core 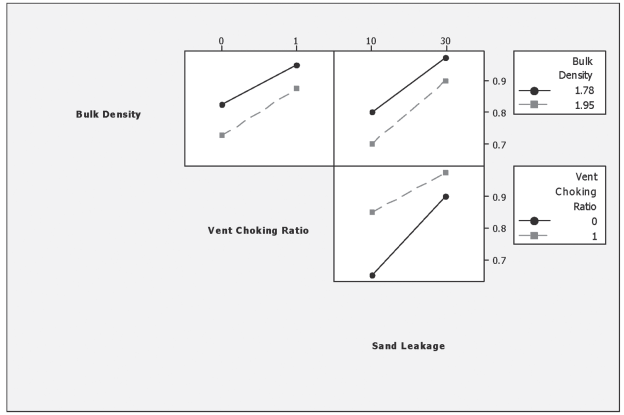 Figure: – 7 Interaction plot showing the interactions among the process parameters

In this phase the extensive programme was conducted for the case study. Process sheets and control charts were made to take preventive action before the process went outside of control limits. A complete data base was prepared and proper monitoring of process help to detect and correct the signals before they result into customer dissatisfaction. run charts for the depth of porous core were drawn before and after improvements. The purpose of the run charts was to analyse variability in the porous core. Figure 8, 9 shows all the point are in the specification and that variability in the porous has been reduced. 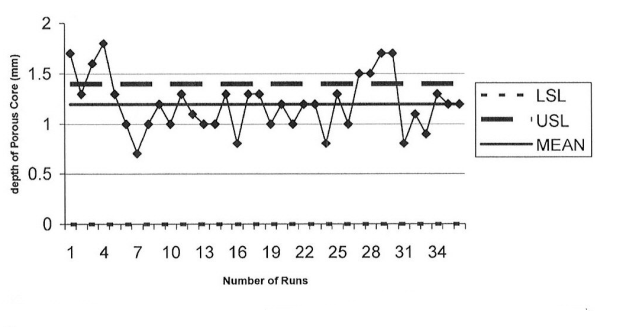 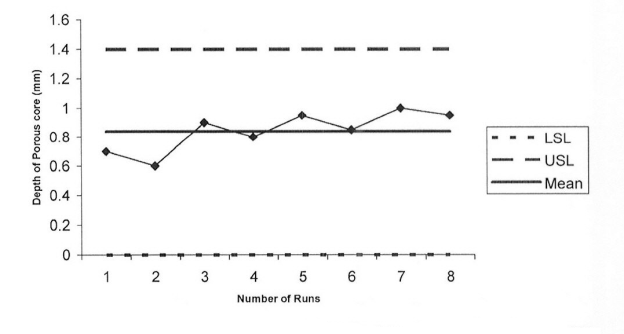 Table 6 Comparison before and after improvement based on key metrics

As shown in table 10 the comparison before and after improvement the depth of porous and various systems has been improved and control by six sigma.

If I were the project leader:

In this case study,

I would like to use all tools. In first step when team is made, it made by only team member so I would like to take one or two members from outside the plants and who are not from this field. By doing this there may be chance to get different ideas from them. Here author did detail study of whole process and found the reasons of problem and best possible solutions.

After collecting data, I would suggest team members to find root causes by doing brain storming and also using Ishikawa Diagram. One the other important tool that authors didn’t use that should be used is VSM (value stream map) through which we can easily find bottleneck of the process.

I would also have used Poka -Yoke (error proofing) tool to easily find error and controlled production of incorrect parts.

Just to apply Six sigma is not sufficient to improve process of product but also maintain the quality is one of the important things in any industry. So if I were the in charge of the project I would suggest to sustain the improvements and motivate team to find more better ways of handling problems.