Project title “Fluid Management System” was completed in my last year of Bachelor Degree program. I completed my Bachelors of Engineering Technologist in Mechatronics from Chisholm Institute, Dandenong, Australia. My first career episode is based on this project experience that I gained and performed for the fulfillment of my work placement. The project was completed in 13 weeks, from July 2015 to October 2015. I was assisted and guided by Prof. Francis Percy, lecturer of Advance PLC.

My project water management system operated on six different modes, operator can switch between different modes with the help of control panels that are mounted on each operating mode switch. It has 2 modes for each operational mode i.e. Automatic and Manual mode. 1 is used to represent Automatic mode and 2 for Manual mode. There are also auto-manual switch selectors. The mode is chosen based on the way user wants to operate. For this purpose, SCADA & PLC programming is done to provide user friendliness.

The pump MDC 118 operates when the tank 1 or 2 is filled from the holding tank whereas MDC 103 operates when filling it between tank 1to tank 2 or vice-versa. The six operational modes are:

It was further required to:

CE 1.5 The chart of organizational structure

The project I have done related to the educational qualifications that I have obtained in my degree course. The relationship between the different modules and project processes is explained below: 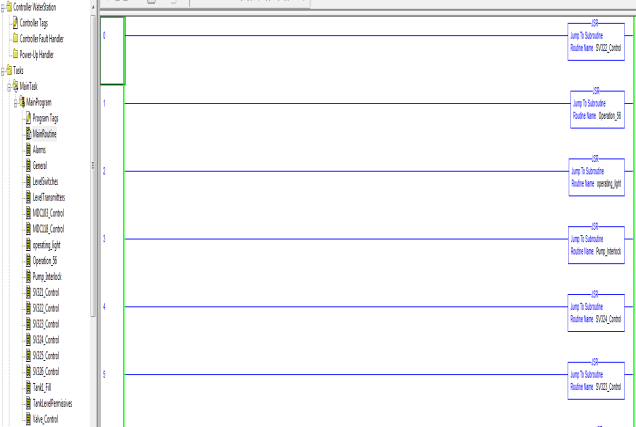 To prevent the occurrence of PLC program interlocking, this technique of energization of one contractor prevents the energization of other until it is in use. This method is called interlocking and I used interlock as a pre-requirement of the task to run the program. Various safety factor and other reasons such as Pump/Motor Faults, pressure requirement of system etc. are considered to run the function of PLC properly. It also makes the programming part easy, for this only writing the code logic of interlocking at one place is required and the same code is used as a pre-requirement of task at another place.

Considering the program logic interlock as Pump fault. It means, that if there is no pump fault, then the PLC will start running normally. Once the PLC starts running, it starts to operate in mode 1. In programming mode one, filling the tank 1 from holding tank through SV 321 valve (energized) and SV 322 valve (de-energized) is done. For the PLC program to be permissive, i.e. each process condition undertaken is called a permissive. For example, consider permissive to be a burner control for large combustion furnaces. To start the burners in a large furnace safely, the control system requests “permission” from several process switches, including high and low fuel pressure, air fan flow check, exhaust stack damper position, access door position, etc. Every process condition that it undergoes is called a permissive. In the below diagram, it is control to fill the tank 1 by tank level permissive, if water level is below 10cm it will start filling tank until to reaches 13cm.

In the system architecture, there is a PLC CPU, DeviceNet Scanner and Flex I/O, RS logic 5000, PLC program and SCADA IFIX program. DeviceNet is a network system that is used in the automation industry to interconnect control devices for data exchange. In the water management system, there is a DeviceNet scanner node. In a typical configuration, the scanner module acts as an interface between DeviceNet devices and the programmable controller. The scanner module communicates with DeviceNet devices over the network to:

I started performing test runs at the final stage, which includes:

After performing the above troubleshooting, the only problem I faced during the implementation of the whole system was that the Emergency stop button wasn’t working. To solve this issue, I took various steps. I started by checking the connections. The first module is 1794-ADN – DeviceNet Gateway module which is used to communicate and transfer data between the DeviceNet Master Module and the Flex IO modules 2 – 4. And the module the next 3 modules in order from 2 to 4 are –

I checked the digital and analog input connection with emergency button with help of my lab supervisor and realized the problem was regarding the analog and digital input only, so I tried to resolve it by doing a research and taking suggestions from supervisors.

I successfully achieved all the objectives of the project within specified time limit and I gained good knowledge from this project as I did intense research about sensors and PLC programing for my project in the form of literature review. This had added many useful engineering techniques to my knowledge and enhanced my problem solving and analytical skills. In addition to that, I also implemented and used my engineering knowledge to make this project successful. I used concepts of various Engineering techniques and PLC programing which I had studied during my course of Bachelor of engineering technologist in Mechatronics. I presented a project thesis and seminar on my work on submission of my project.