The latest phone chargers are wireless

This review will use two major studies amongst others, one by Wan Peng from the Dalhousie University and the other by Mark Estabrook at MediaTek. These have been undertaken to determine the effectiveness of wireless charging and possible applications of it in the mobile industry.

Since the 19th-century wireless charging has been around and had minimal applications until now. Nikola Tesla pioneered and demonstrated magnetic coupling. In basic principles, it is the transmission of electromagnetic fields through the air by creating a current between two circuits, one of which is a transmitter and the other a receiver. Since the early days of its invention to now, it has minimal practical applications, except,  a few patents in electric toothbrush models. Today, there are 5800 patents (Google patent, 2019) for wireless charging technologies. These patents cover several different industries but one industry striking many people are the mobile industry. But are the latest closely coupled phone chargers better than wired charging?

This technique operates on the same principle as the magnetic coupling where an oscillating magnetic field in a primary induces a current in the secondary coil.  However, this design takes advantage of the power transfer that occurs when primary and secondary coils operate at the same resonant frequency. The design requires more complex circuitry to control the resonant frequency to match the primary and secondary coil to achieve high energy transfer. Typical frequency is in the range of 6 MHz.

Microwave radiation propagates through space at the speed of light in the range 300MHz to 300GHz.  The radiant energy can be harnessed and converted to electrical energy for charging devices.  The design comprises of a microwave power transmission system with a AC to-DC conversion, followed by a DC-to-RF conversion through a magnetron at the transmitter side. After propagated through the air, the microwaves captured by the receiver rectenna are rectified into electricity again.  Microwave energy can be radiated isotropically or towards some direction through beamforming. Recent development has also brought commercial products into the market.

Wireless power transfer has several methods and applications, the most common method in the mobile industry is inductive charging and in particular, closely coupled inductive charging. This technology originates from the 1950’s where fundamental analysis of resonance coupling over space and time was widespread.

Figure 1 -  A diagram that represents inductive charging between the transmitting coil and the receiving coil. Diagram by Richtech technology.

As seen in figure 1, inductive charging involves a transmitting coil which is then connected to a supply power which in the case of Qi charging it would be a wall socket of 240 volts AC, furthermore, the receiving coil in the phone charges the battery. The receiving side controls the processing and flow of power via communication with the transmitter. Figure 2 – Diagram representing the application of the electromagnetic laws to produce wireless charging. Diagram by Qualcomm.

Through the use of electromagnetic waves, a field is created and power transmission is then possible over a short distance. A current first starts in the transmitter coil where a magnetic field is induced between the two coils. This magnetic field then induces a current in the receiving coil which charges the battery of the mobile device. 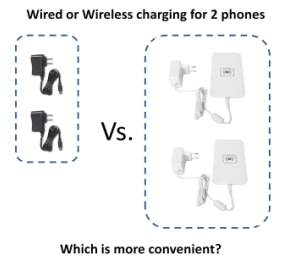 A study directed by Colorado State University (CSU) and commissioned by the Wireless Power Consortium (WPC), who govern the Qi standard for wireless power. This study depicted that when Qi’s inductive charging is competing against Rezence, it far succeeds the efficiency of Rezence in terms of energy input to energy output. The high-frequency of the resonant systems compare to the low-frequency inductive systems varying energy loss due to different factors. Rezence systems operate at high frequencies thus resulting in significant energy loss through transmission (WPC, 2015). This shows that closely coupled charging is superior to the application of mobile devices. But when comparing closely coupled to wired charging efficiency it is a different story. Figure 5 – Equations for the efficiency of inductive charging systems. Equations by CSU.

CSU researchers and many other scholars agree that equation 16 accurately describes the efficiency of inductive charging. Equation 16 was derived from several other fundamental equations such as Maxwell’s equations. Maxwell’s equations were condensed and derived from Ampere’s law, Lenz’s law, Faraday’s law and Gauss’s laws. Which the first two of the four equations are Guass’s law for static magnetic and electric fields. The third one is based on Faradays equation which states a changing magnetic field induces an electric. The final equation is based on Ampere’s law which states that a changing electric field induces a magnetic field. Through the application of these fundamental laws of electromagnetism equation, 16 can be derived and used in the comparison of wireless vs wired charging. The Wireless Power Consortium claims a maximum 85% efficiency on the Qi wireless charging with 5-20 V and up to 10.8 W, at which the loss would thus be 1.62 W. If you assume the highest voltage (20 V), to minimize current losses and minimize resistive losses.

Hypothetically if you were to get the same efficiency of 85% in a wired charger.

The resistance would be using R = P/I2

The resistivity of a 0.5 mm diameter copper wire is 0.08546 ohms/meter which is the standard in wired charging.

Thus you would need a 12-meter charger to get the same charging efficiency of a Qi with peak/optimal factors and assumptions. Proving that wired charging is more practical and substantially more efficient. 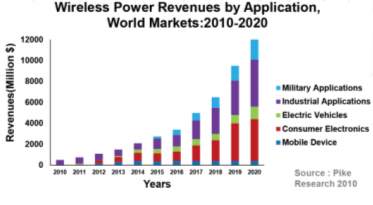 Figure 7 – The graph depicts the demand/applications of wireless charging in other industries.

Facing the evidence closing coupled charging does not match the competition of wired charging in that industry. Not all hope should be lost for wireless charging. The method and concept of wireless charging allow for a plethora of applications in several fields other than the phone industry. Evidence has already begun to depict wireless charging technology having a lot more of an impact in other industries, like industrial applications. In the vehicle industry, there has been a lot of research into resonance charging pads in the ground that charge cars and buses while parked. Until the efficiency of closely coupled charging improves it will not compare to wired charging.

A section of the evidence gathered for Qi technology cam from WPC. WPC developed the Qi standard which may suggest some bias may be present. Despite the suggested bias, its evidence was similar when compared to other non-bias sources. The first of the two major sources was by Wan Peng this source is reliable as it was published through the Dalhousie University which is a respected institution. The second of the sources was Mediatek. Mediatek is a producer of designs and manufacturer in the wireless charging industry. “It does not appear that Mediatek is negligent, dishonest or biased, but it is essential that an outside authority confirm the information as true at some point in the future. Understandably, evidence that suggests that wired charging is better is likely to be commercially sensitive, making it publicly available may threaten their business opportunities.”

Evaluation of the claim

The research question, “Are the latest closely coupled phone chargers better than wired charging?” was addressed by gathering evidence. The evidence suggests that wired charging with the current technology is better in several aspects compared to Qi charging. However, as it is difficult to apply Maxwell’s equations and electromagnetic concepts, much of the investigation was dependent on online sources. The findings of this investigation, imply that all three methods of wireless charging are promising but the technology is not there yet, thus limiting its usability.

In order to address the limitations of the evidence identified previously, some improvements could be made. The first improvement would be to research the other applications of closely coupled technology in other industries. Further data is required to establish if closely coupled charging is obsolete in the mobile industry as technology is constantly changing. The results of this further extension may suggest a more efficient wireless charger that contends wired charging. Thus further research is required in a possible solution for wireless charging moreover what would this mean if wireless charging could be implamented.