Collier’s Conflict Trap is in essence the idea that civil war begets more civil war. Collier is no armchair academic. His work on the link between resource predation and civil war through the World Bank played an important role in spurring the UN resolution to regulate ‘blood diamonds.’ (Klare, 2001) This essay will explore Collier’s conception of the Trap, particularly examining how he frames it through the lens of Greed and Grievance. It will then proceed to place the Trap within Collier’s oeuvre, and critically analyse its explanatory power with regard to civil war, comparing how Collier’s conception fares against seminal civil war theorists. We find that while there are gaps in his explanation of civil war, the Trap still holds up, and can be expanded upon through synthesis with competing theories. The second part of the essay deals with possible methods to overcome the Trap. Both international intervention and good local governance are found to be possible solutions, but local governance emerges as the more effective approach.

In formal terms, the conflict trap is when the “long-term risk of conflict in a country or region increases considerably after the first conflict onset.” (Hegre 2012) For the Conflict Trap to hold weight, its fundamental premise must be true: that conflict begets conflict. There is substantial evidence that this is the case. It is estimated that the probability of re-incidence of civil war within 12 years is approximately 40%. (Collier, Hoeffler and Soderbom 2008). Collier’s findings are corroborated by other studies. (Hegre et al., 2001; Walter, 2004; Quinn, Mason and Gurses, 2007). But the Trap articulates more than correlation; it demands causality. This causality is substantiated through Collier’s explanation for the causes of civil war.

Though he proposes a range of causes of civil war, the pertinent causes to the Trap are:

War causes economic regression (Collier 1999), and low income (Hegre and Sambanis, 2006) and low growth (Collier and Hoeffler 2004) cause civil war. Collier’s trap is well substantiated in this regard. ‘Rebellion-Specific’ capital refers to resources useful to rebellion. This includes weapons and ammunition, as well as trained military age veterans and natural resources. These are created during conflict and remain in a country even after its end. (Collier and Hoeffler 2004, 569) Civil war damages the organizational capital of the state, as well as erodes faith in democratic institutions. 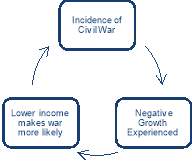 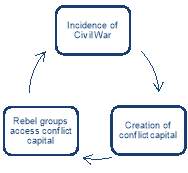 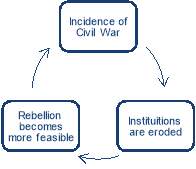 Fig 1. The Mechanics of the Conflict Trap

Let us place Collier’s Trap within his larger body of work. His extensive work on civil war and development spans roughly 10 years and has evolved considerably.[1] The Conflict Trap exists within Collier’s framework of general causes of civil war. He posits that the outbreak of war is caused by a combination of feasibility and motivation. Examining the latter, he frames motivations for non-state actors within a dichotomy of “Greed and Grievance.” (Collier and Hoeffler 2004) While neither is formally defined, they can be summarized as, respectively, an opportunistic profit-oriented motive, and a response to perceived injustice. Some examples Collier provides as Grievance are “ethnic hatred, political repression, political exclusion and economic inequality.” (Collier 2001) Collier is sceptical of the explanatory power of (his self-ideated) Grievance. In his analysis of the 2000 Fijian coup, he quips that “Fiji for the Fijians” was a less convincing rallying cry than “give the mahogany contract to the Americans”. (Collier 2007) More pointedly, he concludes that grievances of actors are “substantially disconnected” from the larger grievances of inequality, political rights, and ethnic rights. (Collier and Hoeffler 2004) Is his dismissal of grievance valid?

The dichotomy between Greed and Grievance is ultimately a meaningless one. Consider the correlation between GDP per capita and the incidence of war, which Collier finds (2004). A rebel might take up arms because she has a legitimate grievance with poor economic conditions, or because she simply can make more money fighting than farming. Collier’s quantitative approach cannot make a distinction between the two, and hence cannot meaningfully refute claims to grievance. In addition, the line between what constitutes greed and grievance is not meaningfully drawn. Suppose a strong democratic government is absent from a country. Would this indicate a grievance, because rebels want a better government, or greed, because this provides an opportunity for an easy takeover? A more productive approach might be to examine how grievances are socially constructed. Grievances do not exist in a vacuum. They must first be identified and articulated. In other words, they must be socialized. The existence of an “identity-based collective action frame” has been found to be an important factor in the genesis of conflict. (Aspinall, 2007) Aspinall’s work on Aceh, Indonesia demonstrates that grievances are socially constructed.

However, whether Collier’s explanation for how material conditions affect the probability of incidence of civil war is effective, however, does not detract from the claim that they do, and hence do not weaken the veracity of the conflict trap. The conflict trap merely outlines the causal link between civil wars, the material conditions they create, and further war. The Conflict Trap can be synthesized with other theories and extended through an expansion of the definition of ‘rebellion-specific capital’. Viewing ‘identity capital’ (Aspinall 2007) as a form of rebellion-specific capital allows the conflict trap to work within a wider range of frameworks. Additionally, examining how the social processes of war lead to ripe conditions for war could be fruitful. Wood (2004) explored how the social processes of war can lead to further violence. This can be understood to also be a conflict-trap-like process, expanding our understanding of the trap.

Is the Conflict trap inevitable? There are two main approaches to overcome it: external intervention and fostering domestic good government. External intervention is an effective approach to breaking the Trap’s vicious cycle. By removing the factors that contribute to war (which were in turn created by war), intervention can prevent further war from breaking out. A much-praised example of international intervention is the inception of the Kimberley Process, a UN-initiated certification scheme to verify diamonds as conflict-free. Collier called it “the most important example” of international action.[2] (2003) The Process breaks the conflict trap by removing rebels’ access to capital (which they gained through war). The removal of a key resource “substantially altered” the conflict dynamic. (Klare 2000) Soon after the ratification of the Process in 2000, two rebel groups in Sierra Leone and Angola which relied on diamonds were defeated.

External intervention, however, has its flaws. Intervention is inherently tied to the interests of the intervening state(s), and thus not a reliable or dependable long-term solution to the conflict trap. Even when the preconditions for civil war were glaringly evident, the UN was devoid of power to intervene in Rwanda, in 1993. (Barnett and Finnemore 2004) The UN was bound to withdraw its armed peacekeepers at the outbreak of war. The resultant conflict and genocide are considered a major failure of the UN. (Atwood, 2014) External intervention is inherently limited because international organizations must strike a balance between intervention and upholding sovereignty.

Another alternative is good local governance. Specific policies have been found to increase or decrease the risk of conflict re-occurrence. Collier finds that an increase in military spending increases the risk of conflict re-occurrence while a focus on inclusive social policies reduces the risk. (2003) In addition, a focus on good economic policy can restore growth and hence break the conflict trap. This is especially pertinent as growth is “more sensitive to policy during the first decade post-conflict.” (Collier 2003) But how does a government just ‘become good’? Even if they were to follow Collier’s guidelines of implementing inclusive social policy, a country does not become inclusive by wishing it so. Organizations like the UNDP present a good solution. UNDP assists local governments develop productive policies and can thus break the conflict trap. By allowing the local governments to ultimately execute these policies, advisors circumvent the issue of sovereignty.

We have examined Collier’s conflict trap, contextualized its place within his academic canon, and analysed its explanatory power alongside competing theories. The conflict trap accurately describes reality. While gaps were found in its conception, synthesis with competing theories allows it to describe reality with greater nuance. To overcome the trap, both international intervention and good local governance are found to be effective, though the former has significant limitations. Good local governance coupled with international expertise emerges as the best way forward.