In this report I will discuss the recent United States trade agreements and sanctions imposed to other countries, such as China, North Korea and Russia. ‘Governments impose sanctions with the express purpose of changing the behaviour and policy of another government or state (Caleb Silver, 2018). I will outline two major type of sanctions (one from an economic reason and the other from the national security reason) imposed by United States to other countries and the impact of the sanctions on the countries economy.

2.1 Us trade war against China

China and United States are currently locked in an ongoing trade war as each country continues to dispute tariffs placed on goods traded between them. Recording to several American sources on July 2018 United States president Donald Trump levy tariffs on 34 Chinese goods and China responded with the similar sized tariffs on US products. Trump administration defended themselves saying that the tariffs were necessary to protect US national security and intellectual propriety of American businesses. The US president has accused China for long time abuse of the broken international system and unfair practice and said that is going to stop them (politico staff, 2016).

In Death by China book written by Peter Kent Navarro, an American economist who is currently serves as assistant to president, Director of Trade and Industrial Policy, he argues that China violates fair trade. He accused China for illegal exports subsidies and currency manipulation effectively flooding US market and making virtually impossible for American companies to compete. China experts dismiss Navarro Theory and said that they are not preventing America from being great, they contribute to American economy. While US try to enforce rules and regulation for China`s unfair subsidy behaviour, in them defence China said that subsidies are not uncommon in America either, agriculture is heavily subsided by the government.

According to Chinese sources, China is not dependent on US imports, opposite America is an import led economy with a weak industrial and manufacturing base, heavily depend on import from China. 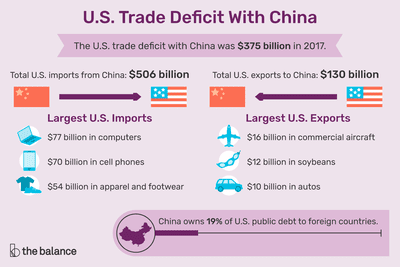 Fig1. US Trade Deficit with China

As we can see in Fig. 1 both countries economy will suffer if they do not end to this war, and not just. If the United States implemented trade protectionism, U.S. consumers would have to pay high prices for their “Made in America” goods. It’s unlikely that the trade deficit will change. Most people would rather pay as little as possible for computers, electronics, and clothing, even if it means other Americans lose their jobs (Kimberly Amadeo, 2018).

The question is what to do to end this war. The first step is for each side the US and China to understand thoroughly the other side`s arguments and ways to thinking.

2.2 US sanctions against Korea and Russia

The US Department of Treasury has sanctioned North Korea since the 1950s. During 1980s North Korea has been sanctioned further tightened with international bombings against South Korea by a North Korea agent. Additional sanctions were imposed after North Korea performed nuclear tests in 2006, 2009, 2013. 2016, and 2017. In 2017 US president expanded sanctions on shipping, banking, ports and manufacturing, and advised China`s central bank to shut down business with North Korea (Julia Borger, 2017). Was unclear if any amount of financial or economic pain would relinquish North Korea`s nuclear weapons and missiles

US treasury had the power to sanction anybody involved in wide variety of North Korea industries, port, trades and banking. US has accused North Korea that had abused the international financial system to facilitate funding for its nuclear weapons and missile program.

Despite of economically and diplomatically isolation they had continued to develop its ballistic missile program in hidden bases. In 2018 White House officials acknowledge there is been not progress on denuclearization, so there is going to be another summit in the next year. North Korea has no conducted a nuclear test since September 2017, but American experts think that country continue to produce fissile materials (Zachary Cohen, 2017).

US Government together with UK investigation has determined that the Russian Government has used chemical and biological weapons in violation of international law. The determination was made under the Chemical and Biological Weapons Control and Warfare Elimination Act of 1991 after Russian government’s use the “Novichok” nerve agent in an attempt to assassinate UK citizen, also been a double agent to Russia and UK, Sergei Skipal and his daughter (Heather Nauert, 2018). Russian President Vladimir Putin has labelled the latest US sanctions imposed by Washington as “counterproductive and senseless” (Mindok Clark, 2018).

The US administration also sanctioned two Russian shipping companies that it suspects have traded with North Korea in spite of restrictions on doing so. Russia has been accused by the US that is impeding them ability to achieve complete denuclearization in North Korea. Russia is focussing on developing railways with North Korea and wants the US and UN Security Council to relief the sanction against North Korea. They want to connect its Siberian railway into North Korea and reach the port in South Korea. Not actions been taken yet, US said is not time to relief the pressure on North Korea not matter how lucrative is for Russia.

Since the early 1990s, the US, Europe and other developed economies have employed sanctions on other nations, seeking to assert their influence on the global stage without resorting to military interventions.

Sanctions are employed by the United States to discouraged the proliferation of weapons of mass destruction and ballistic missile, bolster human rights, end terrorism, promote market access and protect environmental.

Despite their widespread use on the international stage, economic sanctions are largely ineffective in achieving their objectives. Data has shown that the longer sanctions are in place, the less likely they are to be effective, as the targeted state tends to adapt to its new economic circumstances instead of changing its behaviour.