The plan to request an extension of the tariffs was discussed at a meeting organized by the China Sugar Association on Thursday.

Beijing’s trade measures on sugar imports, set to expire on May 21, 2020, “have played an effective role in safeguarding the interest of the domestic industry, and promoting healthy and stable development of the sector,” said the draft document that was dated Sept. 5.

China’s domestic sugar sector has struggled to compete with foreign rivals due to higher production costs. Chinese white sugar prices CSRc1 also plunged in 2018, amid a global supply surplus, pushing many producers into the red.

The Guangxi Sugar Association, in China’s top producing region for the sweetener, will submit the application for the extension of the tariffs on behalf of the entire domestic sugar industry, according to the document.

A source familiar with the matter confirmed that the industry group is consulting lawyers and experts, and drafting the application to be submitted to the government.

It is not clear when the Guangxi association will submit the plan or what Beijing’s response will be, as other major sugar exporters continue to pressure China to drop the trade measure to curb imports.

“The safeguard measures are a very complicated issue. Application is still only an plan. It is not easy to extend (the measures),” said one of the sources who was briefed on the plan.

Separately, China Sugar Association will also look into the possibility of an anti-dumping and anti-subsidy investigation into imported sugar products, according to a second draft document discussed at the Thursday meeting.

Some sugar exporting countries and regions have exported sugar products at below cost prices, or with subsidies, which has damaged China’s domestic sugar industry, the document said.

The draft does not outline proposed tariff rates if the safeguard measures are extended.

China in May 2017 hit major exporting nations with hefty tariffs on sugar shipments after years of lobbying by domestic mills. Beijing started to levy extra tariffs on out-of-quota sugar imports from all origins last August.

China’s sugar industry plans to request the Chinese government to extend the 2017 hefty tariffs on sugar imports. Due to a global supply surplus in 2018, Chinese white sugar prices decreased drastically, which has negatively impacted many domestic producers. A tariff is defined as an import duty, a tax levied per unit on the price of imported goods and are considered the most common form of trade restriction. Tariffs are used to protect a domestic industry from competition (protective tariff) or to raise revenue for the government (a revenue tariff). 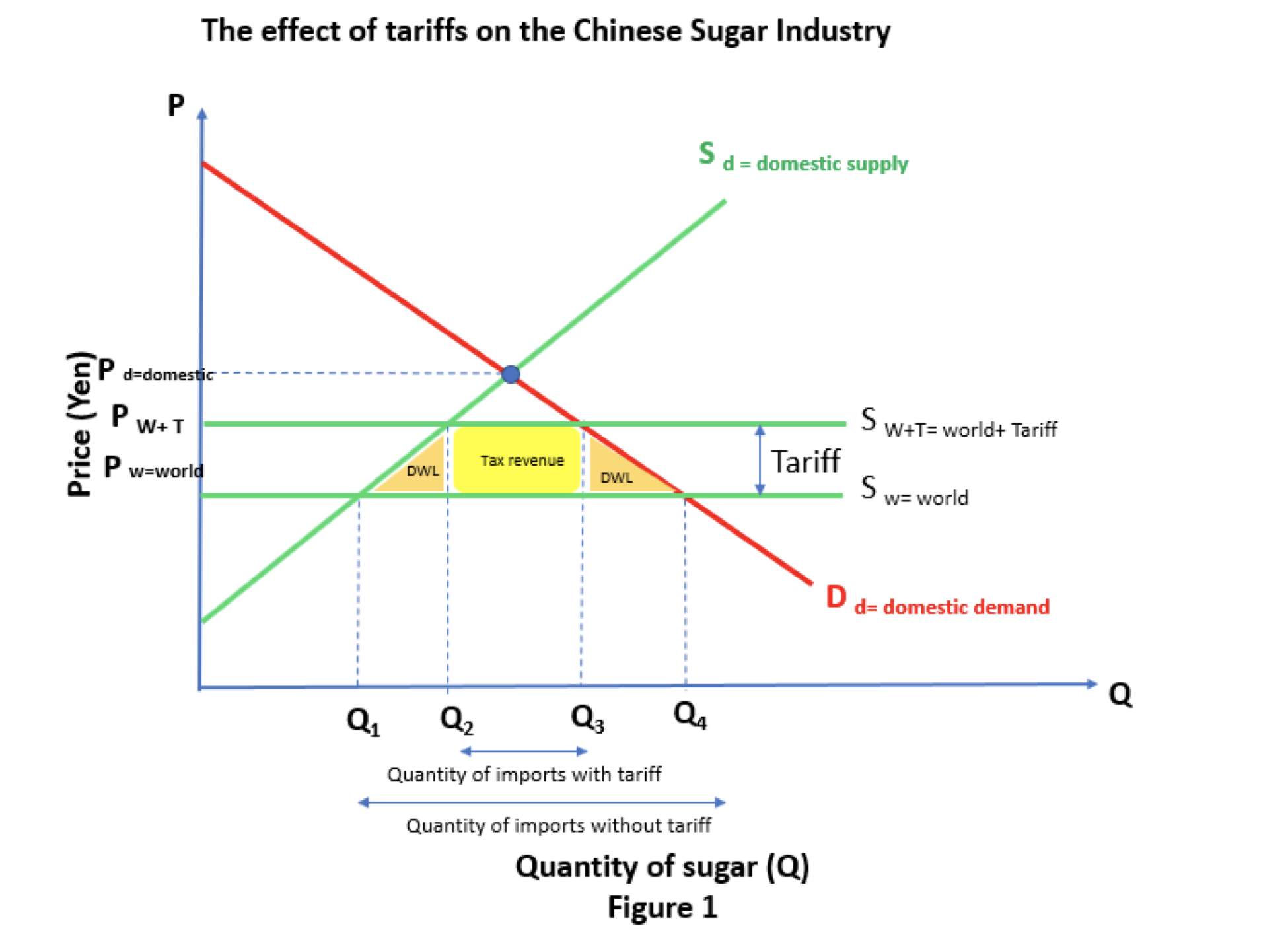 Figure 1, shows that under free trade, China accepts the world price Pw, where it produces quantity Q1 , demands Q4 ,and imports Q4 - Q1. With imposed tariffs from 2017, the price of imported goods rises to P w +T, causing the domestic price of goods to rise above the world price by the amount of the tariff, to P w +T.

At P w +T, the domestic quantity supplied increases from Q1 to Q2, domestic quantity demanded falls from Q4 to Q3, and the quantity of imports falls to Q3 - Q2. The impact of the tariffs is negative on both the Chinese consumers and foreign producers. However, it is beneficial for domestic producers, as they receive a higher price, P w +T, and sell a larger quantity Q2(rather than Q1). The government also gains tariff revenues as per the yellow box. However, the decrease in consumption and the shift of production away from more efficient foreign producers, to more inefficient domestic producers indicate that there is an increase in misallocation of resources both domestically and globally (represented by the orange Deadweight loss triangles in figure 1). Figure 2 shows that some countries, are producing more than their domestic consumption due to subsidies. Before the subsidy, domestic production is at Q1, domestic consumption is at Q2, and import are Q2 – Q1. The subsidy shifts the domestic supply curve from Sd to S ds. Hence, the new quantity of domestic production is Q3 which is greater than Q2. As the excess capacity produced, Q3 – Q2 cannot be absorbed by the local markets, it is dumped on international markets by the producers, i.e. sold at a price which is below the cost of production. The effect of dumping has dire consequences on the Chinese sugar industry, as local producers cannot  compete with these low prices. Dumping is considered ‘unfair’ by the World Trade Organization (WTO). This  organization promotes fair trade competition as one of its main functions.

Hence, it is highly recommended that China involves the WTO to investigate these low prices and resolve this issue, by imposing an anti-dumping tariffs in order to limit imports of the subsidized, or dumped goods.

Moreover, it is recommended that the sugar industry evaluates subsidies from the government. Subsidies in the case of trade protection are the payments per unit of sugar output granted by the government to domestic firms that compete with imports. Figure 3 shows that under free trade, China produces Q1 of sugar, the quantity demanded is Q2. The excess demand is Q2 - Q1 will be catered to by imports. By granting subsidies (a determinant of supply) to the local producers, the domestic supply Sd will shift to S ds. The sugar domestic production moves from Q1 to Q3 and continue to sell at Pw. This will reduce the imports from Q2 - Q1 to Q2 – Q3, Thus, under this scenario, the consumption of sugar will remain unchanged at Q2, at price Pw.  Consumers will purchase more local sugar, which is beneficial  for the local economy in the short term. Therefore, in the long term, it will ensure a steady circular flow of economic activity. Hence, the domestic producers will sell locally at Pw (per unit), but they will receive Ps (per unit) as the government will subsidize their cost of production per unit. The production will increase from Q1 to Q3, which will benefit the producers in the short term. For the long term this shift of production from efficient to inefficient producers will affect negatively economies due to the misallocation of resources. Moreover, the downside of these subsidies in the short term, will have a negative effect on the government budget as the amount of the subsidy (Ps – Pw) multiplied by Q3 must be paid by tax revenues that could have been used in merit goods. Therefore, in the long term will allow an increase in domestic employment as the quantity produced expands from Q1 to Q3 keeping the consumption unaffected which is beneficial for the local economy.