The increase in road traffic that takes place especially since early 1990s has a great impact on congestion, delays and environment problems in both developed and developing countries. The private cars owners are a major factor playing in the severe congestion especially in the developed countries where the purchasing power in the middle-class incomes increased, the prices fell and the supply of the vehicles increased. (Alberto Bull,2003) This essay is going to resume negative effects of pollution and congestion on an economic level, ways to reduce the congestion and how charging diesel vehicles to enter Manchester will tackle the problem of busy traffic roads, reduces the pollution and has a positive effect on economy.

Greater Manchester has reported a higher number of deaths because of air pollution than London, according to a study by King’s College London for IPPR North. The study reveals that in 2011 the mortality burden in Greater Manchester was estimated to be approximately 1,459 attributable deaths at typical ages due to the PM2.5 emissions. Besides the significant number of deaths in the population, another negative factor of pollution is the economic costs of £1 billion per year. The benefits of air pollution reduction which is mainly caused by vehicles fuel that emits NO2 and PM2.5 with the same level of concentration in 2011, has been estimated to be up to £0.5 billion on average/year at 2014 prices.( https://www.ippr.org/files/2018-06/greatermanchester-hia-060618-final.pdf) The figure below shows different types of vehicles and their emissions on NOx (nitrogen oxides) and PM10(coarse particles), based on national-average fleet compositions for 2015. It is clear that the main pollutant are the emissions of diesel cars if compared to other types of fuel. In the case of NOx emissions, diesel cars contributes with 45.8% of the cause of pollution which is a significant percentage if compared, for example with petrol vehicles which is 5.8% or buses and coaches (14%). The percentage of diesel cars in emission of coarse particles has also the greater proportion among other vehicles fuels (29.2%), however it is not a dramatic difference from the petrol cars (23.9%).(Manchester air quality) 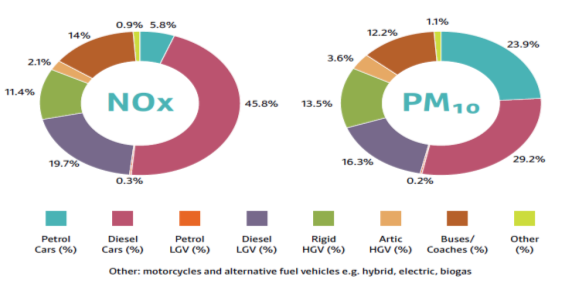 Figure 4: Proportions of NOx and PM10 Emissions from Road Sources

Manchester was ranked the second most congested city in the UK in 2016, according to INRIX 2016 Traffic Scorecard. Traffic congestion statistics for Manchester based on TomTom’s historical database for 2016 shows that drivers spent 44 minutes more per day in peak time, which constitute 169 hours per year.( https://www.tomtom.com/en_gb/trafficindex/city/manchester). Manchester Evening News reports that according to the TomTom’s study the productivity in Manchester decreased by more than £11 million in 2016. The estimate costs of congestion in Greater Manchester’s economy is 1.3 billion a year. (https://www.tfgm.com/news/congestion-conversation-closes). Because of the severe congestion, people refuse jobs located in the city center. Tony Sloan, aged 60, who runs a legal recruitment firm based in Manchester, in a reportage for Manchester Evening News, declares that up to five clients per week refuse jobs paying £50,000 because of the commute to the city center. 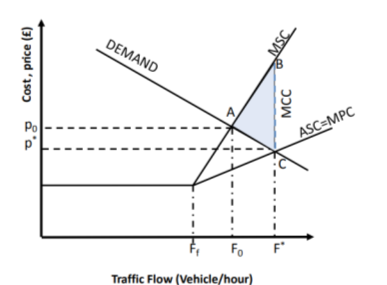 The area under the demand curve is the total social benefits, while the area under the MPC curve is the social costs. The optimum point is at (p*, F*) and the triangle ABC represents the social cost of uncontrolled use of the road network. Thus, every driver will pay the marginal external cost of congestion and they are forced to pay the marginal price cost (MPC) which is produced by introducing a tax of congestion cost (MCC) to the ASC. This results in a price equilibrium and the number of vehicles will fall below MSC because of the higher cost of travelling caused by their benefit of road usage (MPB). (https://www.kent.ac.uk/economics/research/seminars/internal/KengEstimationofSD.pdf)

According to the Institute for Public Policy Research North, a congestion charge should be introduced to reduce the congestion and the air pollution. Charging diesel vehicles to enter Manchester will increase the general cost of travel, thus it is expected to reduce the road use. This additional cost will therefore shift the ASC and MSC lines upwards in Figure 2, so the intersection of the demand line with the average cost will result in reduced number of trips. If additional external costs occur (road damage or pollution), the true marginal social cost could be even higher than the marginal cost which will lead to an even lower traffic volume. In addition, introducing a road tax would raise revenue. (https://www.ifs.org.uk/bns/bn31.pdf)

The London Congestion scheme was introduced in February 2003 having as primary goals reduction of congestion, air quality and journey time reliability improvements and to create a long-term fund in order to improve the public transport. The initial investment was £161.7 million and the annual operating cost £130 million. The results of this movement were proven to be successful such that the congestion has been reduced, the air quality has been improved and the long-term funding source was creating. In the first 10 years in which the scheme was operating the gross revenue achieved about $2.6 billion up to the end of year 2013. About 46% of the net revenue has been invested in public transport, road and bridge improvement and schemes for walking and cycling from 2003 to 2013.( http://nyc.streetsblog.org/wp-content/uploads/2018/01/TSTC_A_Way_Forward_CPreport_1.4.18_medium.pdf)

Studies show that the London Congestion scheme has reduced the CO2 emissions by 16% and increased the region economy, producing surplus revenue of £122m in 2005-2006.( https://www.c40.org/case_studies/londons-congestion-charge-cuts-co2-emissions-by-16)

The congestion charge had impact on businesses because of the supply and demand side effects. The positive supply side effects are the increase in productivity and the cost saving due to less delays, whereas the negative ones are relating to the increase in the costs and charges from the suppliers and merchandise transport. The demand side effects presents the prevention of the cost by consumers and consumers expenditures away from the charging zone. Those effects combined can have positive impacts for firms in some sectors but also negative for others. (Mahendra, A 2010)

Singapore’s Electronic Road Pricing (ERP) was launched in 1998, having as primary goals to reduce the congestion and to increase the reliability of travel time. The initial investment was about US$110 million and the annual operating cost roughly US$18.5 million with a net annual revenue of us$100 million. ERP successfully reduced the inner city traffic by 24%. Moreover, the public transit improved which leaded to an increase of the public transport use by 15%. The emissions of CO2 and other greenhouse gas emissions fell by 10-15% in the inner city and the revenue produced by the charge of congestion was used to improve the street safety and public transportation. For instance, Singapore developed the rail and bus system by building intermodal transportation centers.( http://nyc.streetsblog.org/wp-content/uploads/2018/01/TSTC_A_Way_Forward_CPreport_1.4.18_medium.pdf)

On this basis, we conclude that in order to tackle the congestion and air pollution problem, a diesel tax for the vehicles entering Manchester should be introduced. The present findings confirm that road pricing will reduce the traffic volume because of the higher cost of travel and will support not only the economic growth but also the improvements for the public transportation.