The report explores the broader Operations department teamwork aspects for the State Bank of India (SBIUK). The problems have been identified using the following tools of analysis: culture, motivation, power and identity. The firm leading loses of employee productivity and attrition ratio. In the SBIUK nominal staffs stayed more than two years due to personal circumstance. The total headcount in the department, including two Assistant Managers and eight members headed by Deputy Manager. The operations department turnover ratios were high due to the lack of benefit schemes, job satisfaction, motivation and culture. There has been a lack of cultural and collaborative integration between Assistant Manager and team members of the operations department.

Daily, she complained about her team members to another department which reflected her incapability to be a good leader. The assistant manager tended to Procrastinate her work resulting in a load of incomplete work. Not only this, when she was held accountable for the same, the assistant manager dared to blame other individuals in the organisation. In specific cases in which a complaint raised regarding non-recipient of payment, she never accepted her mistake or the fact that an error could have occurred. As employees regularly work hard to bring positive and development, harsh and uncooperative observations discourage them. Effects are added worse by the deficiency of concern displayed by the manager, and her point was right, and nobody questions her.

I observed the following findings:

(a)   The Deputy Manager was on sick leave for one day and the assistant manager was second in command. That day, the team processed double payment of £860,000 which sent to Dubai based, the customer account debited twice for the same payment.

After a couple of days, the reconciliation team sent an outstanding list to operations and she was identified and not reported to deputy manager and she went holiday silently. Then- Chief Financial Officer called operations department Deputy Manager to ask the status of this incident. He was unaware of the incident because it was not reported to him from assistant manager. After that, Deputy Manager was contacted the beneficiary bank to return the funds to us and then reported to the Risk Department for the near-miss incident. The Management instructed to perform the independent investigation for this incident and she mentioned to the investigation officer this payment was processed based on Deputy Manager’s written approval. However, that day Deputy Manager was on sick leave and she was lying to an officer and unable to produce any written approval note to Management and investigation officer and then blamed the team members for the same.

(b)   SBIUK was recruiting one apprentice under Apprenticeship Programme for the operations department, and the apprentice was supposed to be reporting to her. The person was new to the banking industry, and he wanted to learn the basics of the operations department. Standard practice sending e-mails to HR requesting for actions against small mistakes instead of escalating to line manager.  Despite teaching the apprentice and supporting him, she continuously taunted him because of which the apprentice complained about her to HR and reported her actions under the bullying category. Then HR arranged a meeting with the Department Head, Assistant Manager, and the Tutor from apprenticeship agency. Her stand to sack him because he is not having banking experience. The Deputy Manager bring back to the department before meeting DM asked opinion from other members about him.

Usually, her target on everyone and she tried to play with all the member one by one through emotional sentiments. She was not ready to do accept her mistake or appraisal score.

Every time she fought with Deputy Manager and because she had support from bank senior management decision-maker.

SBIUK Bank incorporated in the UK in 1925 and have branches in the UK targeted to cater banking needs of Indian communities living in London and Midland. At present they have 12 branches across the UK. The Bank is regulated and authorised by the UK and Indian Regulators the Bank’s offering liability and asset products to customers. SBIUK has the largest branch network across the region compared to other Indian Banks in the UK. SBIUK operations department 11 employees working out of 265 employees. The department notably different ethnic background. Last three years, much attrition in the Human Resource department because of power culture.

Structure Analysis: The Operations department of SBIUK is responsible for processing the payments on behalf of SBIUK corporate and retail banking customers. 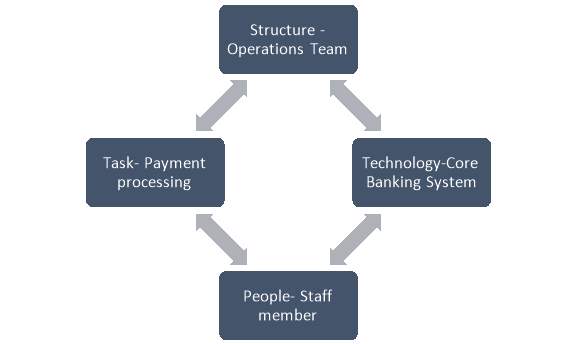 Key Strength: Specialization leads to operational efficiencies because of their expertise in the payments area with core skills perform tasks quickly and efficient manner with less error ratio.

Fundamental Weakness: Communication with other departments in SBIUK it was inflexible because of team ways of operating and the high degree of personality issues because this makes the decision-making process slow and ineffective. The department was more bureaucratic; operations unit was often not accountable to each other, and poor horizontal coordination within the department. It was affecting company goals and employee’s motivation.  The department was performing with a high level of efficiency. The level of cooperation with each other sometimes conceded. Such a group of the staff very difficult working well with each other as they may be territorial and unwilling to cooperate. The occurrence of infighting within the team caused delays, reduced commitment due to competing interests, and wasted time, making payment/process fall behind turnaround time. Ultimately brought down production levels.

The operations department consists of two major units and they have a different unique style of working and thinking process. The level of entry for this department is slightly different from other departments. The staff members belong from different ethnic backgrounds.

I believe that the SBIUK culture is currently missing in the organisation, from top to bottom, as they are not actively involved in encouraging the staff to come up with innovative new ideas aligned to values and overall objectives of the bank.

Top three weaknesses were identified including limited delegation of power to a low-level staff member, lack of clear vision about culture management and resistant stubbornness in own style of operations observed; all the affected the staff productivity and motivation factors.

The Assistant Manager1 has been working in the operations team from last two years. She did not know anything about international remittance which was a part of her job description. She tended to suppress her team members and to pressurize them to complete the work without providing extra support to them but picking every small issue and playing with the way of emotional. I believe she fell under ‘theory X’.

The Assistant manager2 was working he was decent to support team members as on when required and positive feedback to staff members and he fall under ‘theory Y’.

I went the content theory of hygiene factor (Herzberg’s) for SBIUK and found a lot a factor for dissatisfaction to affect employee productivity and increase the attrition ratio. I evaluated the Assistant Manager by interviewing the respective team members to identify the issue. I told members this process was anonymous way and summary as follows:

Post feedback from peers and the Deputy manager tried to swap the assistant manager job responsibility but no further improvement from the Assistant Manager1.

Pluralist perspective, the Operations department is formed of several sub-teams with shared (success of SBIUK) and conflicting interests between two assistant managers.

I looked out the operations department under two critical aspects of identity and a lot of negative issues.

The main challenges faced in the operations in three segments