The influence of a universal basic income will be explored through various published sources by scholars, whilst the latter part of the review will discuss the employment of millennials (age 23-38) and establishing the relationship between UBI and millennials’ employment.

The idea of a UBI is a proposed program that offers periodic cash payments to citizens of a country in a form of social security (Huang, 2018).

Huang (2018) investigates the several definitions of UBI. It is periodic, paid at regular intervals like benefits (for example every two weeks), not as a one-off grant or lump sum. It is universal, therefore no means-test is required, allowing all to benefit. It is unconditional, meaning a willingness to work or requirement to work is not necessary to receive payments. It is a payment on an individual basis, not for instance to a household or business. It is a cash payment that’s processed through an appropriate medium of exchange. Thus the system does not pay using the value of clothing or discounts towards a specific use (WB, 2019).

UBI is a growing field of interest amongst economists, governments and citizens (Huang, 2018). It has been praised as a solution to inequality, poverty and unemployment, as well as other benefits. However, no country has fully adopted the scheme, apart from some small-scale trials such as the USA (1968-1980), Canada (1975-1978) and Namibia (2008-2009), yet the countries differ in terms of culture and time.

The main concept behind UBI is for liberate those who work for financial reasons, in the hope that they can have more financial freedom rather than pursue a career for monetary gain, which in turn can increase societal efficiency since those workers could improve performance in their desired career paths. Not only would quality of life in the UK increase, but bureaucracy and the degree of government control can decrease as a result of UBI (Huang, 2018) (WB, 2019).

There is a growing body of literature indicating that welfare programs similar to UBI has no harm or impact on employment. Iranian economists Djavad Salehi-Isfahani and Mohammad H. Mostafavi-Dehzooei have published how their paper finds “no evidence to support the idea that people receiving cash transfers take themselves out of the labour force”, whilst data from the Current Population Survey shows that the yearly cash dividends that Alaskans are entitled to, had “no effect on employment”.

Any UBI scheme, Frank Field (2018) has argued, is likely to suffer from the same problems as Universal Credit, the UK’s benefit system. “The pressure to constrain costs has resulted in benefit rates being set at too low a level to relieve poverty and incentivise work; so too has the inability of a streamlined system to accommodate the additional challenges faced by disabled people, families with children and those with relatively high housing and council-tax costs.” The statement cautions against UBI overriding the complex reasons as to why a citizen would be on any type of social security program in the UK.

The introduction of UBI for specific age groups have been examined through a number of options (Martinelli, 2017). These include a “Young Adult’s Income for 18-25 year olds, a Third Age Income for individuals aged between 50 and pension age, and a Citizen’s Pension”. In each of the Young Adult’s Income and Third Age Income, we withdraw the main working age benefits (ESA, IS, and JSA) alongside a UBI of equivalent value to basic payment rates; the schemes imply net costs of £23bn and £37bn respectively. Both schemes imply 8% of household poverty reductions, with the Young Adult’s Income cheaper and effective at alleviating child poverty.

An economic recession hit in 2008, when millennials were either in education or in the midst of their careers (BBC, 2019).

Gallup (2018) reports that “a staggering 87% of employees worldwide are not engaged”, noting that attitudes to employment (which may or may not be linked with the recession) may vary.

A generation of “side hustlers” is emerging – entrepreneurial young people who work on their own projects alongside their main source of income, which has made running a second business become increasingly common (HBS, 2018). Accordingly, one in four workers run at least one side hustle business, and half of which were started in the past two years. Those aged 25 to 34 are most likely to be involved, with 37% thought to run a side-line of some kind. There are a number of reasons why many millennials – those born between 1981 and 1996 – seem to have such a strong entrepreneurial spirit.

At the same time, a side-line can provide some much-needed extra cash. HBS (2018) calculates that the average side hustler makes about 20% of their income through their second job, and are thought to collectively contribute £72bn ($93bn) to the UK economy – 3.6% of GDP.

Side hustles can offer far more than money and security. Research has repeatedly shown millennials’ priorities at work are to make a difference and create something they care about. Almost three-quarters of people who start a side hustle are following a passion or exploring a new challenge, according to the research (Henley Business School). 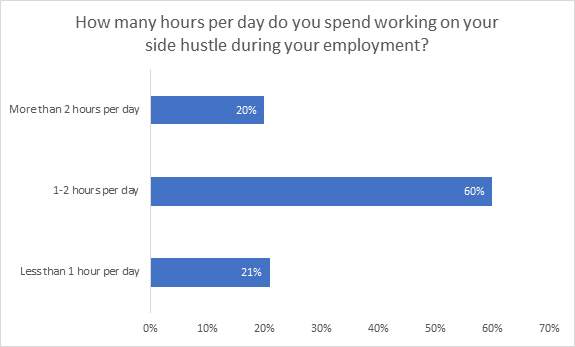 ZHCs – employment without a set number of hours – have faced a backlash recently, with some firms having been accused of exploiting workers by using them (BBC, 2019). These same workers happened to be “young, part-time women or in full-time education” which encompasses millennials (ONS, 2016).

Employees are not the only ones potentially missing out. One poll by software company CIPHR suggested 62% of those with a side hustle work on it during office hours, while 46% do not declare their secondary income to HMRC.

One way to estimate the working population is to look at the unemployment rate. The UK government have taken a number of measures to cut the unemployment rate. ONS shows above how unemployment amongst people aged 16 and over was at 5.3% in 2007, peaked at 8.1% in 2011 post-financial crisis, and from 2013 has gradually fell to 4% in 2018. Although it appears on paper that more people were employed, it does not necessarily mean that they were better off than before the financial crisis. According to Professor Phillip Alston (2019), poverty is a “political choice”, and that austerity for the past decade has caused problems in the UK.

The literature reviewed above has highlighted key areas in which research is needed. Employment of millennials generally shows that they hold down multiple jobs, whilst research on UBI indicates a dichotomy between the advantages and disadvantages of the scheme for citizens.