A War in Silence: The Gender Inequality in Workplace

It is known to us all that the concepts of gender inequality in workplace have existed from a long time ago. In history, women did not have the opportunity of having a job because of the stereotype and the lack of systematic education. And with the advocation of feminism and the advance of the society, women obtain more rights for themselves. Eventually, women gradually step into the society as well as men. However, the gender inequality in workplace is still an ongoing historical and global issue which exists in today’s society. According to the related statistics, the percentage of women going to college has surpassed men (F1). The level of education of women is actually higher than men. Some of them tend to receive more praises and honors than man and achieve better accomplishments. In the article “CEO Gender and Firm Performance”, Malayet conducts a survey which evaluates whether companies operated by female CEOs have the same level of performance as companies operated by male CEOs. Surprisingly, the result comes out that a firm exhibits more outstanding performances when the CEO is female than when it is male (Malayet). Regardless of the fact that females’ precious characteristics such as carefulness, excellent in communication, and modesty are leading to success of the companies, the majority of women still fail in the competition of job with men. 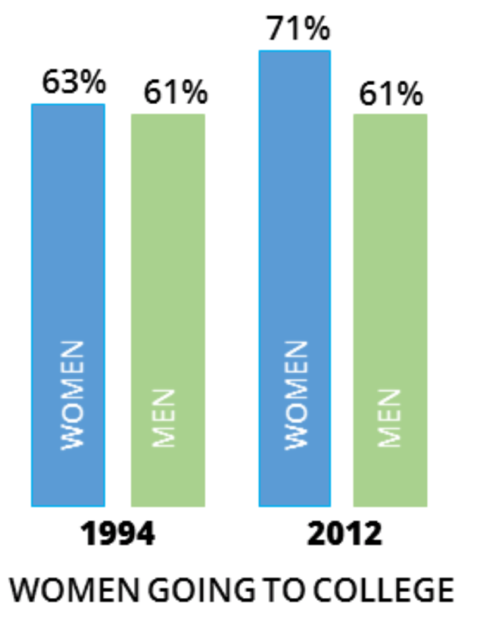 The more unpleasant fact is that those well-educated women have the tendency to be devoted to their careers to gain the same payment as men. However, societal convention states that women should take the responsibility of taking care of the children and the family. Hence, it is difficult for women to balance career and family if they want to be always available in workplace, which in turn make females have less children or no children. The gender inequality has resulted the declining birth rates. According to Mary Brinton, a sociology professor at Harvard University, “the postindustrial countries that have made it possible for women (and men) to balance work and family typically have replacement-level birth rates. Increased gender equality—both in the workplace and at home—is an important part of the solution to declining birth rates” (Brinton). So, gender discrimination has influenced not only the females themselves, but also our society. In addition to the declining birth rates, there are many other issues that have arisen due to the gender inequality. The core of solving this issue is finding the origin of it.

Here comes the issue, what is the cause of the gender inequality in workplace? From historical aspect, a series of sexist ideas make women’s value locked within the bounds of the mundane, they only need to take care of the family, and they are totally dependent on their husbands financially. In history, women do not have the opportunity of having a job because of the stereotype and the lack of access to education. People hold the stereotype of women that they do not have the same level of capability as men in work. Take an example, in many occupations, men are hired at a higher percentage because men are supposed to be stronger, enterprising and hardworking than women. All these ideas lead to the result that women are less likely to be hired and cannot obtain the same equal opportunities as men. What’s more, employers refuse to employ women to gain the goal of getting rid of the extra expense of women’s natural attachment costs to make sure that their own competitive advantages are guaranteed. According to Gary Becker’s “Economic Models of Discrimination”, this theory gives the conclusion that men and women are supposed to receive equal salary whether with discrimination or non-discrimination. However, there exists discrimination in taste. It means that the employers will try to maximize his own interests through choosing not to hire women or paying them a lower wage than men (Becker). Discrimination in taste means that females have the tendency to devote their efforts to childcare, housework and something else which is irrelevant with their jobs. Therefore, companies will hire male labor force to maintain their profits. For legislative and policy aspect, due to the general and non-operability of relevant legislation and unclear punishment, it is difficult for employers to curb and punish employment discrimination. The reason is that the standard of the law is ambiguous in the actual practice. Besides, the range of the policy is very small to make sure that all types of women victims are protected. Hence, even though there exists relevant legislation and policy, women’s rights cannot be conducted effectively to the large extent in the actual practice.

There are different types of gender discrimination in workplace. The first one is gender discrimination in recruitment and employment, which becomes the first and biggest obstacle for female college students to find a job. America has formulated a series of legislations in order to protect females’ rights and interests. Take an example, with regard to the retirement age, both males and females reach the age of 65 in USA. This regulation gives the impression that women’s labor rights and interests are protected in labor legislation. But in real life, women’s labor rights and interests are difficult to be protected. These manifestations of this phenomenon can be summarized into two categories: distinction and exclusion. Distinction refers to gender demission, which is to hire women to work in low-skilled and low-paid jobs. Exclusion refers to the situation that many employer sets some unreasonable employment ratio like the percentage of women are employed is lower than men on equal terms. According to new analysis of Pew Research Center survey data, women are discriminated against because of their gender in employment and re-employment, accounting for 42% of the total number of respondents, while men account for 22% (F2), 20 percentage points lower than women. And according to a research, “even if a male and female candidate had identical test scores, employers were more likely to hire men. There was only a 43% chance they’d pick a woman. (With no discrimination, they should pick a woman 50% of the time)” (Schrager). It can be seen that women are denied their equal rights in many different ways. 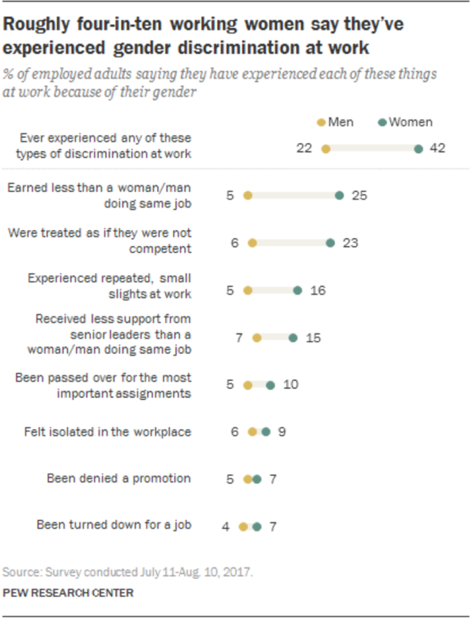 (F2) The statistics of the gender discrimination in workplace

The second type of gender discrimination is sex discrimination during employment. Despite of the first type of sexism, females are also discriminated in many other aspects in workplace such as promotion, less support, pass over important assignments and so on. . . According to the Pew Research Center survey data, the income gap between men and women is the biggest issue of the gender discrimination: About twenty-five percentage females complain that their salaries are fewer than a man who is doing the same job. However, only five percentage males complain that they receive fewer salaries than a female colleague (Kim Parker and Cary Funk), which reflects the inequality between male and female workers in terms of labor remuneration. From the passing over important assignments part, females lack the opportunities to exhibit their true talents and capabilities as well as their male colleagues. This is also a waste of exploitation of women’s abilities and human sources. What’s more, pregnancy discrimination is another obstacle for women to obtain a job. In some circumstances, once women become pregnant, employers may force them to resign through threats, job transfers and salary cuts. It can be seen that at present, women in America are particularly vulnerable to discrimination in the job market.

The third one is gender discrimination during the withdrawal from the labor market. Equal employment opportunity includes equal right not to exit involuntarily through layoffs and equal right to reemployment. The percentage of lay off workers among female workers was higher than that of male workers. Unlike the majority of the attitude towards the gender inequality in workplace, some scholars hold a different opinion of this situation. From an article – “As Layoffs Surge, Women May Pass Men in Job Force” from New York Times, Catherine Rampell raises up the thought that “with the recession on the brink of becoming the longest in the postwar era, a milestone may be at hand: Women are poised to surpass men on the nation’s payrolls, taking the majority for the first time in American history” (Rampell). Catherine explains that the proportion of women’s occupations is less influenced by the recession. Many females are likely to do less sensitive occupations like education, teacher and so on. . . Hence, there will be a tendency that many males will be laid-off, leading to the female-dominated labor force. However, in fact, the percentage of women who have been laid-off exceeds that of men. In addition, according to Bulletin of the United States Bureau of Labor Statistics, “women suffered a decrease in earnings after layoff more frequently than men. Nineteenths of the reemployed women, compared with five-eighths of men, were earning less than they had during the last month in the carpet mill” (13). These apparent facts and statistics show that women are suffering from the gender discrimination rather than like Catherine says that women will take the majority of labor force. Females cannot obtain equal treatment and opportunity as men in reemployment due to the sexism.

From my point of view, I think the gender discrimination in workplace from the past to the present has changed a lot from different types, but the influence is still existing in today’s society. The inequality has not been eliminated completely yet. Women are treated unequally in some areas like payment, promotion, employment, reemployment and so on. . . All these different types of gender discrimination have caused females to become the victims in this silent war, leading to the declining in women’s productivity, low self-esteem, and the fear of isolation and violent. And according to the statistics and articles I have searched, the gender inequality in workplace in America is still a pertinent issue which needs to be focused on. If our society or government do not take actions to change this situation, female’s rights will still not be able to be protected. Simultaneously, more and more women will experience gender discrimination in workplace regardless of their high-level education and outstanding characteristics.