Since the election of President Trump, American immigration policy has come to reflect an increasingly draconian, anti-immigrant perspective. Between Trump’s trademark pledge to build a wall on the Mexican border, his harsh crackdown on deportations as well as his inchoate, legally fraught attempts ban immigration from majority-Muslim nations, the scapegoating of immigrants (both documented and undocumented) has come to represent a fundamental cornerstone of both his campaign and nascent presidency. While his arguments are largely economic in nature, claiming that his proposals will open up jobs for American workers and raise wages (Trump, n.d.), the practical implications of such legislation are much more dangerous, and ultimately economically unsound. This paper examines the effects of an undocumented immigration crackdown on the national grocery industry.

In spite of Trump’s fear mongering rhetoric that Mexico takes advantage of the United States by using illegal immigration to export the crime and poverty in their own country” (Trump, n.d.), undocumented workers actually play a crucial role in supplying America’s groceries. With Reuters reporting that up to 70% of farm workers may be undocumented (Abbott, 2013), it appears that immigrants are not actually job thieves; rather, they take jobs that, even in their absence, Americans refuse to fill (Dwoskin, 2011). In the absence of that labor, America’s farm industry stands to lose as much as $9 billion annually (Abbott, 2013). This leaves two options for producers in the agriculture industry: shut down (causing nationwide food shortages and economic damage as the US adjusts to a forced spike in food imports), or raise wages to hire American workers. If Trump’s policies (including a tax on Mexican imports) work as intended, the latter will still be the most economically sound option, and American farms will begin employing native workers at higher wages.

In order to offset the increased labor costs, however, farms will be forced to raise their prices significantly or go out of business, causing a shift in the supply curve (as opposed to movement along the curve). However, the fundamental Law of Demand states that a correlate decrease in demand will follow the jump in prices. While the demand for fresh fruits and vegetables in the US is relatively inelastic, at 0.71 and 0.98, respectively (Andreyeva, Long & Brownell, 2010), the inelasticity is not perfect; resultantly, disadvantaged Americans will begin consuming inferior goods such as processed foods (which have long shelf lives and cheap production costs). In this way, sourcing American laborers with higher wages would not be a profitable alternative to the current system, as illustrated in the following chart: 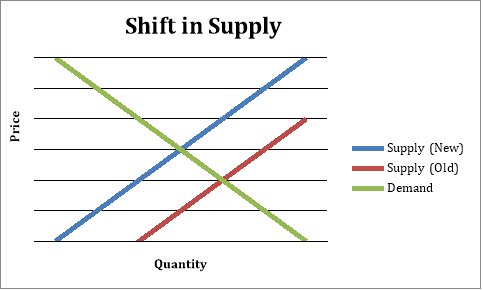 At this point, the farm industry would again be left with three choices: either lower wages (causing an exodus of workers), lay off workers and align to a new, smaller economy of scale (causing more movement of the supply curve), or shut down entirely (causing, again, grocery shortages and greater importing of food).

Interestingly, a possibility also exists that Trump’s policies may actually have the effect of lowering wages straight away; this would result from one other noteworthy, though unintentional, consequence: decreased reporting by undocumented workers of labor violations (Jamieson, 2017). As undocumented laborers increasingly fear deportation, they may be less likely to inform authorities of violations such as forced overtime and wage theft. The lack of reporting would then ultimately strengthen (not weaken) the motivation for unethical employers to cheat their laborers. Combined with the Trump administration’s lax attitude towards business regulation, the argument that his policies may backfire remains compelling.

Regardless of the actual effect of Trump’s crackdown on undocumented immigration, one consensus is clear: it’s will not go as planned, and may cause significant damage to the US economy.