Degree of openness in trade giving a definition of level of one country and its economy having trade with another country. FDI (foreign direct investment), import, export, repatriation of funds abroad and lending are examples of trading elements.

Malaysia economy having high degree of trade openness and financial openness. Financial openness can refer to the total of external assets and liabilities relative to GDP. In 2004, the trade volume has increased twice the size of economy. Moreover, the amount of external assets and liabilities also twice of the size of economy in 2004. 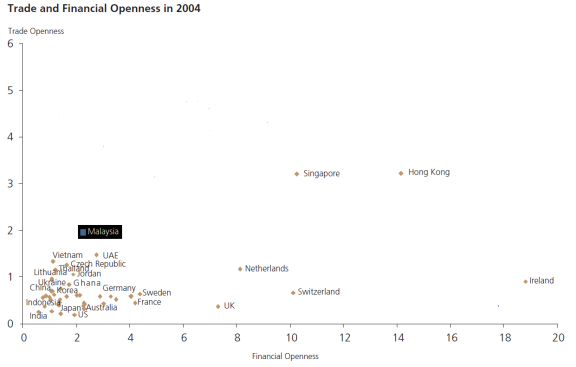 Figure above shown that Malaysia rates high among 28 emerging economies from Asia, Eastern Europe and Latin America. Originally, Malaysia is rating with 58 economies that make up the OECD (Organization for Economic Co-operation and Development) but the graph above only show out 28 emerging economies. Trade openness of Malaysia only lower than Hong Kong and Singapore which is well known of financial centre nature. Besides that, Malaysia also having high ranking in financial openness with more than median score, 2.03. Surprisingly, Malaysia having higher financial openness than United States and Japan with well developed economies. However, comparison in East Asia, Malaysia ranks lower than Singapore, Brunei and Hong Kong. 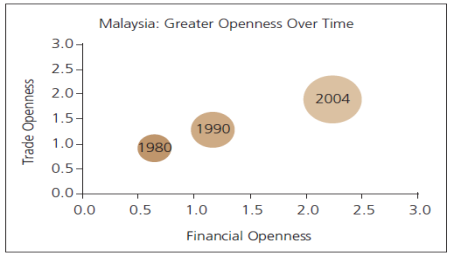 Diagram above indicated that the Malaysia trade openness has increasing significantly from 1980 to 2004. One of the reasons of increasing trend in trade openness is structural changes occurring in Malaysia’s economy based on its trade direction. Besides, open current account and liberalization of capital account also reasons influenced increasing trade openness. As Malaysia became more and more integrated with global economy, Malaysia’s economy and financial system will significantly become more and more ingenious.

The ratio of exports and imports to GDP in Malaysia

A related concept that has received much less attention from theorists is that of the degree of openness of an economy. The relevant question is not what does a country export or import but how much does a country export and import in relation to its GDP. The theory of commercial policy establishes a relation between protection and volume of trade.

Commonly, judgements on commercial policies of Malaysia are made based on the comparison of volume of trade to GDP ratios. These comparisons and policy recommendations are usually done without resort to any theory stating which are the factors determining the degree of openness of an economy.

Table 1 shows basic data for the world’s extremes in terms of openness. (Carlos Alfredo Rodriguez, 2000) The extreme variability of openness ratios is quite evident. While Malaysia exports are 93% of its GDP, Myanmar’s exports are just 1.5%. The commercial policy is one determining factor in explaining some of these observed differences. Myanmar is more protectionist than Malaysia. They conclude that protectionism alone cannot explain openness. However, the more protectionism should be associated with less openness.

The other variable they want to focus on is country size. Small economic units must specialize in producing few goods in order to attain optimal scale and be competitive. They must therefore export those goods in exchange for the imports of the goods they do not produce.

Malaysia is a developing country, thus it should be more open on the degree of openness. They expect the trade to GDP ratio to be both negatively related to size and to a measure of protectionism.

The structure of the Malaysia’s imports and exports

In early 1980s, Malaysia began its export-oriented development strategy focusing on the exports of manufactures. Since it does not have abundant in raw materials and capital goods, Malaysia have to import more of the intermediate manufactured goods and the machinery and equipment from oversea. In 1970s, the structure of Malaysia imported almost an equal proportion of food, beverages, tobacco, and fats at 21 percent; inedible crude materials, mineral fuels, and lubricants at 20 percent; intermediate manufactured goods at 25 percent; and machinery and transport equipment at 28 percent. (Yusoff, M.B. 2005)

There have been major changes in the degree of “openness” of Malaysia in recent decades.

From a primary producer with a gradual industrialization strategy, the Malaysian economy has undergone transformation into a highly-open economy through greater trade and financial integration since the late 1970s. As a result, Malaysia’s trade openness is among the highest in the region, reaching a peak of 192% of GDP in 2000. (Annual report 2012)

Models by Grossman and Helpman(1991), Rivera-Batiz and Romer(1991), Romer(1990) suggest that the expansion of international trade increases the number of specialized inputs which then causes economic growth as the domestic economies become more open to international trade. Consistent with its outward-looking growth strategy, Malaysia have a balanced export structure. This structure has produced a good counterbalance when manufacturing (e.g. electrical and electronics products) exports fell, exports of primary commodities (e.g. rubber and tin) increased because they had different consumers and demand cycles. In addition, Malaysia’s manufacturing and primary commodity exports tend to be upgraded to incorporate higher value added and innovation. Thus, technology acquisition and availability of skilled labor are essential for this transformation in order to develop more exports that originate in Malaysia. (Mahani Zainal Abidin, 2011)

If China and other Asian countries are able to generate their own domestic demand, then the prospects for Malaysia’s exports will become bright. Consequently, East Asia has now become Malaysia’s largest trading partner through the diversification of the markets. The share of China in manufactured exports has increased from 1.7 percent in 1996 to 12 percent in 2009. The share of the Association of Southeast Asian Nations remains at about 27 percent. However, the share of traditional markets has declined whereby the United States to 13.2 percent in 2009 from 21.7 in 1996, the EU to 12.2 percent from 14.5 percent, and Japan to 7 percent from 11.1 percent for the same period. (Mahani Zainal Abidin, 2011)

Therefore, Malaysia operating now continues with the outward-oriented development strategy, it had kept its tariff levels at significantly low levels by the developing country standards. Unilateral, regional and multilateral initiatives in recent years have caused trade weighted average tariff to be as low as 8 per cent, down from 15 per cent at the beginning of the industrialization drive. (Ariff, 1998)