The law of diminishing marginal returns

The Theory of Production Process

Major Processes of a Producing Company

The law of diminishing marginal returns

Thus, as per the theory of the law, it can be concluded that when other inputs are constant and one input is added to increase the output, after a certain level, the output will start falling down. Due to its characteristics, the theory is also named as “law of variable proportions”. 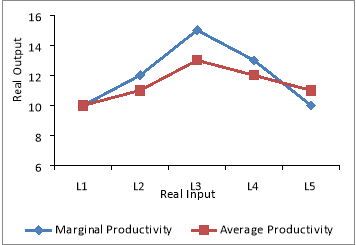 In figure 1, the example clearly states that as per the law of diminishing marginal returns as the labor unit is increased from L1 to L3, the output also reached its maximum but after further increase in input, the output started to diminish. Hence it is true that as we add input our output will increase but at a decreasing rate and stay below the average product output. Therefore, it is stated that as with the increasing input, the output increases at a decreasing rate and shall always stay below the average output of the product.

To distinguish between how much of economic growth is attributed towards the changes in factor allocation and how much is towards advancing technology, total production functions are estimated while estimating the results in macroeconomics (Law of Diminishing Marginal Returns).

The aim of the project is clear as to analyze “the three stages of production process”.

The research has the following objectives:

The project will be helpful for the manufacturing companies as it relates to the adoptions of production process at various stages and analyzes the level where maximum level of output is attained. Therefore, such companies can analyze their production processes and make effective use of resources to get desired output from the limited input.

This project includes literature review, wherein various worldwide organizations with distinct production stages are studied. Literature review is also done on the concept that relates to optimum production process. This review will help the organization in understanding the benefits of the process and they will become aware of various challenges and how these can be overcome.

The Theory of Production Process

To produce a range of output, any given set of input can be used and therefore mathematical function of input differs from the economic output. The production function also satisfies the mathematical definition of a function by utilizing a given set of inputs to specify the maximum output obtainable. Therefore, the production function represents each feasible combination of inputs accessible from the limit of output. The production function does not relate with any monetary aspects that means that every input and output relates to its physical sense and does not reflect any price or cost associated with it. In other words, price is constant and not considered.

When the production function comes with certain assumptions, it can also derive a marginal product for each factor of the production function. In perfect competition where prices of input and output are included, a firm with the objective of profit-maximization will prefer to add inputs only up till the point where the marginal cost of additional input and additional output matches each other.

Abbreviations of the above formula are as: 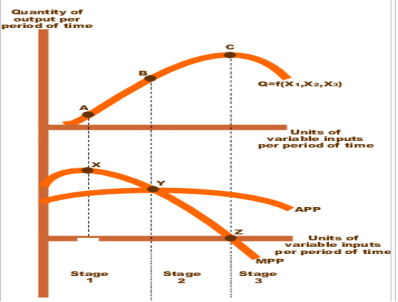 Through points A, B and C, the production function is rising. The firm will experience positive yet decreasing marginal returns from point A to C. The marginal utility will increase with a decreasing rate, with every additional units of input. As the graph shows declining slope, there are diminishing average returns beyond point B. the graph beyond point Y shows the average physical product curve (APP). The average physical product is at its maximum at point B, because it is tangent to the steepest ray from the origin. As per the mathematical necessity, the marginal curve will be below the average curve at any point beyond B.

Before understanding the three stages of production, it is integral to analyze the three product curves involved in economic production. The three curves are known as:

For a simplified interpretation of production function it is divided into three simple stages.

Stage 1: Stage one is the period of most growth in a company’s production. In this period, each additional variable input will produce more products. This signifies an increasing marginal return; the investment on the variable input outweighs the cost of producing an additional product at an increasing rate. As an example, if one employee produces five cans by himself, two employees may produce 15 cans between the two of them. All three curves are increasing and positive in this stage.

Stage 2: Stage two is the period where marginal returns start to decrease. The output increases at a decreasing rate, and the average and marginal physical product are declining. In other words we can say that each additional variable input will still produce additional units but at a decreasing rate due to the law of diminishing returns. However, the average product of fixed inputs (not shown) is still rising, because output is rising while fixed input usage is constant. In this stage, the employment of additional variable inputs increases the output per unit of fixed input but decreases the output per unit of the variable input. For example, if a previous employee added nine more cans to production, the next employee may only add eight more cans to production. The total product curve is still rising in this stage, while the average and marginal curves both start to drop. The optimum input/output combination for the price-taking firm will be in stage 2, although a firm facing a downward-sloped demand curve might find it most profitable to operate in Stage 1.

Stage 3: In stage three, marginal returns start to become negative. Adding more variable inputs becomes counterproductive; an additional source of labor will lessen overall production. For example, hiring an additional employee to produce cans will actually result in fewer cans produced overall. This may be due to factors such as labor capacity and efficiency limitations. In this stage, the total product curve starts to trend down, the average product curve continues its descent and the marginal curve becomes negative. In Stage 3, too much variable input are being used relative to the available fixed inputs: variable inputs are over-utilized in the sense that their presence on the margin obstructs the production process rather than enhancing it. The output per unit of both the fixed and the variable input declines throughout this stage. At the boundary between stage 2 and stage 3, the highest possible output is being obtained from the fixed input. (Kung, 2014)

The above table can be read and summarized as follow:

In stage 1, it is profitable for the firm to keep on increasing the use of labour. From the above table only stage 2 is rational which means relevant range for a rational firm to operate. In stage 3, MP is negative and hence it is inadvisable to use additional labour. (Weebly, 2011)

To understand the three stages of the production process let’s take example where we can differentiate all the stages based on the output received from the input provided as follows: 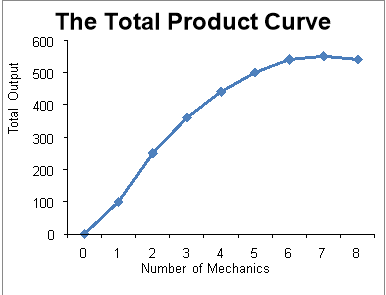 To calculate average product we can use formula as 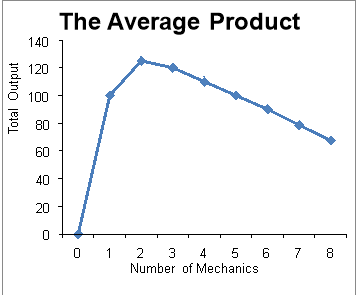 Marginal Product is calculated as: 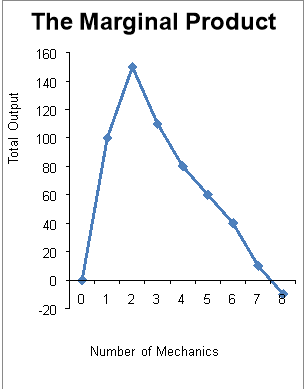 Major Processes of a Producing Company

A producing company can be divided into the five identified main processes, each with a logic, objectives, theory and key figures of its own. It is important to examine each of them individually, yet, as a part of the whole, in order to be able to measure and understand them.

Based on the above process we can see that the main processes of a company are as follows:

It is recommended that a economy will have three kinds of returns to scale concept for various industries which says that if an industry is characterized by increasing returns to scale, there will be a tendency for expanding the size of the firm and thus the industry will be dominated by large firms. The opposite will be true in industries where decreasing returns to scale prevail. In case of industries with constant returns to scale, firms of all sizes would survive equally well. The important conclusion from this study can be derived as when we try to maximize the welfare effects of production we have to maximize real income formation. Maximizing productivity leads to a suboptimum, i.e. to losses of incomes. A practical example will clear the understanding. for example, when a jobless person obtains a job in market production we may assume it is a low productivity job. As a result average productivity decreases but the real income per capita increases. Furthermore the well-being of the society also grows. This example reveals the difficulty to interpret the total productivity change correctly.

Apart from the above conclusion drawn, we can also say that In stage 1, it is profitable for the firm to keep on increasing the use of labor. Stage 2 is rational which means relevant range for a rational firm to operate. In stage 3, MP is negative and hence it is inadvisable to use additional labor. (Saari, 2011)

Kung, R. (2014, May). Three Stages of Production in Economics. Retrieved from eHow: http://www.ehow.com/info_8016435_three-stages-production-economics.html