To understand what was in the minds of those who conceived and developed economic regulations for air transport, a good place to start is the Second World War.

The aviation industry was experiencing its second period of very rapid technological development, the first such period having occurred during World War I. In 1944, it was clear that aviation would play a much bigger role during peacetime after the war, than it had done before the war. The tide of the war had turned and there was a sense that it would soon be over (The History Place, 2014).

The minds of world leaders began to focus on post-war matters. The world had been through two wars in close succession and there was a determination that this cycle should not be repeated. In his ‘State of the Union’ message to congress, on 11 January 1944, President Roosevelt said “We are united in determination that this war shall not be followed by another interim which leads to new disaster- that we shall not repeat the tragic errors of ostrich isolationism” (Peters G and Woolley J, 2014).

The sentiment expressed earlier in the year by President Roosevelt was encapsulated in the preamble to the Chicago Convention:

“. . . whereas it is desirable to avoid friction and to promote that cooperation between nations and peoples upon which the peace of the world depends; therefore, the undersigned governments having agreed on certain principles and arrangements in order that international civil aviation may be developed in a safe and orderly manner . . . and operated soundly and economically; have accordingly concluded this convention . . . ” (ICAO, 2014).

In respect of an economic rationale for the work that had been done, Adolf Berle, a close advisor to President Roosevelt wrote after the conference:

“a substantial beginning has been made towards opening the air to commerce. It is not too much to say that we entered the Conference in the law and atmosphere of the 17th century; and we came out with a fair prospect of obtaining 20th century conditions. Faithfully yours, ADoux A. BERLE, JR.“ (United States Department of State, 2014)

The Chicago Convention was an agreement between nations. Outside of its scope was the question of which airlines flew where and what fares they charged. Domestically, in the US, that function was performed by the Civil Aeronautics Board (CAB) under 1938 legislation. Internationally, it was to be managed by means of bilateral agreements. A standard form of bilateral agreement was prepared by the Chicago meeting (ICAO, 2014).

In 1945 the International Air Transport Association (IATA) was founded and took on the role setting fares. The first IATA fare-setting conference was held in 1947. Aviation grew rapidly over the following decades and IATA’s work expanded. By the 1970s, the IATA conference had become a mammoth undertaking and was approving and publishing 200,000 passenger fares and 100,000 cargo fares (Tiernan, 2013).

A majority of Americans (54%) believe that government interferes too much in society and in business (Gallup, 2013). Small government is a philosophy the main tenet of which is that government should get involved in as little as possible and should stay out of the way of business. In the United States, President Ronald Reagan was one if its main advocates (Boaz, 2004).

The economic regulations contained in the Civil Aeronautics Act (1938) and the Chicago Convention (1944) lasted until 1978 when some of them were repealed by the Airline Deregulation Act. Although airline deregulation is clearly an initiative that was specific to the airline industry, it is useful to see it in the context of small government. The 1978 changes were consistent with a move towards small government. It was President Jimmy Carter who signed the act into law, towards the end of his presidency in October 1978, but it was Ronald Reagan who oversaw most of the resulting changes and is associated with deregulation in the public mind (Goetz and Dempsey, 1989).

Ownership of an airline in the US is regulated. No more than 25% of an airline may be owned by non-US citizen(s). In Europe, a similar provision exists but the upper limit on foreign ownership is 49%

The economic rationale behind these rules has been presented variously as a wish to protect a fledgling industry or (in the US) military reliance on civilian airliners to provide supplemental capacity in time of war (GAO, 2013). However, one cannot but suspect that it is in fact protectionism of an industry that has in the past been regarded as a sort of national asset, a flag-carrier.

The practical effect of these restrictions is to prevent cross-border airline mergers, acquisitions and investments.

The Chicago Convention specifically outlawed cabotage, i.e., the carriage of passengers (or freight) within the territory of another state. Since then, other developments have reduced the impact of this restriction, most notably European Union treaties which have created a single-market in EU member states so that cabotage restrictions no longer apply there and any EU-based carrier may operate services within the borders of any ether EU-state. This is not the case outside of the EU. Aer Lingus may not carry passenger between New York and San Francisco. Similarly, American Airlines may not carry passengers between points within the European Union.

Article 24 of the Chicago Convention stated that aviation fuel would be exempt from taxes. That article remains in force today.

There is general agreement that the world’s climate is changing; and, that the cause is manmade. The proposed solution is ‘sustainable development’. The concept of sustainability is central to the subject of climate change. Sustainable development is defined as “development that meets the needs of the present without compromising the ability of future generations to meet their own needs” (World Commission on Environment and Development 1987).

Understandably, pressure is building on the industry to reduce CO2 emissions. In particular, there are calls for the removal of Article 24 of the Chicago Convention in order to end the use of tax-free fuel which the industry has enjoyed for almost seventy years.

A Note About Safety

Between 1944 and today, the aviation industry has achieved significant improvement in its safety record. Passenger fatalities have dropped while the industry has been growing. Figure 1 graphs an index of fatalities relative to passenger number during sixty years between the year 1950 and 2010. 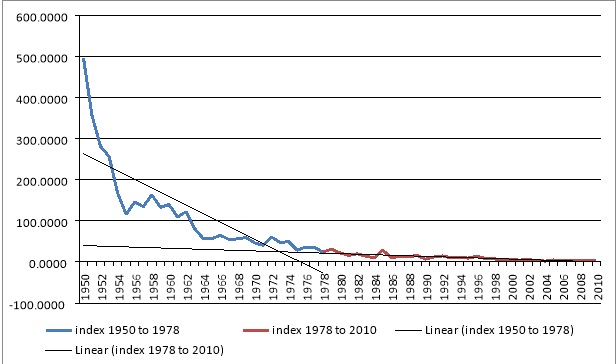 The blue line indicates progress between 1950 and 1978, which was spectacular. Before deregulation, engineers and pilots had much more influence at airlines than they have today (McManners, 2012). The regulated environment that existed for 35 years (1944 and 1978) was one in which costs and profits were less important than they are today. In that environment, technical departments encountered less resistance when proposing safety-related initiatives than they might today.

The red line indicates progress between 1978 and 2010 which has been less marked. This is not to suggest any causal relationship between deregulation and safety. It seems much more likely that the cause of the decline is the law of diminishing returns. One can only speculate about what the rate of progress might have been, had intense competition been introduced sooner.

The significant impacts of economic regulation have been:

Economic regulation has been good for the airline industry. It has served to protect it during a time when it needed to be nurtured and developed.

If we look at airline economic regulation through the lens of small-government, deregulation, and market-is-king thinking of today, we are liable to miss the point. Better to look at it through the lens of a world still at war and the lenses of a group of 185 delegates from 52 nations; strangers who came together in a hotel in Chicago for five weeks and who between them had the belief, foresight and imagination to envisage something that didn’t yet exist. It does now.

McManners, Peter (2012) Fly and be Damned: What Now for Aviation and Climate Change? London: Zed Books.

The History Place, http://www.historyplace.com/worldhistory/genocide/holocaust.htm [accessed, 22 May 2014]

1. What is the economic rationale for the regulation of air transport markets? What impacts have regulations had?

Question: Do you mean what was the economic rationale etc. in so far as most economic regulation is now gone, so this would be an essay about pre-deregulation times?

Answer: The essay is looking for a more general perspective on the arguments put forward for government intervention in transport markets – so you can cover past and present experiences and economic rationales – many of the historical arguments may no longer be valid, but it is worth rehearsing that they may have been appropriate given the stage of development of say, the airline industry in the 1930s/40s. You have considerable flexibility in what you cover in your essay.

2. Outline the role and impact of network structure on airline behaviour and performance.

Airline behaviour? P2P = no bag transfer; no responsibility for lateness

The role of landing fees in influencing network type

Paradox re full-service versus point-to-point;

3. How and why might you undertake a cost analysis of an airline? What difficulties might arise in undertaking such an analysis?

Answer: I am not imposing any particular perspective for the 2nd question – you might outline why cost analysis is useful for a firm as well as for regulators or industry analysts. You can discuss the data requirements for undertaking such analyses and the likelihood of these data being available. Again, you have considerable scope to shape the essay any way that you wish.

Why costs analysis is useful for a firm

For an industry analyst

The data requirements and the likelihood of it being available

Legacy costs at the legacy carriers

No! it just seems that way!

Is it infrastructure if is it business?

Sum of profits to date = losses; compare that with other industry(s)

Demand is derived; Is there another industry that is the same? Car rental? hotels?

In the context of a sector where the other four elements (manufacturers; financiers; airports and MRO etc.) do make money? Parallel? NB, take a holistic view it is profitable