Productive allocative and distributional efficiency in an economy

Within an economy, there is a possibility that the factors of production of a set of commodities are fixed. When this condition is arrives, tradeoffs takes center stage in order to distribute the available resources effectively. At a point where the distribution of resources is maximizing the production and that there is no surplus or stretch to impossible limits, the economy has reached its efficient level (Jowsey, 2011).

In this paper, the concept of the concept of production possibility frontier is used to demonstrate other economic terms. Specifically it is used to illustrate allocative distributional and productive efficiency within an economy. Moreover, the possibility of allocative, distributive and productive inefficiencies in the manufacturing sector of the People’s Republic of China. 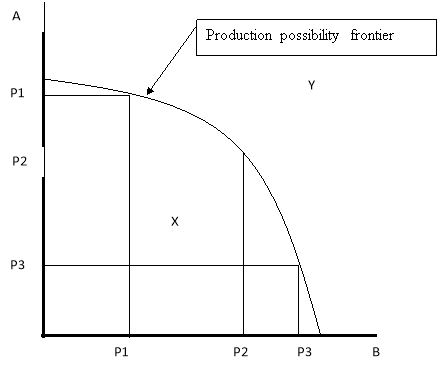 The curve represents the boundary that this particular economy can produce the two commodities A and B. It is the limit at which if the available resources can produce the commodities without strain. Two locations stand out in the curve above. At position x, the resources that are available are not fully utilized. This is mainly because at this point in time, the economy is not operating at a full potential. At point Y, the economy cannot operate because the available resources cannot sustain the production of two products.

The economy can be sustained at Y only if there is an economic growth. However, that would still be difficult since there are limited resources that cannot be stretched any further. According to Antonneli (2011, pp 145), the only possibility of this economic growth happening is through the advancement of technology. Efficiency, in this case, comes through technology and the labor cost reduced. However, this growth is nullified with the cost of introducing technology (Jowsey, 2011).

This curve therefore is most likely the cap of what this entire economy can produce. Therefore tradeoffs have to be made on which resources to be distributed to which sectors in order to maximize their use.

To explain the concept of productive efficiency, consider the graph above. Assuming that the two commodities are not in any way related but, the desire to grow the economy towards point Y will dictate the tradeoffs taken. This implies that there should be no wastage of resources and at the same time no product should be sacrificed in order to grow the economy (Jowsey, 2011). In the graph above, points P1 implies that there will be a maximum production of commodity A but a minimal production of commodity B. This means that the economy is not utilizing it resources well. However, if the demand for commodity A was highest in this economy, then at this point, then this position is referred to as a point of allocative efficiency. At this point, the major good that the economy or many of the producers produce are those that are in very high demand. The aim of the producers or the economy is to reduce potential surplus of other goods produced. In Coeli and Coeli (2005, pp 57), the allocative efficiency is described as a measure to maximize on revenues and not necessarily on profits.

At point P2, the production of both commodity A and B is operating at the production possible frontier. At this point the economy is using all its resources to produce all the products that it can. This implies that no resources are underutilized and there is no single commodity that is sacrificed for another. All the commodities in the economy are left to the forces of the market and an ideal competition situation is expected. This is the point of productive efficiency and in some cases refered to as the productivity since it compares the ratios of inputs to outputs (Buchanan 1985, pp 6).

It is also possible to explain the concepts of distributive efficiency from the graphs above. Take for instance the points P3. At this point of the graph, the resources which are responsible for producing the commodity A are very minimal. Furthermore, the resources which are responsible for the production of substance B are many, and this leads to a high production of substance B. However, according to the principals that guide the concepts of diminishing marginal utility, this cannot be the case (Mukherjee, Mukherjee and Ghose, 2003, pp 49). This is mainly because, at the point when substance B has reached its maximum, and the development of the economy is less likely to improve, then the additional resources that emerge are to be used in other fields, and are not for production purposes (Coeli and Coeli, 2005). This implies that the more the resources they receive the more they are less likely to get utility from the same. Thus distribution is not fair in this case. In order to achieve distributive efficiency, the producer must avail just enough resources for production and not anymore to achieve distributive efficiency. Distributive efficiency therefore is described as a state in which the resources availed for purposes of production are not put into waste and is put towards the appropriate use (Jowsey, 2011, pp 21).

This second section looks at the allocative inefficiency in the manufacturing industry in China. There has been a significant difference in income across different countries in the recent past. This has been attributed to the fact that different counties have different aggregate productivities. The cause of this phenomenon is attached to the fact that there could be a level of allocative inefficiencies that occur at some point. The following table gives a comparison of the total factor productivity gains of a number of countries in the manufacturing sector.

According to (Lashitew, n.d. 2015) the total factor productivity of China or India could improve by a margin ranging from about 30 to 60 percent. This study attributes this outcome to the fact that within these countries, there is a significant misallocation of resources within the manufacturing industry. It also singles out India as the other country with the potential to improve its performance. In the case of India the study identifies labor allocation as the main area for improvement.

Hsieh and Klenow (2008) explain that that in order to correct this phenomenon caused by this misallocation, the Chinese manufactures should focus on the investment on smaller manufacturing plants. This will lower the costs of production marginally by preventing distributional inefficiencies. This study further indicates that the methodology is not common in the United States and as such should be exploited by the Chinese manufacturers.

In conclusion, for an economy or industry to achieve maximum productivity, there is the need for an adept allocation of resources to the appropriate sectors. This is the only method that will result in maximum results and eventual increase in revenue.

Factors of production within an economy are limited in nature. It is therefore potentially difficult for an individual economy to grow if it does not utilize the resources that it has in an efficient manner.