According to Phlips (1983, p.5) “the more one thinks about price discrimination, the harder it is to define.” Phlips (1983, p.6) suggests that price discrimination should be defined as” implying that two varieties of commodity are sold (by the same seller) to two different buyers at different net prices, the net price being the price (paid by the buyer) corrected for the cost associated with the product differentiation”. Another definition of price discrimination is “where a firm sells the same product at different prices” (Sloman, 2006, g.13). Geographical location, gender, race, age and income are some of the aspects in which discrimination among buyers may be established. In order for price discrimination to work, businesspeople must be incapable of buying goods at the lower price and reselling them at a much higher cost. The firm or company must have to some extent, monopoly power and firms must be capable of classifying domestic and industrial consumers (Economicsonline.co.uk, 2014). Laws against price discrimination have pursued to hinder its use by one business retailer driving out another competitive seller “bankrupt” by depreciating the rival in his own market, whereas retailing at a higher cost in other markets. (Encyclopedia Briticanna, 2014). There are three types of price discrimination. These are: first-degree, second-degree and third-degree price.

According to Dwivedi (2006), the first-degree (also known as perfect price discrimination) is considered the “discriminatory pricing that attempts to take away the entire consumer surplus”. Investopedia (2014) defines consumer surplus as a form of economic strategy used to evaluate customer satisfaction. This is analyzed by exploring the difference between what customers are prepared to pay for each and every single good / service comparatively to the market price. Dwivedi states therefore, that only when the seller discerns the precise amount that a buyer is willing to pay for an item, (buyer’s demand curve) will first-degree price discrimination be deemed as successful. But how will the seller know this information? Dwivedi states that firstly the seller initiates the highest buying price that consumers are ready to pay (some may be willing to pay an elevated price while others at a lower price) and buy at minimum a unit of a product. Only when the consumer surplus of this segment of customers is used up, the seller then progressively lowers the price so that consumer surplus of the buyers regarding the subsequent products can be obtained.

An example of first-degree price discrimination provided by Cabral (2000, p. 170) is that of a doctor providing health care in a small town and who has ample information of all the people living in the town, particularly their financial status. Acting on this information, the doctor analyzes the client willingness to pay each fee and sets a suitable price.

Another example provided by Cabral, is by aircraft. While certain manufacturers publish a list of fees for each airliner, in actuality each airline shells out a different cost for each aircraft.

The graph image below shows a monopoly representation of the first-degree price discrimination. MC (marginal cost) and ATC (average total cost) are the regular curved shapes with MC traversing through the minimum point on the ATC curve. The solid line that slopes downwards represents the firm facing the market demand curve, which is identical to the firm’s demand curve, (D = d). The marginal revenue relates to the firm’s demand curve, (d = MR) since the company expenses every customer the highest price he / she is ready to make. At the output level, profit maximization happens; matching to MR equals marginal cost. Plast represents the price for each and every last unit of product sold. Subsequent units have a higher price. The end profit for the company adds up to the profits received for every unit subtracted from the ATC per unit (ATC0). The shaded area displays the total profit earned since the price for every unit is the highest price as established from the demand curve. Graham (2013). 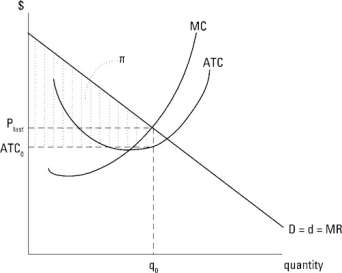 According to Mukherjee (2002), second-degree price discrimination is where prices vary depending on the amount of output bought by each consumer. This is also known as “volume discounting”. The seller incurs a higher “per-unit” cost for the lesser units sold while for the larger amount of product are sold at a lesser per-unit cost. Similar to the first-degree price discrimination, the company will result at a quantity of output where the marginal costs are covered by the prices charged. The objective of the seller is to draw out not the entirety of the consumer surplus, but just some of it as profits along with a remaining surplus. Ruby (2003).

The illustration below represents a graph of second-degree discrimination. Ruby from digitaleconomist.org, utilizes an example of a company charging a variation of three prices for one item. He points out that if a user decides to purchase Q0 units then the cost P0 is charged for each unit of the good. For a larger quantity Q1 a lower charge P1 is made and for quantity Q*2 the price P2 is charged. “(the level of output such that P2=MC (Marginal Cost)” 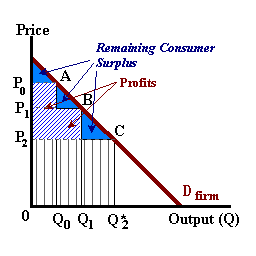 The third-degree price discrimination occurs where a firm is capable of dividing its consumers into different markets and charging different prices. Or in other words, charging different fees to each customer class. Each market is distinguished by exceptional “demand” characteristics. It is noted by Ruby that some of these particular markets may be “less” price sensitive in correspondence to others where the quantity demanded is more “sensitive” to cost alteration. This form of discrimination is very similar to second-degree price discrimination.

An example provided by Managerial Economics, Hirschey (2009), is that a bus company may incur a lower fee and apply this type of price discrimination towards senior / aged people, as well as the disabled / handicapped individuals. This will therefore benefit these particular customers, providing a great service to ride the bus. Due to the increase of revenue earned from these passengers, the bus company may provide additional services such as going off route (routes that could not be maintained by the income from those full-fare customers only or it may be capable of functioning with a lesser taxpayer subsidy.