It is inevitable that world prices of commodities are increasing substantially. The increase of commodity prices does not only affect producers and consumers, but also governments. Around the world, governments face renewed pressure to reform their budgeting processes, including Malaysia. Malaysia has a well-established infrastructure and is one of the most economically advanced countries in South Asia. This essay is opted to discuss the rational of price hikes and its impacts to the cost of living particularly in the Malaysian context as well as providing the blueprint for Malaysian government in bracing the price hikes.

2.0 Do Oil Price Increases Cause Higher Other Commodity Prices?

Current commodity price hikes are not only affecting the Malaysian economy and society, but also affecting the whole world. According to OECD Economics Department Policy Notes, commodity prices have risen considerably since mid-2010. The rational of price hikes is due to the price hikes of world’s primary sources like crude oil, food, steel, wheat and such. Oil is one of the world’s basic necessities and the backbone of most countries, especially developing countries, as some developed countries do have renewable resources as alternatives in their productions of commodities. OECD Economics Department Policy Notes states that higher energy prices have contributed to rising food prices, because energy accounts for over one-third of the cost of grain production.

2.1 Scarcity of Oil as One of the Important Natural Resources

This is further encouraged by the scarcity of natural resources and raw materials. It is expected that world supply and production of oil are falling into depletion. This problem is commonly referred to as “peak oil”, where the production of oil reaches a maximum and will subsequently begin to decline until full depletion is ultimately reached. According to Hassan (2010), it is expected that the world’s oil supply will be completely diminished by 2025.

Commodity prices are largely determined by international market powers within regional basis at most of the time. This shows that commodity prices are in-part out of government’s control in most countries around the world including Malaysia.

According to Datuk Dr. Wee Ka Siong, Ayer Hitam MP and MCA Deputy President, 2014 is seen as a tough year for Malaysians as the prices hikes, including the impending ones that impacting the middle-income earners and below (Foong, 2014). The price hikes are assumed as one of the impacts of the Malaysian government’s rationalisation exercise of fuel subsidies and the electricity tariff in the effort of reducing the nation’s economic burden.

The Malaysia’s federal government is in a bad state because it is spending more than it earns, causing a persistent budget deficit. Malaysia’s debt-to-GDP ratio is higher than officials would like. With the exception of India, that deficit burden is the highest among the Non-Japan Asian economies (KPMG, 2011). According to Deputy of Ministry of Finance Datuk Ahmad Maslan, at the end of June 2013, the federal government owed tax of RM 284.7 billion, which is 28.8% of Malaysian GDP (Bernama, 2013). Until September 30, 2013, the shortfall is funded by the federal government incurring more debt, which was in total of RM529.2 billion or 53.6% of GDP (Bernama, 2013).

According to Shanmugam, “In Malaysia, the electricity tariff, food prices and toll rates on urban highways are all going up in 2014 as the government cuts subsidies and reigns in its operating expenditure”. Scrapping energy subsidies has become a target for government austerity measures over the past years. In complying with the latest budget, Malaysia has recently cut its annual subsidy on petrol and electricity (The Economist, 2014). Malaysia slashed its petrol subsidies by 20 cents a litre and by 20 to 80 cents on diesel (BBC News, 2013). This is the first time in more than two years that Malaysia cuts fuel subsidies as it tries to reduce its budget deficit. On the other hand, the electricity tariff in Malaysia is increased by an average of about 14.89% for Peninsular Malaysia, and by about 17% for Sabah and Labuan starting January 1st, 2014 as shown in Table 2 (Shagar, 2013). This is in line with the Government’s effort towards gradually reducing energy subsidies to industries through the Subsidy Rationalisation Program.

Table 2: The table on implications of the revised rate on domestic users

It is pretty clear that the cost of living in Malaysia is going to rise substantially as we stepped into 2014. According to Alliance Financial Group Bhd. and Malaysian Rating Corp., the 14 percent increase in sugar cost starting in October 2013 and 11 percent increase of petrol in September 2014 as well as 15 percent increase of electricity in January 2014 could inhibit private consumption growth by 0.9 percentage point in 2014 (Chong, 2014). Chong (2014) anticipates that Malaysia’s middle class is harshly hit by the price increases with elevated household borrowings as slower pay increase than the lower-income earners. According to Wan Saiful Wan Jan, the chief officer at the Institute for Democracy and Economic Affairs, with as little as RM 3,000 salary per month, the middle-income earners or the ‘Sandwich Class’ is not benefitting as much as other higher and lower classes from the government income tax cuts (Chong, 2014).

Despite the increase cost of living, the Malaysian Employers Federation estimates that there will be lower salary increases as well as bonuses in the private sector in 2014, where executives will get a 5.63 percent average increase in salaries and non-executives will get a 5.65 percent raise as the results of an MEF survey of 257 companies (Choong, 2014). The producers are the ones that expected to gain much of the price hikes, especially for those who take advantage by their hidden charges through overprice selling of goods on consumers. However, Ministry of Domestic Trade, Co-operatives and Consumerism Ministry is taking serious actions to protect consumers’ rights. 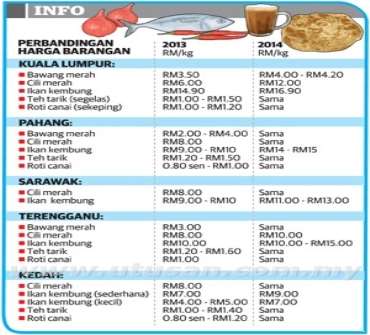 In many ways, Malaysia has been an early adopter of important financial reform programs. According to Shanmugam, the opposition has claimed that corruption and wastage are the main reasons the government is not able to spend within its means, thus increasing its spending that leads to high debt. Nevertheless, the technocrats in the Cabinet, Dato’ Seri Idris Jala and Dato’ Seri Abdul Wahid Omar say that Dato’ Seri Najib Razak’s administration has spelt out clear measures to tackle leakages in government spending and end corrupt practices.

One of the ways that is taken by the Malaysian government in bracing the price increases is by having agreement with the resources supplying countries. For example, the government is able to control sugar price because of its long-term agreement with Brazil in supplying raw sugar to Malaysia. Nevertheless, sugar is pressured by price hikes due to the usage of sugar canes as primary supplier of raw sugar in biofuel (Department of Information, 2008). This causes sugar canes for the use of biofuel having high demand in the world market.

The government has also introduced the Outcome-Based Budgeting (OBB) which is also known as Performance-Based Budgeting in Budget 2014 as a way to allocate resources based on achieving agreed upon objectives, program goals and measured results. This will help in improving the implementation of efficiencies, reducing redundancy and systematically evaluate the performance of all ministries.

Furthermore, according to Dato’ Seri Abdul Wahid, the government is now more focusing on public-private partnerships, where the private sector implements the projects and end-users pay for it. He said that “there will be less emphasis on private finance initiatives (FPI) where the government has to pay annual lease payments, which contribute to a growing operating budget” (Shanmugam, 2013).

Goods and Services Tax (GST) is a broad based consumption tax which will generally be applicable on all goods and services, where consumers pay only on what they consume. Any registered business that charges GST can offset the GST it pays against the tax it collects before forwarding the balance to the government, so that the tax is ensured to be imposed only once. This is called as an “input tax credit mechanism”, where businesses are able to operate without tax cost and the final 6% tax is borne by the end consumer (Kumaran and Simpson, 2013). However, basic goods such as unprocessed meat, cooking oil, and sugar as well as public services like education, healthcare, tolls, financial services and life insurance will be exempt from GST (Kumaran and Simpson, 2013). This will help Malaysians in curbing their expenses with the increasing living cost. 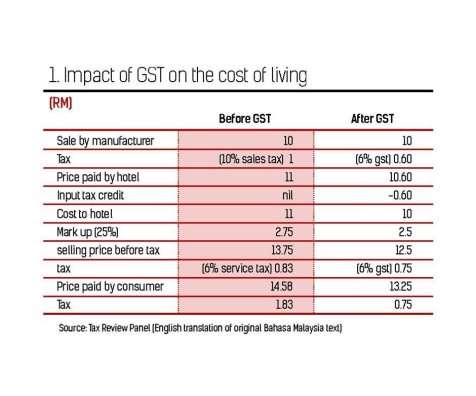 Furthermore, under the Price Control and Anti-Profiteering Act 2010, it is illegal for businesses to increase prices by 4% across the board with the introduction of GST (Kumaran and Simpson, 2013). Pricing decisions by businesses are also obliged to be justifiable or else stringent penalties will be taken by domestic trade cooperatives and consumerism ministry. In brief, instead of making everything more expensive in addition to international price hikes, GST is going to help Malaysians by providing a more transparent, streamlined and fairer tax based on our consumption patterns (Kumaran and Simpson, 2013).

In conclusion, despite the drawbacks of price hike to the cost of living particularly in the Malaysian context, price hikes are seen as a good cause in reducing the government’s burden. The government does need to reduce its fiscal deficit for the long term economic wellbeing. Therefore, cuts in government subsidies executed by the Malaysian government are viewed as a rational approach. Based on the blueprint discussed in this essay, it shows that the government also has proposed some measures to curb the impacts of price hikes to consumers. The government and its people are supposed to be partners in their shared journey of development and progress, thus both parties have to play their parts in fiscal consolidation.

Organisation for Economic Co-operation and Development. (2011). The Effects of Oil Price Hikes on Economic Activity and Inflation. Economics Department Policy Note No. 4. OECD.