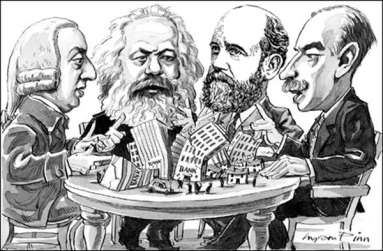 This paper is mainly focused on the changes happen in social structure resulting from interaction between ‘the relations of production’. It also contains some example where developing countries social structure can be see related to land and economy productions.

Third world or third world countries: they contains all of the developing and underdeveloped nations which are according to standard economic measures like GDP GNP etc.

Pre capitalist: in which capitalism has not yet been introduced; of or pertaining to a period before the introduction of capitalism.

In today’s world, politics and economics are inextricably interconnected, but what is the nature of this connectivity? What are the power relationships that shape the world economy today and create new challenges for international institutions facing globalization? What makes some countries wealthier than others? Do we face cultural diversity or fragmentation? Does the type of governance effect economic development and social change or is it the other way around? How do we measure it and how trustworthy is the data?

Political economy was the original term used for studying production and trade, and their relations with law, custom, and government, as well as with the distribution of national income and wealth. Political economy originated in moral philosophy. It was developed in the 18th century as the study of the economies of states, or polities, hence the term political economy.

Social interactions and relations with production:

Men engage in producing or procuring goods and services in order to support themselves; however, the framework within which they engage in such activities is provided by the society and polity they live in. one particular way of viewing social organisation is to regard it as consisting of several classes which are in fundamental conflict in respect of the rules governing distribution of goods and services. Like example, in a slave society, the interests of masters and slaves are in obvious conflict in normal times. It can be argued that man’s unceasing quest for earning a livelihood, can be hampered or encouraged by a particular kind of social organisation. For example, those latter-day Hindus who believed that crossing the ocean was a sin were allowing a particular belief associated with a particular social organisation to fetter their search for better sources of the goods they valued. In fact, one way of viewing social change is to regard it as resulting from interaction between ‘the relations of production’, that is, the relation between classes of men, grouped according to their relationships to the mean of production, and the ‘forces of production’ which define the limits of man’s power over the forces of nature in a particular society in a particular epoch.

We know the crumbling of all the formal empires controlled by Europeans or North Americans. The majority of the world population now belong to the so-called third world. This consists roughly of all those nations which are neither advanced capitalist nor affluent socialist. For understanding the development of third world countries, the delineation of non-capitalist modes of production and social formations is essential. For, at the time European merchant adventurers ‘Discovered’ the third world countries, the latter generally had not become capitalist and were not on the path of transition to capitalism. Furthermore, most of these societies evolved along paths that are recognizably different from the path of development of advanced capitalist countries such as Britain and France, or the USA and Canada. In their societies the property relations have not yet simplified themselves into those between capitalists and free wage earners alone, or even between capitalists, landlords and free wage earners. There are many segments of society with ties between people which are non-contractual in appearance and substance, and cannot be reduced to those simply between unattached buyers and sellers. It will thus be necessary to pay particular attention to pre-capitalist relation of production even when the dominant relations are capitalist in nature.

Western European Feudalism as a type of Pre-capitalist Social Formation:

At the core of the feudal economic system was the manor. The manor comprised mainly two types of land, one part cultivated by the lord of the manor directly, and another part cultivated by a class of dependant tenure- holders. The demesne was cultivated partly by the ‘prebenders’ or serfs attached to the lord’s household, and partly by the other bondsmen, who would fashion farming tools, weave cloth for the lord’s household and so on. The surplus received by the lord consisted of the surplus over the cost of cultivation of the demesne, taxes paid by the residents in the lord’s domain, and the procedure delivered by the tenure-holders. Not at all tenure-holders were bondsmen.

The extraction of the surplus under feudalism was direct – not mediated by the market mechanism, although rudimentary local markets and long distance trade existed throughout the period of feudalism and, in particular, gathered strength in which Bloch calls the second age of feudalism. Mughal India can be accommodated in the varying patterns of western European feudalism in its different phases of evolution and in the different areas under its sway.

In any case, the extraction of surplus in the form of rent in kind, performance of forced labour, and money rent on the basis of actual harvest rather than as a ground rent on the market value of land as under capitalism, were characteristic of both Rajput states and Mughal India. In many African polities, such as the kingdom of Bunyoro in western Uganda, the chief s enjoyed a considerable degree of autonomy in many respects and the ties of kinship, neighbourhood and communal organisation were quite strong. In China and Mughal India, on the other hand, bureaucracy and centralization had developed much further than in the classical period of western European feudalism.

While we shall bear these qualifications in mind, we shall sometimes use the word ‘feudalism’ to connote a society in which landlords dominate over dependent tenure holders and peasants, and in which the predominant method of coercion is direct legal control rather than indirect control through market forces. Many writers including Mao, have also used the term ‘semi-feudalism’ to denote a situation in which the non-market power of landlords (as employers of wage-labour), moneylenders and traders, and in which neither the peasantry nor the wag-earners are fully ‘free’ from various legal and customary disabilities.

Marx identified the second and the third forms with the ancient Roman and German forms of communal property, and the first form with the ‘Asiatic’ village community. Other commentators have also compared ‘village communities of the East and West’ and they have different greatly about the typical character of village communities as observed in eighteenth, nineteenth and twentieth centuries. The following characteristics seem to have been common to ‘village communities’ over most of pre-British and early Brutish India; the villagers were governed by local council, either a ‘Panchayat’ of all castes, or a panchayat of the major ‘clean’ castes, or a panchayat of most powerful castes. While some land was individually owned, there was also some common land. Furthermore, transfer of land through sale was restricted in various ways. For example, in Maharashtra under Maratha rule, the purchaser of land in a village had to have the consent of the village headman as well as all the cultivators who were recognized as having a stake in the village. Generally, the village or a group of villages had several artisan or service groups whose products or services were obtained by other villagers through a system of customary payments, including the right to enjoy the usufruct of certain specially allotted plots of land. In these transactions the landholding upper castes had the decisive voice. However, the village communities were not by any self-sufficient. They were involved in various cash transactions in buying salt, handicraft products, etc. from the outside world, and selling their grain and other crops which could be marketed outside the village or group of villages concerned. Furthermore, they had to pay taxes to the central or regional governments. Cash transactions were fairly common, though not very pervasive compared with the modern situation. Land transfer were also permissible, though certainly they were less frequent and more hedged about with customary restrictions than under British rule. For example, a landholder could rarely be sold up for realization of the debt of a moneylender, although his crops could be dis trained.

When the British tried to create full private property in land, most of the communal rights were gradually eroded. But some feature of the old community survived, although with gradually diminishing force, in the so-called jajmani system. Briefly, the jajmani system is a system of distribution in Indian villages whereby high-caste landowning families called jajimans are provided services and products by various lower castes such as carpenters, potters, blacksmiths, and water-carriers. In a rudimentary form, the jajmani system could be found also among the Muslims.

The Western European capitalism transformed the third world countries partly by interacting with, and partly by destroying, such structure. When we come to discuss the processes of change in Asia and Latin America, the modes of interaction and destruction will crop up extensively.

The division of the world into rich and poor nations, and the division within poor nations between a minority of rich people and a majority of poor people living at a minimum subsistence level, has been obvious to careful observers for a long time. It makes clear the historical origins of these contemporary problems, particularly with reference to the major countries of Asia and Latin America, and discusses the ways in which inequalities, both within and between countries, are perpetuated. The social structures in both rural and urban areas and their influence on the behaviour of governments and private investors in these countries; and there are many environmental control and population planning issues faced by these countries.

Marx’s ‘preface’ to A Contribution to the Critique of Political Economy, in Marx, 1859, pp.20- chapter 1