Keynesian Economics is an economics theory which developed by John Maynard Keynes, a British economist. Keynesian Economics’ theory was based on a circular flow of money, which refers to the idea that when spending increases in an economy, earnings also increase, which can lead to even more spending and earnings. Keynes’ ideas have spawned numerous interventionist economic policies during the Great Depression. Keynesian Economics’ supporter believes that it is the government’s job to smooth out the bumps in business cycle.

Normally, people’s natural reaction was to hoard their money when the Great Depression hit. Under Keynesian Economics, this stopped the circular flow of money and keeping the economy at a standstill. Keynes solution for this poor economic state was to “prime out pump”. Keynes argued that the government should increase their government expenditure or spending. As an example, increase the money supply in the market during the Great Depression.

The stock market crash led to a well-known Great Depression in 1930s, the whole world was mired in the deep and prolonged recession. British economist John Maynard Keynes believed that classical economic theory did not provide a way to end depressions.

The first step of the Keynesian revolution took place in the years 1936, which was the publication of Keynes’s General Theory of Employment, Interest and Money. The General Theory challenged the established classical economics introduced important concepts such as the consumption function, the multiplier, the marginal efficiency of capital, the principle of effective demand and liquidity preference. It saw the neoclassical understanding of employment replaced with Keynes’s view that demand, and not supply, is the main factor determining levels of employment. This provided Keynes and his supporters with a theoretical basis to argue that governments should intervene to soft the severe unemployment problem.

A central aspect of the Keynesian revolution was a change in theory concerning the factors determining employment levels in the overall economy. The classical economic framework which based on Say’s Law argued that unless special conditions prevailed the free market would naturally establish full employment equilibrium with no need for government intervention. However, Keynes declared that uncertainty caused individuals and businesses to stop spending and investing, therefore governments should increase spending and cut taxes to accelerate their economies. His idea led to an economic revolutionary.

Keynes recognized that his deficit spending solution to boost “effective demand” could explode the national debt and cause inflation in the future. But he thought the government could address these problems by increasing taxes once prosperity returned.

Keynes contended that monetary policy was powerless to boost the economy out of a depression because it depended on reducing interest rates, and in a depression interest rates were already close to zero. Increased government spending, on the other hand, would not only boost demand directly but would also set off a chain reaction of increased demand from workers and suppliers whose incomes had been increased by the government’s expenditure. Similarly, a tax cut would put more disposable income in the wallets of consumers, and that too would boost demand. Keynes contended, then, that the appropriate fiscal policy during periods of high unemployment was to run a budget deficit. These ideas had an enormous impact, however, on the field of macroeconomics after the war and, to some extent, on actual fiscal policy. Keynesian fiscal policy, the management of government spending and taxation with the objective of maintaining full employment, became the centrepiece of macroeconomics both in academic research and in the public debate over national policy.

In article “IMF Executive Board Concludes 2013 Article IV Consultation with Malaysia”, Malaysia’s growth moderated but still-vigorous consumption and in the face of much needed fiscal tightening in the second half of the year. Besides, Executive Directors noted that near term growth prospects for the Malaysian economy are favourable but exposed to risks from tighter global financial conditions and slower growth in major trading partners. This still required government intervention in order to solve the problem. Government intervention includes broaden the tax base, including through the planned introduction of the Goods and Services Tax (GST) and greater reliance on property taxes.

Keynes argued that the solution to stimulate economy through two approaches, the first is to increase the government spending and the second is to lower the taxes. Both work by increasing aggregate expenditure. When the contractionary fiscal policy, government decreases its expenditure or raises taxes. In the article, government broaden the tax base, including through the planned introduction of the Goods and Services Tax (GST) and greater reliance on property taxes. These reforms should help secure the sustainability of Malaysia’s public finances while promoting efficiency, equity, and growth objectives.

According to Keynes theory is a rejection of Say’s law to cutting the wages and priceswould cure recessions. If the wages and prices fall, it would make the economy spiral downward. Keynes argued that wages would be ‘sticky price’. The minimum wage law is a legal wage for low-skilled labour. Moreover, Keynes disputed that an increase in wages will lead the rise in consumption and decrease in saving.

Recalled that real GDP, this model can be divided by four components, investment (I), consumption (C), government (G) and export (X) minus import (m). The income- consumption model considers the relationship between expenditure and current real national income. The aggregate expenditure of this model equation is as follow:

Equilibrium real GDP is the level of output whose production will create total spending equal to total consumption.

The multiplier represent that an increase in investment can cause GDP change by a larger amount. Any increase in demand would lead to more people being employed. If more people were employed, then they would spend the extra earnings

The multiplier is defined as:

Does this Intervention Effective?

A long tradition in macroeconomics (including both Keynesian and monetarist perspectives) stresses that monetary policy affects employment and production in the short run because prices respond sluggishly to changes in the money supply. New classical economists criticized this tradition because it lacks a clear theoretical explanation for the sluggish behavior of prices. Much new Keynesian research attempts to remedy this oversight. In conclusion, Keynesian Economics does change over time.

Keynesian economics still has profound influence upon to the economic policies of various governments. Keynes opposed the classicist idea of free market that will lead the economic prosperity by using the aggregate demand that would lift a country out of recession and depression.

Nowadays, many countries have using the Keynesian economics by promoted their country in economic prosperity. According to Keynesian economics, the government has playing an active role in trying to shore up the economy depend on the price of the house that government increasing expenditure to build low-cost housing. Keynes has argued that the government has exceed spending by maintaining the growth of economy with full employment, effective wages, but with the side effect that it requires government spending to exceed its revenue. 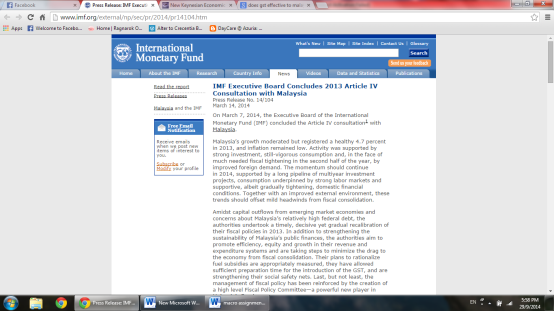