Background of the Recession

Events that Led to the Recession of 2008

Result of the Policies

Background of the Recession

The financial crisis of 2008 was one of the worst recessions in US history. The financial collapse saw the collapse of several large investment banks, bailouts of insolvent banks by the government and sharp declines in the stock market. These changes had far reaching global ramifications, and caused many other global economies to also suffer.[1]

The chain of events that led to recession began with the bursting of the US Mortgage Loan Bubble. This caused the Collateralized Debt Obligations (CDO) securities that were tied to the housing loans to fail. This in turn caused the financial institutions that were selling and insuring the CDO securities to fail, which led to a major credit crunch and loss of liquidity, which then affected other companies and that was reflected with a large decline in the stock market.

There were many factors, for example the overvaluation of sub-prime mortgages, poor trading practices of the underlying securities, and an over extension of financial credit, that were interspersed together to cause recession that caused a huge credit hole in the US financial system and a devastating ripple effect across the rest of the world.

Events that Led to the Recession of 2008

The events that led to the financial crisis of 2008 and the recession that followed could have its origins traced back to 2006-2007. The crisis began with the Sub-Prime Mortgage loans beginning to show defaults. By 2007 the number of mortgage defaults became substantial to the point that the Collateralized Mortgage Obligations (CMOs) securities were affected and not displaying the anticipated returns.

The CMOs were being bought and sold by major investment banks. As more and more mortgages began to default the investment banks and investors started to lose confidence in the security. This resulted in the value of these securities falling rapidly.

When more and more of the CMOs started to default the insurance contract between large investments and insurance providers came into effect. This put a large strain on the insurer to meet their obligations.

To make matters worse, the investment banks and insurance institutions were making use of very high leverage to make their purchases and open their positions and had very little liquidity to support their positions. Once the runs on CMOs and CDSs occurred the financial institutions were unable to cover their obligations leading them to bankruptcy.

This in turn affected the financial markets, as other financial institutions and investors lost trust in borrowers being able to meet their obligations and withheld their capital from investments, which led to a credit crunch on the market and the recession which followed.[2]

The Federal Reserve took very aggressive measures to prevent the financial crisis and recession from becoming as devastating as the Great Depression of 1930. There were two main objectives in mind for the monetary policies that were put in place at the time:

There were several cases during the financial crisis that the Federal Bank had to go beyond the standard monetary policies and utilize the Emergency Authority under the Federal Reserve Act of 1913 to introduce financial assistance programs to assist in managing the recession. 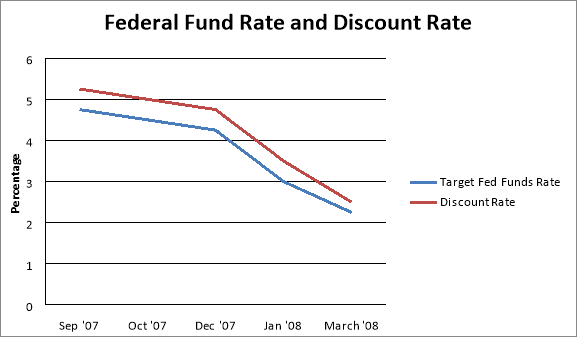 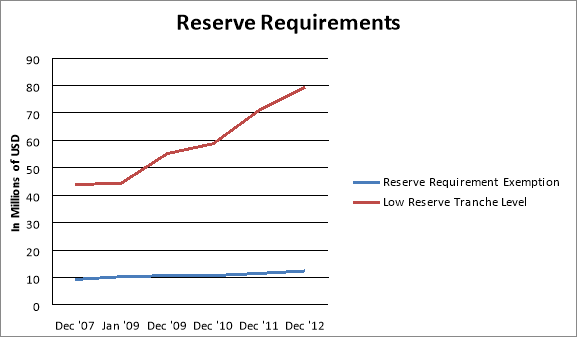 The Federal Bank continuously revised its Reserve Requirement Exemption allowing for larger amounts of deposits to be held by banks without having to hold a reserve. Simultaneously the Federal Bank also increased the Low Reserve Tranche Level thereby allowing more banks to fall under the category of requiring only 3% of their deposits to be held in reserves as compared to 10% for those exceeding the Low Reserve Tranche Level. By taking these actions the Federal Reserve increased the money supply.

Below is a graph detailing the amount of additional money supply that was created with the adjustments of the Reserve Requirements. 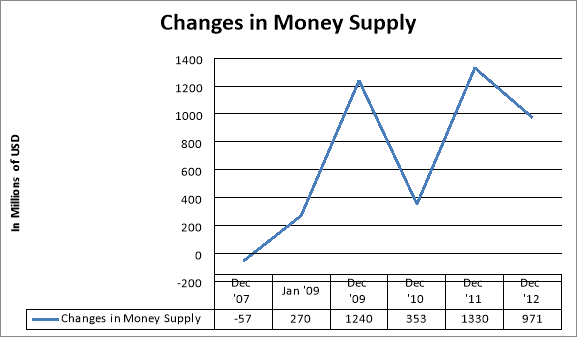 Result of the Policies

The expectation of reducing the Discount Rate was to increase the liquidity and money supply into financial institutions and into the financial markets. However, these measures proved to be inadequate in slowing down the recession as investor sentiment was still very negative.

The Federal Bank went on to modify the Reserve Requirement level for financial institutions by increasing the Minimum Deposit Level and increasing the Low Reserve Tranche Level the Federal Reserve was able to increase the money supply in the market by 4.164 Trillion USD.

The effects of these policy changes can be seen on the US GDP for this time period. Below is a graph showing the GDP Growth Rate Percentage from the time period of the year 2000 to the year 2012. 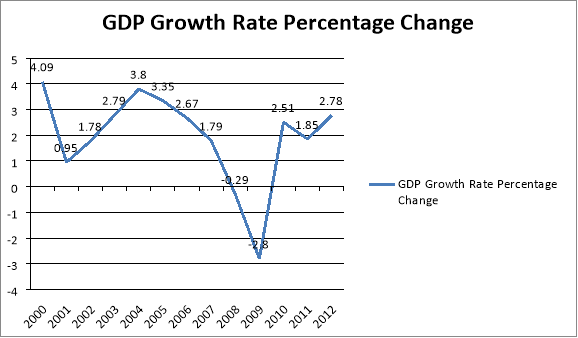 It can be seen from the graph above that the GDP growth rate began to decline in 2005 with the defaults of the Sub-Prime Mortgage Loans. This decline which also then led to the collapse of several financial institutions and money markets quickly led to spiral of lower and lower GDP Growth Rates, until 2008 reaching its lowest point at -2.8%.

The measures taken by the Federal Reserve seems to have quickly taken affect after 2008 with the GDP seeing a marked improvement jumping to a 2.51% GDP Growth Rate and thereafter the signs of recovery are far more prominent.