Question 1: Sketch the following cost curves and discuss the reasons for the shapes of the curves 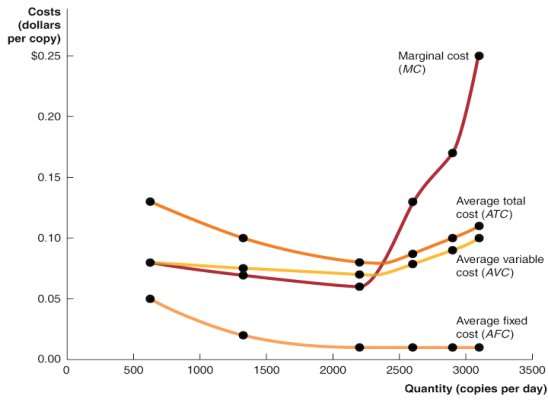 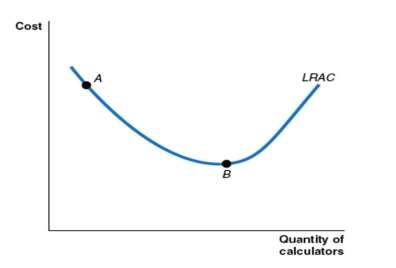 There are 3 key facts to understand to graphs those curves

For both perfect competition and monopolistic competition discuss with the use of diagrams, how profits are determined in the short-run and the long run. Outline the reasons for these outcomes

1/ Many buyers and sellers

3/ No barriers to new firms entering the market.

According to the graph above can give the conclusion in perfectly market competition, a firm maximize profit at the level of output at which marginal revenue equal to marginal cost. The difference between price and average total cost equal profit per unit of output. However, economic profit in a perfectly competitive industry is only a short run occurrence. As long as price is above average variable cost the firm will continue to produce in the short run, even they suffering losses. But it the price fall below the average variable cost the firm will shuts down, and the cannot suffering losses in long term.

In the long run, a perfectly competitive market will supply whatever amount of a good consumers demand at a price determined by the minimum point on the typical firm’s average total cost curve

The long-run supply curve in a perfectly competitive industry 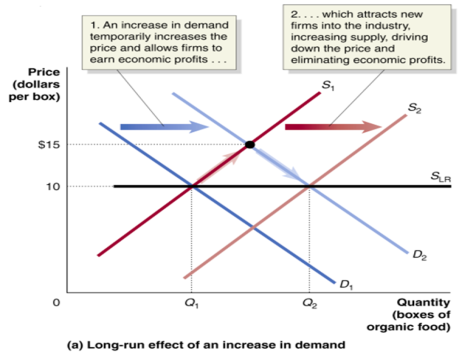 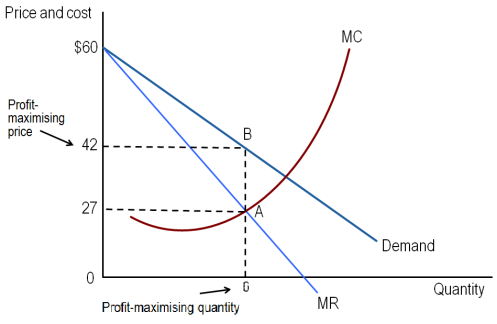 This graph showing the green box represents Austar profit by selling six subscriptions per month and charging a price of $42 minus the average total cost of $30 and the base equal to the quantity of six subscriptions. Austar’s profit there for equal $12 x 6 =$72

Even though Austar is earning economies profits new firms will not enter the market. Because Austar has a monopoly it will not face competition from other firm. Therefore, if other factors remain unchanged, Austar will be able to continue to earn economic profits, even in the long run.

In what ways could a monopoly be (a) more efficient (b) less efficient than several firms competing against each other? Discuss this statement with the use of appropriate diag

The effect of monopoly as follows:

A monopoly would be more efficient when it produce less and charge higher price than would a perfectly competitive industry producing the same good. This means that monopoly leads to allocative inefficiency that occurs when production reflects consumer preferences, and in particular production continues to pount where the price paid is equal to the marginal cost of production. Unlike perfect competition, a monopoly restricts output levels and charges a price higher than marginal cost. 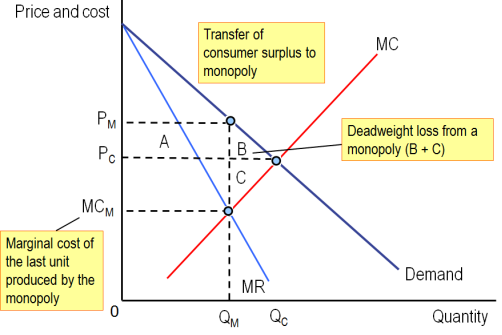 Many firm, though, have market power which is ability of a firm to charge a price greater than marginal cost. The only firm that do not have market power are firm in perfectly competitive market, who must charge a price equal to marginal cost. Because few markets are perfectly competitive, some loss of economic efficiency occurs in the market for nearly every good and service. The closer price is to marginal cost the smaller the size of the deadweight loss. This is one of the main reasons why governments of market economies usually have policies promoting competition in the market.

The federal government has formed the ACCC to regulate business mergers because it knows that if firms agin market power by merging, they may use that market powerto raise prices and reduce output. The governmant is concerned with horizontal mergers or mergers between firms in the same industry. Vertical mergers which are merges between firms at dfferent stages of production of a good. As we seen in the graph above, it’s a result of this merger prices will rise and ouput will fall, leading to a decline in consumer surplus and economic efficiency. 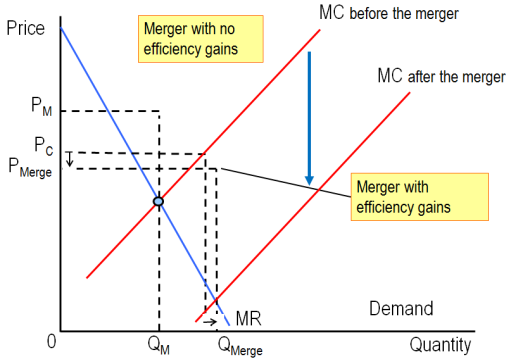 In this graph the price declines after the merge from Pc to Pmerge and quantity increase from Qc to Qmerge. This lead to the following seemingly paradosical result: although the newly merged firm has a great deal of market power, because it is more efficient consumers are better off and economic efficiency is improved. Even if merged frim is more efficient and has lower costs, this may not offset the increased market power of the firm enouggh to increase consumer surplus and economic efficiency.

In the long run, the owners of the monopoly will not continue in business if they are experiencing losses, government regulatord set a price equal to average total cost.