By using statistical tool to measure achievement of social and economic dimensions for Malaysia and other country based 4 category which is life expectancy at birth, expected years of schooling, mean years of schooling and Gross National Income (GNI) per capita in $USD. Besides, to determine Malaysia is under which category of human development countries.

Definition of Human Development Index (HDI) in the Human Development Repost 2013 – The Rice of the South: Human progress in a Diverse World is a composite index measuring average achievement in three basic dimensions of human development – a long and healthy life, knowledge and decent standard of living.

The original HDI is based on three target of development. First is longevity as measured by life expectancy at birth. Second, standard of living as measured by real per capita gross domestic product for each countries. Last is knowledge. Knowledge measured by two -thirds a weighted average of adult literacy and one-thirds of gross school enrollments.

Income index is to measured standard of living and it take by the real capita gross domestic product adjusted for the differing perchasing power parity of each country’s currency to reflect cost of living and for the assumption of diminishing marginal utility of income.

Education index is to measured knowledge.It take two -thirds a weihted average of adult literacy and one-thirds of gross school enrollment which is take persentage for one country’s primary, secondary, and tertiary age population are enrolled in school.

The NHDI still is based on three components to determine the level of human development which is life expectancy at birth, income index and education index .

Income index is measured by the gross national income (GNI) per capita for each country. Aggregate income of an economy generated by its production, less the income paid for the use of factors of production owned by the rest of the world, converted to international dollars using purchasing power parity (PPP) rates, divided by midyear population.

Example of Computing the NHDI : The case of Singapore

In the Human Development Report 2013 : The rise of the South : Human progress in a diverse world. Singapore is under the Very high human development category and the rank is 18 in the world. 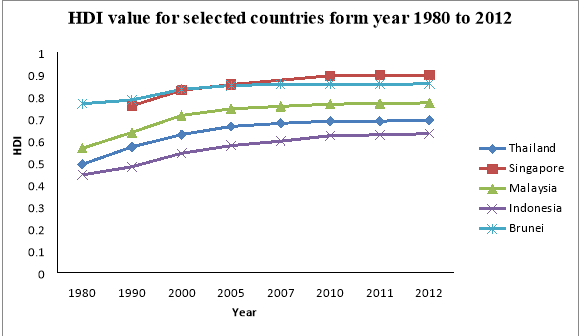 On the other hand, Mozambique got the lowest HDI value only 0.327 at the year 2012. The Life expectancy at birth is just 50.7 years. The mean of schooling is only 1.2 years and expected of schooling just 9.2 years. Mozambique’s Gross national income per capita was bellow $USD 1000 which only $USD 906.

In conclusion, although Malaysia is not in the category of very high human development, however from all the aspect in the research showed that Malaysia’ data is still batter compare to the average of East Asia and the Pacific and the average of all countries in the world. The government can do some policy to increases the value of HDI so that Malaysia can become the develop country in future soon.