Causes of Low in Oil Price

Malaysia is become a net importer of oil since 2011. The volume of exported oil is still less than the volume imported oil for local consumption (V, 2014). Malaysia continue to be net exporters of Liquefied Natural Gas (LNG) products. When taken together with LNG only can say that Malaysia is a net exporter of oil and gas. The figure 1 below shown Malaysia oil production versus consumption between years 2008 to 2013. 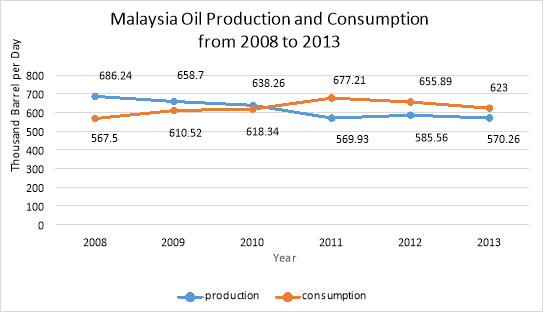 Causes of Low in Oil Price

The crude oil price has continuing to decline from US$ 115 a barrel in June of 2014 to around US$50 recently.The price of oil has thus fallen by approximately 50 per cent. The Figure 2 below shown the brent crude oil price changed since year 2014. 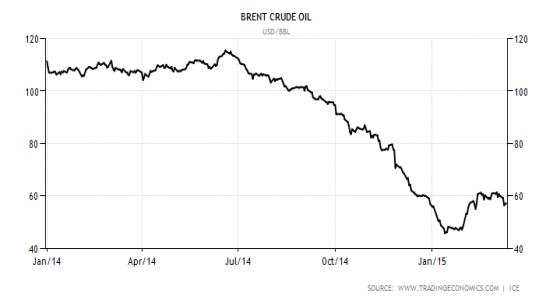 Oil prices fell sharply to their lower due to the production war between Organization of the Petroleum Exporting Countries (OPEC) and the United States (US) oil boom from shale oil producers. From mid of 2014, the United States has become a main producer of shale oil and gas. One of the main drivers of lower oil prices is gas and oil is extracted from shale formations using hydraulic fracturing or fracking. (Bowler, 2015)

When oil prices began falling from second half of 2014, many expected OPEC to reduce production to support prices. Instead, OPEC’s decision to maintain output levels at 30 million barrels per day signalled a significant change in the cartel’s policy objectives from targeting an oil price band to maintain market share. This decision may cause to weak global demand and strong supply.

The lower oil price effect Malaysia’s petrol price fall. Starting from 1st December 2014, Malaysia’s subsidies of RON95 petrol and diesel were eliminated and set the petrol prices are now based on a managed float system. (Lee, 2014)

In fact, the direct beneficiaries of lower oil price are broadly, the transport and utilities sectors. The consumer sector benefits indirectly.

The airline companies will be main beneficiaries of the fall in oil prices, as fuel costs account for approximately 50% of the airline sector’s total cost. Given that airline margins are meagre at the moment, the reduction in fuel cost will have a significant positive impact on earnings. However, in view of the intense competition within the industry currently, certain airlines company will decide to reduce fuel surcharges or ticket prices benefits to passengers.

For example, AirAsia removes fuel surcharges and reducing travel costs due to lower oil price. They believe that removes fuel surcharges and reducing travel costs not only benefit to passengers and also huge boost to the tourism industry. (B.K.SIDHU, SIVANANDAM, ZAINAL, & CHEAH, 2015) In 2008, AirAsia removed the fuel surcharge for all of its flights, but restored it in 2011 due to fuel prices rose sharply. According to AmResearch aviation analyst, every US$1 per barrel fall in jet fuel impacts AirAsia’s earnings by 2.4% in FY15. (TAN, 2014)

Lower oil price benefit to consumer spending. Consumers can spend more on other goods and services due to the increase in disposable income and lower logistics costs from reduce fuel costs. Some of consumers likely spending on imported goods, but much will benefit local businesses.

Consumers spending will effect on economic growth but depend on whether consumers decide to save or spend the windfall. Normally households with high debts might be inclined to use disposable incomes to pay down debt rather than increase their spending. (Walker, 2015)

The sectors that will be negatively affected by the falling oil price are oil & gas sectors, as well as plantations to a certain extent.

Normally oil majors cut back on exploration and production (E&P) activities when oil prices are low. Oil price should have a laggard impact on oil service companies. According toThe Star, thePetrol Dealers Association of Malaysia(PDAM) have said that prices continue to fall will lead to many of fuel dealers around the nation may have to shut down should due to high losses.

President of the Petronas Petrol Dealers Association of Malaysia, Datuk Abu Samah Bachik, has said that they were not only affected from this, but also all dealers in the country are affected.”

Because of petrol and diesel being considered as necessity items, dealers are required to possess at least three days’ worth of stock. Normally motorists waiting out from refuelling until after the new price is introduced.

President of PDAM, Datuk Hashim Othman has said that some oil stations do run out of fuel because nobody are buying before the end of the month. But when the oil price fall, everyone rushes to buy.

President of PDAM stated that if the drop was only a few sen, they could absorb the losses but drop with the 35 sen of petrol, they are buying it high and selling it low. Several dealers were losses of between RM20 thousand and RM100 thousand in petrol price fall. (Sze, 2015) 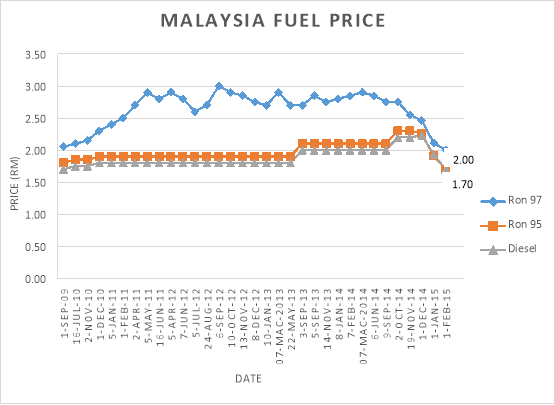 The lower oil price reduces the economic viability of biodiesel. It may result in higher crude palm oil inventories. The decline in crude oil prices erodes the economic viability of converting crude palm oil (CPO) to biodiesel. At oil price of US$90/barrel, we estimate the CPO breakeven price of RM2,080 per tonne, which is lower than current CPO spot price of RM2,182 per tonne. If this situation continue to exist, it may lower demand for CPO over time for biodiesel usage resulting in higher inventories. Based on CIMB analysis, every US$10/barrel change in crude oil price, will lower the CPO breakeven price by approximate RM240 per tonne. (GOH & SHARMA, 2014)

However, the production of biodiesel could be negatively affected by lower crude oil prices. If this condition persists, the low crude oil prices would threaten the economic viability of producing biodiesel.

Besides, Malaysia has sizable oil-substitute industries such as the palm oil and Para rubber industries, with the latter accounting for almost 30% of total world production. Lower palm oil and rubber prices are expected to lead to weak domestic demand. (CENTER, 2015)

From the report, we can see that the changes of oil price will also causes Malaysia some problem. Oil price dropping has drastically affects Malaysia’s economy. Malaysia is a major oil exporter country, thus the reduction of oil price have causes an economy crisis. Although Malaysia did enjoy some benefit from oil price slump, for example, lower inflation, lower costs for business, higher spending power for households (Walker, 2015). Malaysia has been importing oil more than exporting it, Malaysia are still suffering from losses because Malaysia is an oil exporter country, and most importantly Malaysia owned Petronas, when oil prices drop, the income for Malaysia also decrease which will affect the economy status of Malaysia. According to Bloomberg, Petronas has suffered a RM9.9 billion loss on oil slump (Bloomberg, 2015).

In conclusion, there are lot more winner than loser for oil price slump, but it will not just affect the industry that needed petroleum. It also did affect Malaysia as it is a fuel exporting country. However, the effect that hit Malaysia will not be as huge as those oil major exporting country like Iraq, Iran, Russia, Nigeria, and Venezuela since Malaysia are importing more oil than exporting it and oil price slump still can be handle as long as preparation have been done early.