A Case Study of India

Industrialization as an Engine of Economic Growth: Literature Review

Industrialization and its significance have been discussed by various scholars since the Industrial Revolution. While the debate has been taken to various fields of study, it is frequently mentioned in Economics to discuss the structural changes and the resultant economic effects it has caused. A large pool of literature has consensus over the stance that Industrialization is critical for development. Various scholars tend to prove their stance with the help of empirical analysis carried out in both developed and developing country. The core model supporting this stance was introduced by Arthur Lewis in 1950s in which explains why economies should shift from agricultural base to an industrial base. Lewis presented his theory of “Development with Unlimited Supplies of Labor” and claimed that as the agricultural sector of the economy experiences labor surplus and low productivity, an economy should shift these surpluses to the industrial sector (Ranis, 2004). The growing manufacturing sector of the economy will tend to offer higher wages to the unemployed to provide them with an incentive to shift towards the manufacturing sector as well as to compensate them for the expenditures of moving to urban areas. Thus, the resultant increase in productivity and capital accumulation will lead to growth of industrial sector and this will generate sufficient employment opportunities to absorb unemployment in other sectors of the economy (Guru, 2016). Lewis’s model however, assumes that all the wages provided are used up and all the profit earned is reinvested. Thus, this would lead to expansion of the industrial sector. Conclusively, saving and investments as a ratio of national income in an economy will tend to rise, leading to growth and development in an economy (Guru, 2016).

Lewis aims to directly address the issue of development through proposing the expansion of industrial sector. However, the theory is subject to various loopholes. Lewis’s model is criticized for ignoring the surplus absorption capacity of the agriculture sector. Guru (2016) argues that developing nations like China and Bangladesh have an increasing population rate so the shift of labour from agriculture to manufacturing or “smaller fraction of total population being employed in agriculture” is difficult in labour surplus economies. Hence, development of agrarian sector through capital accumulation, reforms and technological advancement will generate opportunities within the sector to absorb any surpluses (Guru, 2016). Criticism however, still fails to undermine the contribution of the Lewis Model in Development Economics. Industrialization still tends to be the key towards development in various economies of the world.

Advocates of the aforementioned argument also tend to support their stance by examining the impact of industrialization on poverty and income inequality through empirical analysis. Bourguignon & Morrison (1998), identified removal of trade protection in manufacturing sector as the reason for reduction in the income of the richest 20 percent and increse in the income of poorest 60 percent, in 35 developing countries of the world. Likewise, Dollar & Kraay (2004) found a strong correlation between variations in trade volumes and, growth and inequality. This can be explained such that as the manufacturing sector imrpoves it production volumes, it earns more which can be reinvested. Reinvestment leads to better incomes and employment opportunities for the poor bridging the inequality and making poor better off.

Opposing school of thought however have been trying to reinstate the importance of agricultural sector in the economies. An empirical study by Awokuse (2009) suggests that agriculture is a driver of economic growth such that agricultural produce leads to trade openess which has positive impact on GDP per capital. Thus, Awokuse (2009) argues that resource allocation and infrasturcture development should be carried out targeting agricultural improvements in an economy. Similarly, opposing school also favour the development of tertiary sector in order to undermine the importance of secondary sector in the economy. Park & Noland (2013) argue that service sector can serve as the new engine of economic growth in an economy specifically in asian economies, as an analysis of 12 asian economies already indicated that service sector has contributed to the growth of the economies in the past (Park & Noland, 2013).

However, Szirmai & Verspagen (2010) rule out their findings and claim that manufacturing sector is still important than any other sector in a country in the contemporary era. His empirical findings were inline with the engine of growth hypothesis and illustrate that manufacturing sector has the biggest share in the economic growth of a country and this impact is more prominent in poorer economies. Conclusively, majority of the scholarly pool of knowledeg supports the fact that countries shall inustrialise in order to develop.

Industrialisation and Development in India

South-Asian countries have been traditionally known to be export oriented particulrary in manufacturing products. Most of the Asian economies have been known for shifting from agrarian base to industrial base in order to develop. This has been inevitably true in the case of China, India, Bangladesh, Pakistan etc. India however, has been known for its strong industrial base and its Industrialisation led strategy of development and economic growth.

Since India’s adoption of liberalisation policy in 1991, multiple opportunities for investment have attracted various foreign investors. The government ensured that projects were approved quickly and moreover 34 industrial sectors were allowed automatic approval of projects. The investment was focused on the industrial sector and thus, has majorly contributed towards manufacturing sector growth. There was also relaxation in the percentage of ownership to be held by foreign actors. This led to various industrial project initiation in the sectors like automobiles, infrastructure, computer softwares etc. India’s liberalization policy had been so successful that its Foreign Direct Investment (FDI) climbed up from being $170 million during 1991-1992 to $1.3 billion in 1994-1995. Since the last century India has been attracting $10 billion of FDI annually, most of which are for industrial projects. Hence, India;s FDI is approximately 25 times more than what it was before adoption of liberation policy (Hambrock & Hauptmann, 1999).

Undoubtedly, India’s liberalization policy led to a major structural shift in the economy. The role of Industrial sector in the economy was enhanced and it ultimately led to development and economic growth. Kniivila (2007) reports that India has undertaken huge structural change since the last 40 years where the contribution of agriculture value added to GDP has gone down from being 45% in 1965 to 19% in 2005. Despite of this, the overall growth rates in the economy have risen mainly attributing to the growth in manufacturing sector. The growth rate of manufaturing industry value added averaged at 6.6% between 1980 and 2002 while the growth in agriculture was just 2.8% (Kniivila, 2007). Thus, this growth has brought various benefits to the country. The most evident trend in India has been the increase in trade flows. During the period 1991-2002, India’s gross trade flows trippled with trade-GDP ration rising from 21.3% to 33.1%. A major contributor to this was merchandise exports that grew by 145% (Kelkar, 2004). Manufacturing sector has a major proportion in the merchandise exports of the country. While it accounted for 43% of merchandise export in 1962, it trippled by 2003 (Figure 1). 11% of the total merchandise exports consisted of food exports in 2003. Other important manufacturings included textiles, clothing, gems, chemicals, drugs and dyes and automobile components (Kelkar, 2004). Thus, since the liberalization policy, he industrial portfolio of India has not only widened but has also brought about spill over benefit for the economy by improving the wages of basic level employees and increasign the national income through volumnous trading.

While the industrialization process has improved economic growth in India, it simultaneously reduced the risk of growth volatility such that since 1980s the standard deviation of GDP growth has fallen down to 1.9% (Kelkar, 2004). An important reason for this is the rise of industries and decrease in the contribution of agriculture sector in national income. While Industrialisation has developed the national economy of India, it has also served to improve the living standards of the population addressing the issues faced by the poor population. Since the structural shift towards Industrialisation, the Indian government reports that the employmnet rates have gone up and the percentage of poor in the total population of the country as falledn from 45.7% in 1983 to 27.1% in 2000 in rural areas whereas it has fallen from 40.8% to 23.6% in urban areas. Overall, the poverty line of the country declined from 44.5% to 26.1%, which can mainly be attributed to the better earnings and living standards of the poor resulting in better welfare for them. According to Mishra & Kumar (2005), trade liberalization resulting in enhacement of industrial sector has decreased wage inequality in manufacturing. Sectors marked by tarriff reductions experienced wage increments. Because mostly the tarrif reductions were imposed in sectors with great number of unskilled labor, these sectors were marked by increasing wages an thus, it led to increase in inome levels of poor unskilled labour (Mishra & Kumar, 2005).

However, a significant loophole of liberalisation policy in India has been its biasness in implementation. It is to be noted that reforms for the manufacturing sector depended upon their location and level of technological advancement. While liberalization attempted to inroduce innovation and growth in industries, it mainly trageted industries with scope in technological advancement. Moreover, some industries that were labour intensive were prevented from introduction of innovation so that it does not lead to unemployment. This, restricted te spill over effects of industrialization in some areas and hence led to inequality. However, at large industrialization prominently improves the economic conditions of India.

Conclusively, we have established that Industrialization and Manufacturing sector growth is the ultimate engine of economic growth. It helps in curbing inequalities by improving the wages of the poor unskilled labor force and also tends to improve the trade volume of the economy. This has been inevitable in the case of India. Post-Liberalization manufacturing sector development has brought about major benefits for India. Industrialization has resulted in consistent growth, increase in productivity and exports, and reduced level of poverty. This has certainly led to development at a phenomenal rate in India. Hence, Industrialization has served as the driver of economic growth in India, being in line with the Lewis Model. This has not only been proved theoretically but also empirically by Chakarvarty & Mitra (2009) and Kathuria, et al., (2013). A few development challenges still faced by India attribute to the loopholes in the legal and justice system, and massive regulations in the labor market. However, Industrialization has seemingly solved most of the development challenges in India. 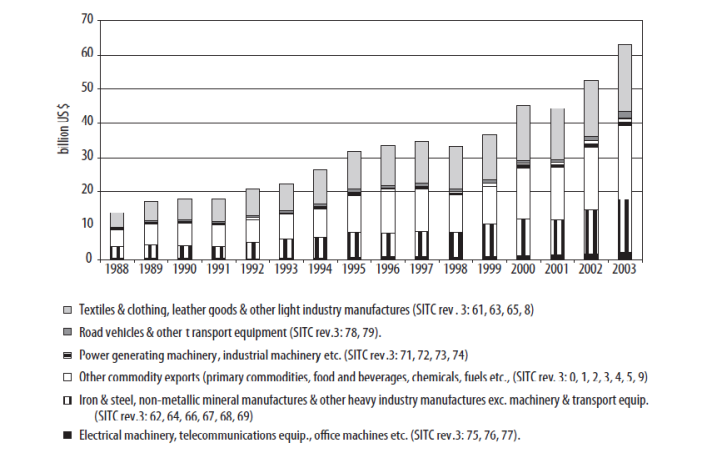 Szirmai, A. & Verspagen, B., 2010. Is Manufacturing Still an Engine of Growth in Developing Countries?, s.l.: The International Association for Research in Income and Wealth.