Manufacturing in India: MAKE IN INDIA

Historically, India has always been an agricultural nation. The major share of GDP was from this sector till the early 1950s and 60s. Down the line, its share began to decline and service sector started to emerge. Today, service sector plays a prominent role in the economy of India. On the other hand, industrial sector has been growing right from the beginning but the growth is not as consistent as that of service sector. This raises the question that India, in spite of having a huge population and demand, lags behind in the manufacturing sector. As clearly seen from the graph, the representation of each sector in the GDP of the country; manufacturing doesn’t contribute heavily. 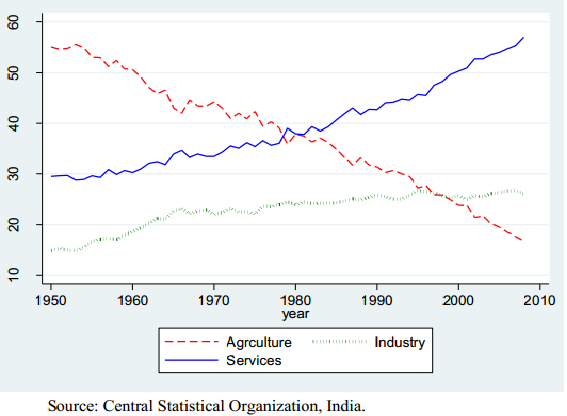 Figure 1: Shares of Agriculture, Industry and Services in India

Agricultural sector employs major workforce in India, but since it doesn’t require any specialization or expertise in doing that job it yields very low output. Agriculture contributes to about 17.4% of GDP and it employs about 49% of workforce. Services cannot include high workforce since it requires a specialized expertise in a specific field and due to various reasons, everyone doesn’t possess it. Manufacturing is in midway of agriculture and services and for a country with such high demographic dividend, it is manufacturing which can drive the economy and can employee labour force in huge number.

Thus, the research intends to identify the issues that hinder the role of manufacturing in the Indian Economy. The study will help quantify the factors and better judge their influence on each sector of the country. Furthermore, the study analysed the Make in India campaign’s offering to revive the industries in India.

Keeping all the above factors in mind, Make in India campaign looks optimistic. It makes sure that the issues in previous attempts of reviving manufacturing sector are not repeated. For this, the Make in India initiative looks to revive Indian Manufacturing sector holistically. It gives importance to SME’s(Small and Medium Size Enterprises), better infrastructure and better governance so as to have an inclusive growth. The contribution of Manufacturing Sector was consecutively 16% towards our GDP from 1980 to 1990 but the share had been 13% in the year 2013.

Consecutively the contribution of the service sector was 40% in the year 1980 which rose to 57% in 2013. The economy had significant growth post liberalization. Ray (2013) tried to understand whether the growth in the service sector had any influence on the growth of the manufacturing sector. For this he used the data from 1970-71 to 2009-10. He noted, “The results of co-integration test show that there is no long-term relationship between the growths in the two sectors.”

There are many issues plaguing the Indian economy where one of them happens to be corruption. An extensive work was done on this by Kato and Sato (2014) where they tried to investigate how corruption impacts the performance of manufacturing sector at the state level in India. The conclusion which they arrived at was that there is a reduction in gross value added per worker and total factor productivity. The paper also showed that the effects of corruption are more relevant in industries with smaller average firm size.

According to Kalirajan and Bhide(2004), Manufacturing was an engine of growth in the 1970s and 80s but this speed slowed down since the 1991 economic reform. According to them, the output growth of the manufacturing sector of India in the post reform period was input-driven rather than technology or efficiency driven.

Institution changes also played a large role in the manufacturing productivity, Pandey and Dong(2009) did a study on this vis-à-vis China where it was noted that the productivity of manufacturing industries in China improved rapidly between 1998-2003 in relation to India. The most important change noticed in China which wasn’t observed in India was in the fag end of the 1990s, when there was an enormous wave of ownership restructuring as the communist government of China had formally endorsed private property rights. To counter the long standing predicament of redundancy of labour in the public sector, which was about 30% of Total Factor Productivity, a large scale labour economising program was launched. 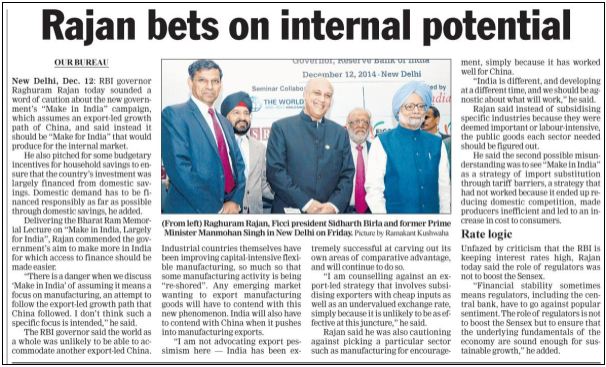 Raghuram Rajan has provided an insightful opinion, that China’s export – driven Manufacturing growth should not be focus of India. Rather, according to Rajan, catering to the internal domestic needs should be a priority, as the current volatile market trend may or may not respond positively to export – oriented industry. Thus, by focussing on inclusive growth, India should produce for internal market; which should be the government’s focus.

Based on the theories propounded, the implications and findings showed a solid framework about the Manufacturing Sector in India being not so independent but dependent on myriad factors. The study analysed these factors and present how the Government actually arrived at branding this as “Make in India”. Also, what all policies that are new or have been used in other economies can accelerate the manufacturing sector in India.

Upon closer introspection, there are numerous issues acting as bottlenecks for Indian Manufacturing Sector. The factors which are considered are as follows:

From the above sources, the study analysed the shortcomings prevalent in the Indian Manufacturing sector. The indicators which will be collected from these sources are labour utilization, labour productivity, per capita income, ease-of-business rankings, unemployment rate etc. With these parameters, the research would be assessing how the Make in India Campaign by the new government in India would affect the Indian Economy.

Currently India is placed at 134th rank compared to last year’s 131st in the “Ease of doing business Index” which is lower than its BRICS counterparts.

Land Acquisition happens to be a critical issue as most of the landowners are wary of selling their land because of potential future appreciation of price and lack of transparency in benchmarks. As per a survey conducted by KPMG-CII, on an average the time to acquire land is 14 months and the number of departments to be visited makes the land acquisition much more complex.

The respondents of this survey identified certain key initiatives taken in certain states such as CARD in AP, SIR, GIDC and e-Dhara Bhulekh in Gujarat, KAVERI and KIADB in Karnataka etc. In Tamil Nadu an industrial cluster was formed to take care of such hindrances. The critical enablers noticed in these initiatives were technology, regulatory bodies and policies.

The research recommendation would be to simplify the land acquisition process as well as the bureaucratic hurdles. E-procedures can help improve all these since it curbs unethical practices and streamlines the process flow. As observed, promoting industrial clusters where state governments can be included in making the required policy where the cluster may highlight the specialisation factor of the state concerned. The Right to Fair Compensation and Transparency in Land Acquisition, Rehabilitation and Resettlement Act, 2013 was a major concern for the landowners as they felt that the compensation received under the guidelines of this act was less than what the market rate was fetching them. Instead of actually buying the land from them it could be leased out from them on a long term basis.

But it is not just approvals but even the infrastructure is a key concern, be it obtaining power connections or water sewerage approvals.

The recommendations would be to implement a “Bizfile” kind of system, like the one that is prevalent in Singapore where the filing and information retrieval takes place on an internet based online portal which enables individuals to register businesses on their own. The Government should improve the single window clearance, relax environment related clearances, introduce a flexible labour policy, improve labour skill development and channelize NREGA funds for skill building and enhancing employability.

The bellwether of Indian economy happens to be the IT industry and a general perception is to give a tax holiday to this industry to continue its growth trajectory. The complex taxation regime with respect to use of passive infrastructure, management services needs to be simplified. With respect to infrastructure the tax incentive regime should be investment linked rather than profit-linked.

Judiciary: Korea is a pioneer when it comes to using electronic features to streamline court processes, India should also adopt a similar platform.

But the main recommendation is to update certain antiquated laws such as Indian Contract Act, 1872, Indian Penal Code, 1860 etc. and doing away with the Wealth Tax Act, 1957.

As it is known, the Cobb Douglas Production function and how the Growth Accounting Equation is derived from it;

The Growth Accounting Equation being:

As can be observed see that labour capital is with us as the increase in the labour productivity from 1961-2004 has been approximately 2.4 time but what is required is capital, be it in the form of Foreign Direct Investment i.e. FDI or in the form of domestic production of capital. Hence the concept of Make in India arises. Regarding Total Factor Productivity (TFP) it is known that it is more concerned about how labour and capital interact with each other. 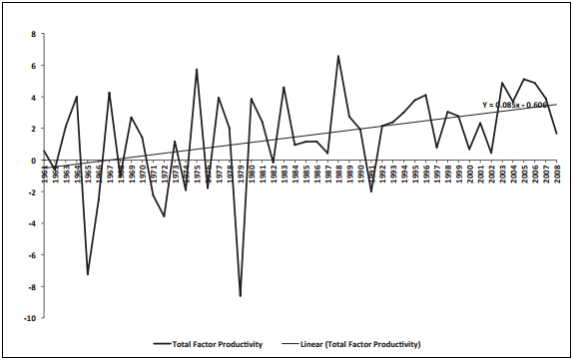 The major limitation is that too much emphasis is being laid on “Make in India”, but the fact is that the model which worked for China may not work for India as they were following a path of export oriented manufacturing but in India what is required is manufacturing for domestic consumption, but the world may not be ready for another China due to the global economy still being weak.