In the modern market system of economies in most countries income variations are common between citizens of the same country. At each point in time some individual households earn relatively less while others earn relatively more in the same economy and this result to the inequality in the distribution of national income and national wealth. There are various reasons for the existence of these variations and the negative impacts of the same. This paper tries to explain income distribution in Australia over the past 10 years, investigate the effects of income inequality in the country and the measures the government has taken to achieve an equal income distribution. The paper will use Gini coefficient and comparisons of incomes of households and individuals at different classes of income. The household income data used in this study will be those adjusted by the Australian Bureau of statistics to reflect the requirement of larger households having a higher level of income to achieve the same living standards.

An individual income is made up of labor incomes returns on investments and other capital gains. Generally the lower class of citizens in terms of income derive their income from labor earnings while the rich class have multiple sources of income, including labor earnings, incomes from investments and capital gains. The poor class earns little labor wages that are less elastic compared to the wealthy class of citizens whose incomes grow at big margins depending on their choices of investments and the career choices. This is a major factor that creates income inequality in economies as the wealthy class gains more from economic growth than the lower income class.

Australia has recorded sustained economic growth over the past twenty years. The results of this is the increased earnings not only on labor, but also the capital. This has benefited individuals and households across all income classes (Greenville et al. 2013). The lowest income earners who are the factory and mine workers have benefited from this too. According to the OECD, 2011, the bottom twenty percent of income distribution havereceived an income growth of 3%, which ranks at fifth highest income growth among the OECD. There has been the decline in labor income inequality, but still the overall income inequality has risen since the mid-90’s. The figure below shows the trends in income distribution in Australia from 1982 to 2012. 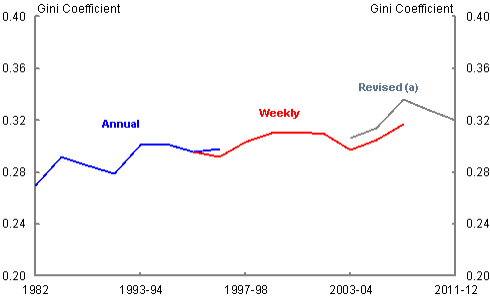 The blue line shows the annual measure of income by ABS while the other trends involve a weekly measure. The income definition varies in the different periods shown by the different lines. Our main focus is the grey line showing the trend in the last ten years. The chart shows a positive and a negative movement for the period 2003 to 2012. This is an indication that there has been a more equal distribution of overall income during the period shown in the graph. The graph, however suggests that the income inequality has risen compared to the previous periods. The graph is relatively higher that for the other from 1982 since the graph shows a maximum of 0.36 compared to the minimum of 0.87 in 1982. The graph also shows that income inequality rose to maximum during 2008 and 2009 falling later in 2011-2012. 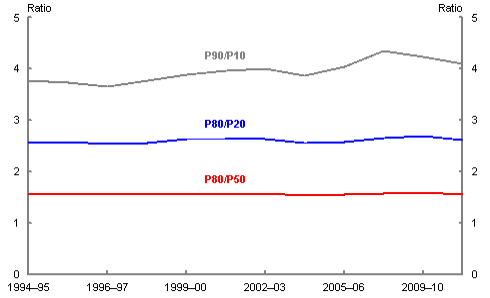 The trend in the above figure 2 is consistent with the trend shown in the figure 1. There is an increasing inequality between the highest income class and the bottom income class. The middle income ratio remains within the same range changing slightly. This suggests a possibility that the rising incomes may be due to rise in investment incomes which positively affect the wealthy investors to a greater extend, the middle, wealthy class to a lesser extent and the poor remain in the same position since they hold no capital investments.

Based on the above data, the overall income inequality has risen at slight rates as shown. The wage equality has, however fallen due to the wage increment in the lower income class according to the OECD, 2008. The charts above suggest a rise in the gap between the least earners and the wealth class by approximately 0.25 measured using Gini coefficients. However the middle inequality between the middle incomes stagnates around the same point at around 2.6 measured in gini coefficient. This indicates that income growth is at all levels of the income distribution. This is show on the graph below from the ABS. 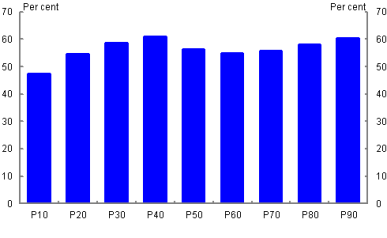 Figure 3 shows there was real income growth across the income distribution from 1994 to 2012 with some variations in the growth rate as shown in the graph. According to Greenville et al. (2013), the growth at the lower percentiles can be attributed to the growth in wages as a result of rising employment, more labour hours paid to employees and the growth in hourly wages. Ho continues to say that those on top percentiles have benefited from large investment returns.

Causes of income inequality in Australia

More growth in labor incomes at the top than the bottom

The overall labor incomes have grown as shown in the figure 3. However it can be seen from the same graph that the rate of growth in labor earnings is grater relative to the low income percentile. Normally most institutional policies provide for a progressive rise in earnings during wage increases just like government taxes. The higher wage class therefore ends up with higher wage increase rates compared to the low income class when wage increase happens across the income distribution. Politicians and policy makers in institutions and government are also in better position to alter their wages and prices of particular commodities in the market. This gives them the power to alter their payments to their advantage.

Most of the capital resources are held by those lying from the 40th percentile to the top. The bottom percentiles earn income from labor wages only since they control very few capital resources in their countries. Capital wealth tends to accumulate over time and thus the earnings from those resources grow. According to the ABS Household Expenditure survey, 64 percent of those in the 10th percentile of income receiving some capital income as part of their total income.

Direct taxes reduce the income inequality even the more. The progressive system of taxation reduces the huge wage earnings from the top percentiles more than the lower percentile class. Other statutory deductions from salaries also vary like the taxes and thus also tend to create more equality. However, Whiteford notes that there is a lesser impact of direct taxes in reducing inequality due to the falling share of taxes paid on income favoring the top earners more.

The five English speaking countries (Australia Included) have adopted rather dispersed wages. This implies dispersion of hourly earnings among full-time employment, part timers, unemployed and household formation. This has dispersed the labor earnings and the government transfers to the unemployed further reducing inequalities.

Income inequality is portrayed by many authors as a negative for economic growth and for the welfare of a country. It is not one of the features that any nation would wish to achieve in its economy for attainment of any goal. It is used can be used by economies positively but in a free economy income and wealthy inequality is unpleasant.

Some authors argue that inequality in income may lead to increased savings and increased investments as a result. The poor have e a high MPC and therefore marginal increase in income to the poor equal marginal increase to their spending unlike the wealthy that will save and invest. Arguing from this perspective income inequality is expected to yield economic growth to a country.

Inequalities in income and wealth makes the poor people live in extreme poor conditions while those possessing the national resources live lavish lives both in the same country. The unequal distribution between the poor and the rich trigger the illegal activities to acquire property from the rich. It results to theft if not becoming beggars. This is therefore a threat to nation’s security when the rich are not safe from the poor who become criminals.

Unequal distribution of income inhibits demand for the produced goods. The marginal propensity to consume is relatively low among the top income earners compared to people of limited means. When the marginal income to a country goes to those who are already rich at the expense of the poor, there is little additional demand. This may even result to inflation when the nation’s increased income is not matched with increased demand for the products within the economy.

Whiteford, P., 2006. ‘The Welfare Expenditure Debate: Economic Myths of the Left and the Right Revisited’, The Economic and Labour Relations Review, Sydney.