In this paper, I reinterpret the large literature on EU’s Great Depression. I argue that EU couldn’t discover its economic potential after 1918, because the war was still ongoing until 1945. Both institutions (international and domestic) suffered from mutual trust and commitments not being exist, monetary policy can be defined as its reason. These institutions in turn affected expectations and thereby the extent to which, for example, expansionary policies could be effective.

For some resources, The Great Depression defined as the most destructive international economic crisis in modern history, especially when its effect on manufacturing output and being the reason of its collapse and firing up the unemployment dynamite’s fuse. Also, recovering process from the Great Depression was really slow and it wasn’t even really universal. We can see its effect on manufacturing output in the US and most EU economies. 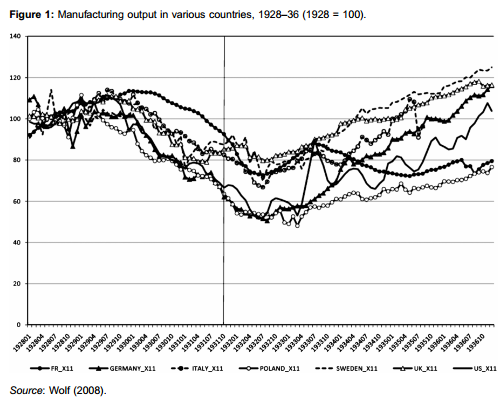 This paper’s purpose is to try to re-interpret the large literature that tried to explain how deep the crisis was and the delay of recovery process as a result of lack of economic policies coordination. I argue that Europe’s Great Depression was more than the result of some misguided economic policy in any particular country. But also, there is not a perfect environment with all options for decision makers (or policy makers) all times, having serious problems in the institutional structure that did lead to failure of coordination. 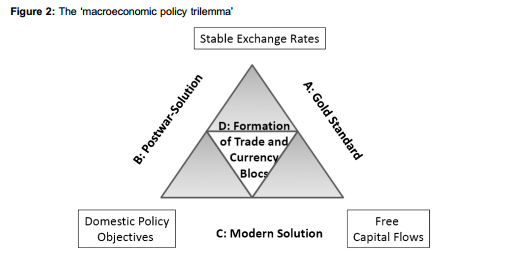 When Europe survived from First World War, it was injured both economically and politically. Millions of people had died from epidemics or starvation and there were many that survived with permanent disables or traumas. It was really tough for Europe, for the world… From a long-term perspective the years 1914–18 mark the end of Europe’s economic expansion and its decline, relative to the rest of the world economy, which continued throughout the twentieth century (Roses and Wolf, 2010). On the other hand this political and economic decline was not unavoidable. Europe still had a massive potential for economic growth brought by technological and sectorial change by the accumulation of capital. Whether expressed as the ‘macroeconomic trilemma’ or the ‘eternal triangle’, policy-makers in small economies have to choose one of the following four policy regimes as illustrated in Figure 2 (Wolf, 2010).

With the stabilization of the franc and the lira in 1926-1927, Europe had mostly completed the gold standard’s reconstruction. Also, the political situation also stabilized with Locarno (1925) with these stabilizations some hopes had been born for domestic stabilization in European countries. But these stabilizations soon proved to be poor with all the economic changes in Germany and United States of America. We can say that the gold standard had driven Europe and whole the world in the Great Depression. We’ll see what prevented EU decision makes from getting rid of their “gold fetters” (Eichengreen), in the terms of devaluation and/or by imposing capital controls. Also we will see what factors prevented decision makers in EU from being expansionist after they had been forced to give up on gold standard.

The decision (not) to abandon the gold standard

After the currency crisis in 1931 a first set of effective policy responses to the Great Depression had been triggered by it, and several European countries were forced to give up on gold standard. Especially there wasn’t any single country in Europe that abandoned the gold standard with their will, in contrast to the United States of America in 1933. “A different set of events that was ultimately linked to the issue of reparations led in July 1931 to a crisis in Germany that looked like a twin crises with a near simultaneous run on bank deposits and the currency. When Germany was forced off gold in July 1931, the attention of the markets turned to the other large weak gold currency, sterling”. (Wolf, 2010) 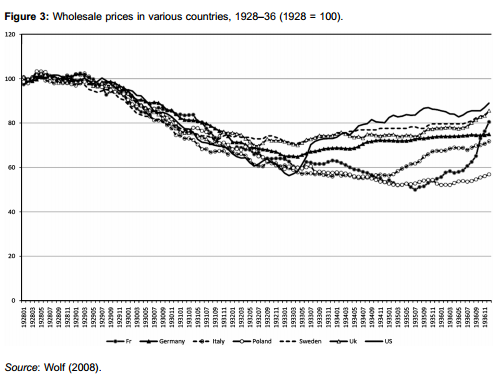 However, there were still some European countries that continued to use gold standards. Such as; France (until September 1936), Switzerland (until September 1936), Poland (until April 1936) and Italy (until 1934) used gold standards after 1931. Of course these decisions have a huge effect on these countries’ economies. For example; in Figure 3, we can see that the wholesale prices went down significantly from 1928 to 1936 (during the process). Also, we can see that there are several differences in the wholesale prices in the countries that have made the decision (giving up on gold standard) different times (in 1931 and in 1934-1936).

The decision (not) to pursue expansionary policies

The purpose of this section is to figure out what factors prevented decision makers in EU from being expansionist after they had been forced to give up on gold standard. With the wave of giving up on gold standard in 1931 (Austria, Czechoslovakia, Britain, Germany, Hungary and all Scandinavian countries); to stabilize their economies, they should’ve have let policy makers to apply monetary and fiscal policies expansion. But it had not happened before 1935.

All the countries in Europe had made different or similar decisions to recover from depression. For example; Britain did put aside gold convertibility and introduced a system that allowed devaluation on sterling. Some countries that followed Britain about gold standard in 1931 started to recover from 1932 and so. Some other countries, such as; Netherlands, Poland, Belgium, Czechoslovakia, Italy and Switzerland managed to follow France in its policy with existence of gold standard without using exchange controls. All of them imposed by deflation and further economic regression (as in Figure 1 and 3). 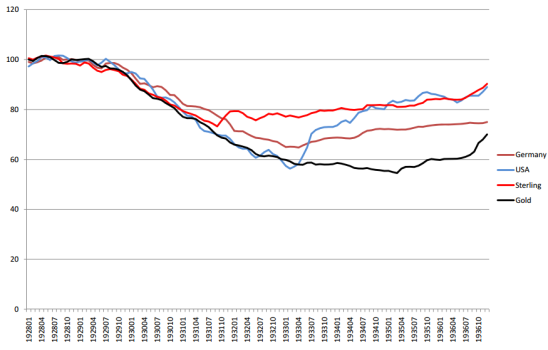 As we can see in all figures (Figure 1, 3 and 4), the great depression had a massive impact on all countries in Europe, even in whole world. Unemployment, prices change and all other negative economic variables existed in those days. Worldwide GPD fell by about 15% during the great depression. And saying about the great depression that can truly and fully describe it; “Thirty Years War rather than Great Depression” (Wolf, 2010).

What I think of about this topic, about this article is; everything matters during these types of crises. Economic, political or whatever… Models, politics, policies and timing matter. Decision or policy makers should know when to react how to react according to situations. Every small move can speed up your recovery or slow it down easily, as we can see below…