As the major economic resources of Singapore, Tourism industry is increasing rapidly in recent years. It attracts different international tourists from different countries. In 1964, Singapore government established the Singapore Tourism Board in order to manage this industry. This board focuses on analyzing the performance of tourism industry. Then the government can set and implement the suitable policy measures that can improve Singapore economy. In the1980s, it provided some specific spots, such as Chinatown, Sentosa and Merlion. Also, government pays attention to the quality of infrastructure, high quality service and a healthy. In 1997, it renamed the Singapore Tourism Promotion Board.

The development of Singapore tourism industry can influence the operation of its relevant industry, such as transportation, hotel and retail industry. These elements influence sales revenue and job income. The indirect influence is the growth of GDP, the change of job opportunities and the growth of occupancy.

As seen the graph in the follow, it describes the growth of total Gross Domestic Product (GDP) from 2003 to 2014 in Singapore. The total trend shows an increase in ten years. Between 2003 and 2008, the tourism value fluctuates between 8% and 10%.

However, after 2008, the trend of value is to continue to grow in the next four years. By 2012, the share of tourism is about 11.2% in total GDP. It reaches at the highest value of tourism during these ten years. 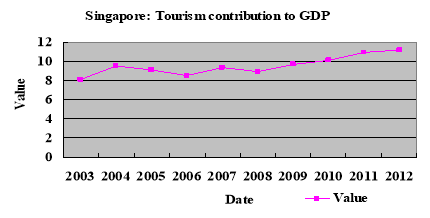 2.2 The Change of the Average Daily Rate (ADR) and Occupancy

3.1 The growth of International Tourist Number 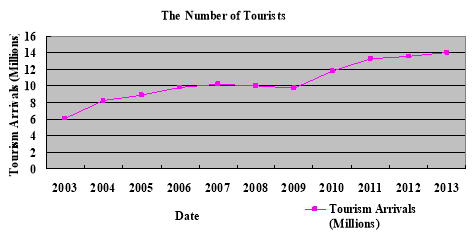 Singapore government provides some policy measures to attract the tourists from different countries. According to implement these suitable policy measures, it increases the Singapore economy indirectly. There are three major measures that can be use to maintain the growth of Singapore economy, such as providing tax refund of tourists, building the large integrated resorts and providing a variety of transportation modes.

Singapore government provides the Tourism Refund Scheme. It points out that the tourists can refund the GST of goods that they purchased from the shop in Singapore, if the shop is allowed to use this policy. It only used by tourists and the goods must be purchased within two months. In Singapore, there are two mainly refund agencies called Global Blue Singapore Pte Ltd and Premier Tax Free & Fintrax Payments Pte Ltd (2014). For the convenience of tourists, it also provides new policy called the Electronic Tourist Refund Scheme in August 2012. The tourists can refund GST through self-service kiosk near airport and terminal.

Then, Singapore government build a large integrated resort called Resorts World Sentosa (RWS). In this resort, the casino as a large entertainment venue can increase revenue. It owns the strict rule and regulations to prevent money-laundering. It provides the 100 SGD entre fee and 2000 SGD annual fee. On the other hand, their own hotel in resorts brings convenience for tourists. In RWS, there are four main hotel called Hard Rock hotel, Crockfords Tower, Hotels-Festive hotel and Hotel Michael. It owns total about 10 restaurants and 1350 rooms to serve enough tourists. It also provides some specific spots like Universal Studios theme park and the marine life park. RWS mainly provides services for audiences as a family (Jeff Weinstein, 2010).

Furthermore, Singapore government establishes a perfect public transportation system. It includes mass rapid transit (MRT), buses and taxis. Because of the perfect road-network, tourists can use these transportations to reach all of spots like Sentosa. Comparing with buses and taxis, the main concentration of MRT line is in civic center. If tourists want to the outskirts of Singapore, a taxi is a good choice because it has no fixed route and it arrives faster. Also, government provides ez-link card that can be used in buses and MRT. It is convenience for tourists to purchase and top up. They can top up the value of the card by the counter in bus interchange and MRT stations. They also top up through electronic ticket machines by themselves (Everlyn Lee).

4. The Environmental Impact of Tourism

Cultural diversity is one of the unique characteristics in Singapore, because some local residents are immigrants from different countries, such as China, Malaysia and India. They may change their life way to adapt to the environment in Singapore, but they also keep their own unique personalities. Some specific spots that keep traditional architecture attract a large number of tourists, such as Chinatown, Little Indian and Arab Street. Tourists know some traditional cultural through these spots.

4.2 Change of the Physical Environment

The development of tourism industry needs to expand tourist attractions and increase infrastructure. Government needs to build enough hotel and restaurant to hold tourists. Also, they need to create new spots around the original spots. This measure needs large areas of lands. For this reason, the physical environment there changes. For instance, local residents need to move to other place. Government also dismantles the original building.

According to analysis of economic impact, the change of GDP, employment and occupancy have a significant effect on tourism economy in Singapore. The reason is that service industry can bring a large economy in total GDP. However, if the government plan to develop tourism industry, they need to pay attention to source they needed. That’s because Singapore as a small country has limited source. If they want to expand tourism industry, they need more sources. It increases cost and it raises the price of goods and services indirectly. Government need to analyze and adjust the resources purchase program aim at this problem regularly.

Then the increase of tourism number increases the rubbishes they used. The rubbishes can pollute the environment. What’s worse, if these rubbish can be never clear in time, it influences the health of local residents who live near the spots. Therefore, government must assign employees to clean the rubbishes and do campaign to protect environment. Also, traffic jam is a large problem that government needs to deal with. During the peak time, government can let polices to direct traffic.