Potential Risks, Costs and Returns of the Global Economy in 2017 (and Beyond), the Likely Impact upon Global Shipping Industry and Methods to Take Advantage of Opportunities Whilst Minimising Threats

The Global Economy has been in the doldrums in the last decade and has not completely recovered from the financial crisis of 2008. The crisis that began with the sub-prime market in the US, has now been conveniently exported from the US, leaving the world’s largest economy in a ‘mirage of growth’ while quantitative easing is preparing the grounds for the worlds next financial crisis. This situation is further exasperated by the forecast of dipping growth rates of global economies for the coming years. In this turbulent environment, it is only natural that the backbone on which 90% of the world trade moves, the shipping industry, would not remain insulated. Unique problems of oversupply, excessive container capacity and inability to achieve ‘zero supply side growth’ (BIMCO, 2016) among others, has only added to the already complicated quagmire. This report attempts to analyse the potential risks, costs and returns of the Global Economy in 2017 (and beyond), and the likely impact upon Global Shipping Industry and identify way ahead to take advantage of opportunities whilst minimising threats. It is practically impossible to examine all aspects of the Global Economy in the scope of this article. However, the issues that may have the largest impact have been highlighted. 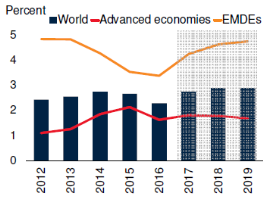 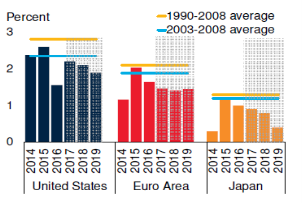 Reduction in trade globally, investment shrinking and increased uncertainties in the policies of countries, has slowed down the Global Economy. Predicted 2016 global growth has fallen 0.1 point from the Jun 16 estimates to 2.3 % (WorldBank, 2017). In 2017, it is expected that growth will rise to 2.7 % global growth is expected to rise to 2.7 percent in 2017, riding on the expected recovery in emerging market and developing economies (EMDEs).

Overall, the better economies are still struggling with reduced growth, uncertainty on policy issues and poor investments. US, despite the euphoric economic feel good post Trump’s victory, is likely to a modest growth of 2.2 percent in FY 2017-18. It is expected that encouraging monetary policies will see the Euro Area and Japan improve on growth forecasts in the coming year.

Given the financial and political climate, there is considerable uncertainty regarding economic forecasts with most forecasts inclined to make 2017 a sluggish year. Policy uncertainty in USA and Europe (e.g. BREXIT), electoral results in both, major and emerging economies (e.g. France and India) and market disruptions are serious risks that unfortunately cannot be predicted. On the other hand fiscal stimulus packages in pivotal economies, bring with them, risks of their own. Given the predominance of the US economy on global trade, it is inevitable that happenings in the US will set up a ripple effect. The Global Risks Report 2017 by the World Economic Forum’s has forecasted “deep-rooted social and economic trends are manifesting themselves increasingly disruptively across the world” (WEF, 2017).

Before the American Presidential elections, both the MSCI emerging stock market Index and the JP Morgan emerging market bond index had outperformed their developed world counterparts in 2016. However, the election results saw emerging market currencies suffer. FII have been withdrawing from the emerging markets due to what’s now being called ‘Trump tantrums’ like the 2013 ‘taper tantrum’ when Federal Reserve indicated reduction in quantitative easing (Anon., 2016). Trumps policies, in the short term, has resulted in a stronger dollar (IMF, 2017). That along with increase in interest rates announced on 15 Mar 17Â  (Board of Governors of the Federal Reserve System, 2017) along with possible trade protectionism, would make it difficult for emerging markets to repay loans and may, therefore, see default in payments by countries. Further, actions like the abandoning of the Trans -Pacific Partnership (TPP) are likely to deal a body blow to the already weak Global economy (Anon., 2016).

With some of the major European countries set for elections in 2017 and an increase in support for far right candidates, possible negative impact on the Eurozone cannot be ruled out. The beginning of the BREXIT process did impact markets and currencies across the globe. Nobel prize winner Robert Shiller recently advised economists in his keynote address at the annual conference of the American Economic Association (AEA) in Jan this year, that economists should think more broadly about the factors that affect human behaviour (and not to keep economics isolated from politics) (Anon., 2017). If that were considered, it is obvious that the possible options increase manifold.

Quantitative easing (QE) since 2008 has bloated the holdings of four of the world’s largest central banks, in the form of government bonds, to $18 trillion from a comparative $6 trillion (Fensom, 2016). The reducing returns in the long term would mean that the European Central Banks may need to restructure their monetary policy. If that were to happen, and in particular, if QE were to stop, the markets will be hit. This then leads to a speculative environment, which may not be healthy to boost economic growth.

The container shipping industry lost $15 billion as a result of the Global Financial Crisis in 2008. Though on 20 May 08, the Baltic Dry index peaked to reach 11,793 points, by year ending, it dropped to 663 points, a fall of 94%. In 2010, the Eurozone crisis prevented a rebound in trade between Asia -Europe. This was further dampened by the downturn in the Chinese GDP growth to single figures, where it now remains around 6.5 %. Before the financial crisis, a large number of mega ships had been ordered, based on the expectation that the global container demand would grow. This was the beginning of the over-capacity saga. By 2015, the ship orders placed had been growing 100% year-over-year despite the impact that overcapacity was already having on the freight rates (Reuters and the Associated Press, 2016). The second half of 2015 saw North Europe – Asia rates fall to $205 per TEU and the Asia – Med rates fall to $195 per TEU.Â  Last year in February, the Baltic Dry Index crashed to a historic low of 290 (Anon., 2017). On 13 Mar this year, the BDI reached 1099 based on the rise in the capsize index (Toovey, 2017).

Hanjjin, which was then the 7th largest shipping company in the world, filed for bankruptcy in August last year, with debts estimated at Won3.53tn ($3.1bn), after creditors refused to bail it out. In Feb this year, the Korean court struck the last blow when it decided that all Hanjjin assets would be best used if it was sold to repay debtors. By mid-Mar this year, all Hanjjin ships had either been sold for or returned to its owners. This has been the most prominent casualty of the ripple effect that was set off after the 2008 financial crisis, which has led to the current excess capacity booby trap. Although Maersk claims that the industry is past its worst crisis, in mid Mar, it reported a net loss of $1.9bn for 2016 (Jung-a, Song; FT, 2017). Hyundai Merchant Marine, posted net operating loss of Won647.3bn in the three quarters of 2016, and has announced that it expects to continue to be in loss through first half of 2018 (Anon., 2017). The gravity of the crisis is evident when one sees the South Korean government creating a Won 1tn shipping fund to help shipping companies that are floundering 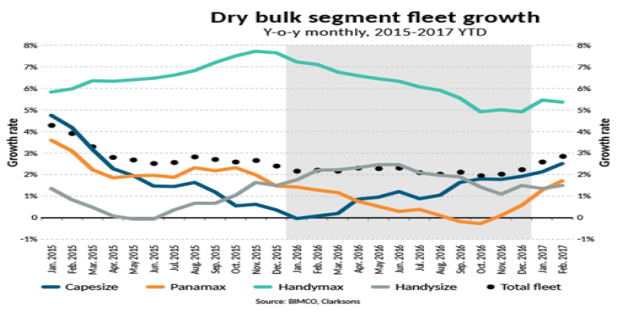 It is obvious that the market outlook for the shipping industry is bleak. What make the case really porous is that even the most conservative estimates predict an upturn only after mid-2018. To understand the current situation better, let’s look at some market figures:-

Return to a healthy global shipping market would require the industry to deliver many years of the consistent demolition targets and reduced orders (Sand, 2017). With hardly any demolition in the crude carriers and consistent supply of new vessels, it is unlikely that the skewed capacity ratio of supply and demand will be corrected in the near future. It is essential that industry undertakes self-regulation to increase demolitions to affect a turnaround soon.

Government support for the ailing industry would be required prevent a repeat of ‘Hanjjin-like’ experience. However, a fine balance would need to be struck as it may affect free trade and make the playing field for businesses uneven (Sand, 2017).

Given the current state of the global economy, with the markets over valued and the US economy riding the ‘Trump Effect’, it is likely that the correction that is due, is waiting just around the next corner. With major economies not expected to see robust growth in FY 2017 – 18, coupled with the skewed capacity supply – demand ration in all sectors of the shipping industry, it is a market that will not draw many investors, especially after the Hanjjin episode.

In such a climate of uncertainty, the following is recommended:-