A country’s economic is closely linked to the existence of what types of human capital within a society or a country, this is because human capital has a large influence on the earnings and income distribution of an individual in a society or a citizen in a country. Thus, the key to success of a development program in a community or in any country is highly dependent on the “quality of human capital” which is owned by the people in the country itself. Development of human capital is an important component to achieve economic growth and development of a country. One of the characteristic of the developed nation is the existence of the country’s human capital which is based on high level of it education. To transform into an ICT-driven and knowledge- based society, Malaysia knowing that highly skilled, well-educated and healthy workforce is needed to achieve high income nation at the year 2020. For the purpose to reaching above objective, the public and private should be encouraged in the use of knowledge-oriented service and also have the value-added to allow competing and surviving in the new economic era in this age of globalization, with the planning related to the development of human capital as a key strategy in achieving to make a country as a developed nation. Government has worked hard to achieve this goal. Completion of the assignment is done by compare available data in health-care and education related metric statistical indicators.

Human capital refers capital formed through the capital investments in human health care, education and training. The word capital is often defined as a group of funds, assets and property which can be used in many activities to make profit or product. According to Cambridge Dictionaries, there are two meaning of capital. First is a city that is the centre of government of a country or smaller smaller political area. Second is the most important place for a particular business or activity. But when the “capital” term related to economy, it is often defined as a group of funds that can be mobilized in a variety of activities to product profitable product.

In the context of this paper, what we want to say about “human capital” is the human ability to maximize their ability to done well, achieve great in all aspect of life based on human values. Besides to make a labor incarnate in the ability to perform and produce economic value, creativity, and cognitive abilities should also present in the labor. According to Adam Smith, human capital is defined as “gather useful abilities of all the inhabitants or members of the society. We can get such endowment during the process of education. The education, study or apprenticeship , always require a high cost, which is a capital fixed and realize, as it were, in his person. After received education, those labor force will become more skillful. The improved skill of a labor may be equal effective as capital intensive (machine).Although it costs a certain expenses but the profit is more than those expenses.

The Importance of Human Capital

In labor-surplus countries, human capitals are more important. These countries are naturally endowed with more labor force because of the high population growth rates. For examples, China and India. The surplus labor in these countries are more than the visible capital resource. To fully utilize the surplus labor, this human resources can be transformed into Human capital by using factor such as education, health and moral values. Insufficient tangible capital in the labor surplus countries can be settle by speed up the process of human capital practice with both private and public sector invest in education and health sector. There are two key principles that are very important in any discussion related to human capital. First, the employee is considered as an asset to an organization whose value can be enhanced through investment. As in any investment , the main purpose is to maximize the return of investment while control or minimize the risk. As the value of the employee increases, the ability to work also improved. Through training provided by the organization to an employee while at work, the employee are motivated to work harder. Since human capital has close relationship with human development, and with the present of human development, the qualitative and quantitative progress of the nation is certain. Human Development Index (HDI) is used by each nation as the statistical indicator of estimating Human Development. HDI combine heath, life expectancy and education as a holistic measure of living levels. HDI can be calculated by 1/3(income index)+1/3(life expectancy index)+1/3(education index). HDI show a positive relationship between human capital formation and economic development. HDI can be calculated for groups and regions in a country. HDI varies among groups within countries, across regions in a country and between rural and urban areas.

The Central Roles of Education and Health

There are several basic objectives in economic developments. Among those basic objectives, education and health are included. They are important ends in themselves. Health is important to well-being, and education is effective for a comforting and pleasing life. Furthermore, education plays a important role in the ability of a developing country to assimilate modern technology and to create the potential for self-sustaining growth and development. Next, health is a must for increases in productivity, while successful education depends on adequate health as well. In this case, both education and health are important components of growth and development.

These two human capital issues are treated together because they are closely related in economic development. Bigger health capital may enhance the return to investments in education as health is an important factor in school attendance and in the formal learning process of a child. Students with good health will not frequently absence to school. Healthier children are more active in school and focus in learning. The cost of education per worker will increase if deaths of school-age children are at a high level. Return to investments in education increased by longer life spans. Productive using education can be use by healthier individuals at any point in life. In the other hand, greater education may increase return to investment by create many health programs which depend on skills learned in the school. Education make the people learn about basic personal hygiene and sanitation. The formation and training of health personnel teach by education. Increase in productive efficiency from investment in education increase the return on a lifesaving investment in health.

Performance of Human Development in Malaysia compare to neighbour countries

Using data collected from WHO official website, Table 2 was created with selective indicators for the four countries with the most latest information can get since not all metrics were available for the same year.

In 2004, expenditure spend on health sector for all four countries are ranged from 2.8% to 3.8% of total their GDP values. From the table, Malaysia has the highest expenditure on health from GDP values which as much as 3.8%, followed by Thailand 3.5%. Thailand show to have a greater proportion of the general government expenditure stated 11.2%. One possible cause might be there are relatively more public sector programme in Thailand rather than the private sector.

Malaysia has dominat position in term of per capita expenditure on health and Human Development Index, the expectation is that Malaysia would be clearly lead these 4 countries in the health indicators. 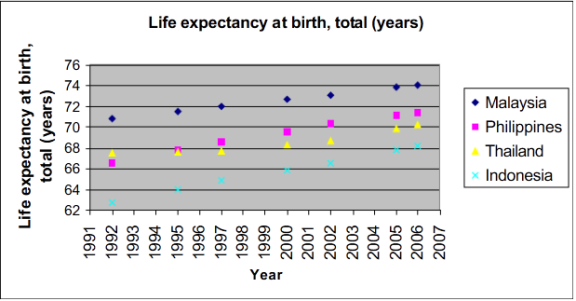 From the figure 3, Malaysia ranked the highest among these four countries while Indonesia at the bottom. Philippines has a better performance than Thailand although Thailand invested much more in health sector( refer indicators in table 2).

Similar table construct for health sector will be used for education sector by using available data from the United Nations Organization for Education, Science and Culture Institute For Statistics website. Table 3 below show the selected education indicator collected from UNESCO.

In 2004, Malaysia and Thailand have a larger investment for education than Indonesia and Philippines. Sensibly, the higher investments in education result in higher literacy.

By referring the table 4, although Malaysia has a higher expenditure in education, but the adult literacy rate in Malaysia is lower than Philippines and Thailand until the year of 2004. Also, Malaysia and Indonesia have a bigger gender gap than both Philippines and Thailand in adult literacy rate. Even for tertiary education in Malaysia was revealed that female are much more than male at public universities for a ratio 65:35 by the Minister of Education Malaysia.

Malaysia ranked 22 out of a list of 122 nations, and fifth in the Asia-Pacific region, after Singapore, Japan, New Zealand and Australia, but ahead of South Korea, Taiwan, Thailand and the Philippines. The index is part of WEF’s Human Capital Report 2013, a pioneer study that compares the abilities of 122 countries to “develop and deploy healthy, educated and able workers”.

The country rank is counted by assessed in four different areas which are education sector, health sector, employment and enabling environment.

The report stated that Malaysia performs well on most of the qualitative talent and training indicators in the Workforce and Education pillar. However, Malaysia relative weak in its health, education and wellness pillars. Government need to pay more hard work to have improvement in this few pillars.

In conclusion, although Malaysia is not in the category of very high human development, however from all the aspect in the research showed that Malaysia’ data is still batter compare to the average of East Asia and the Pacific and the average of all countries in the world. Theoretically, to created healthy and educated workforce, government should invest on health and services sectors.

The notion of knowledge-based economy is ability for the human capital to create, innovate, and generate new ideas, as well as apply technology and exercise superior entrepreneurial skills. Organizations are to become more knowledge-intensive when more industries are adopting the concept of knowledge –based workforce. Accordingly, the economy will be characterized by knowledge-based activities and high-technology industries accounting for a significant share of employment, GDP and exports. Hence, knowledge will become a commodity to be traded, besides being a factor of production.

However, the result from investment in health and education cannot just simply assume as there are direct improve in the quality of life. We need to consider other factors such as geographic and demographic condition and the ability to handle these investment on human capital.