[1]The power sector in India has undergone significant progress after Independence. When India became independent in 1947, the country had a power generating capacity of 1,362 MW.Hydro power and coal based thermal power have been the main sources of generating electricity. Generation and distribution of electrical power was carried out primarily by private utility companies. Notable amongst them and still in existence is Calcutta Electric. Power was available only in a few urban centres; rural areas and villages did not have electricity. After 1947, all new power generation, transmission and distribution in the rural sector and the urban centres (which was not served by private utilities) came under the purview of State and Central government agencies. State Electricity Boards (SEBs) were formed in all the states.Nuclear power development is at slower pace, which was introduced, in late sixties. The concept of operating power systems on a regional basis crossing the political boundaries of states was introduced in the early sixties. In spite of the overall development that has taken place, the power supply industry has been under constant pressure to bridge the gap between supply and demand.

Development of Power Sector is the key to the economic development. The power Sector has been receiving adequate priority ever since the process of planned development began in 1950. The Power Sector has been getting 18-20% of the total Public Sector outlay in initial plan periods. Remarkable growth and progress have led to extensive use of electricity in all the sectors of economy in the successive five years plans. Over the years (since 1950) the installed capacity of Power Plants (Utilities) has increased to 89090 MW (31.3.98) from meagre 1713 MW in 1950, registering a 52d fold increase in 48 years. Similarly, the electricity generation increased from about 5.1 billion units to 420 Billion units – 82 fold increase. The per capita consumption of electricity in the country also increased from 15 kWh in 1950 to about 338 kWh in 1997-98, which is about 23 times. In the field of Rural Electrification and pump set energisation, country has made a tremendous progress. About 85% of the villages have been electrified except far-flung areas in North Eastern states, where it is difficult to extend the grid supply. 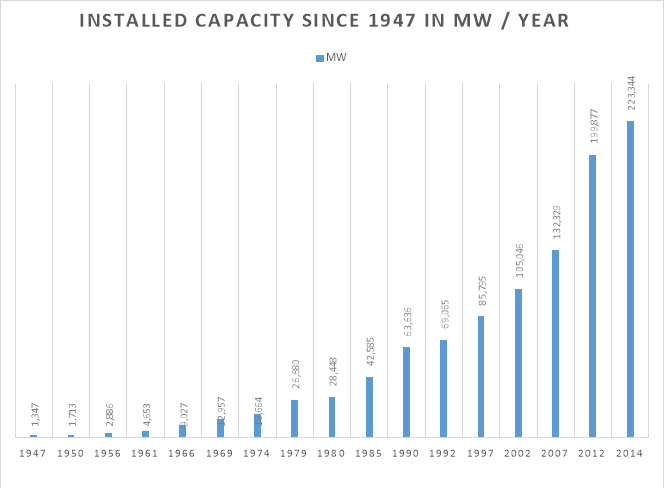 Structure of power sector after independence

Till December 1950 about 37% of the installed capacity in the Utilities was in the public sector and about 63% was in the private sector. The Industrial Policy Resolution of 1956 envisaged the generation, transmission and distribution of power almost exclusively in the public sector. As a result of this Resolution and facilitated by the Electricity (Supply) Act, 1948, the electricity industry developed rapidly in the State Sector. In the Constitution of India “Electricity” is a subject that falls within the concurrent jurisdiction of the Centre and the States. The Electricity (Supply) Act, 1948, provides an elaborate institutional frame work and financing norms of the performance of the electricity industry in the country. The Act envisaged creation of State Electricity Boards (SEBs) for planning and implementing the power development programmes in their respective States. The Act also provided for creation of central generation companies for setting up and operating generating facilities in the Central Sector. The Central Electricity Authority constituted under the Act is responsible for power planning at the national level. In addition the Electricity (Supply) Act also allowed from the beginning the private licensees to distribute and/or generate electricity in the specified areas designated by the concerned State Government/SEB.

During the post-independence period, the various States played a predominant role in the power development. Most of the States have established State Electricity Boards. In some of these States separate corporations have also been established to install and operate generation facilities. In the rest of the smaller States and UTs the power systems are managed and operated by the respective electricity departments. In a few States private licences are also operating in certain urban areas.

The policy of liberalisation the Government of India announced in 1991 and consequent amendments in Electricity (Supply) Act have opened new vistas to involve private efforts and investments in electricity industry. Considerable emphasis has been placed on attracting private investment and the major policy changes have been announced by the Government in this regard which are enumerated below:

The share of hydel generation in the total generating capacity of the country has declined from 34 per cent at the end of the Sixth Plan to 29 per cent at the end of the Seventh Plan and further to 25.5 per cent at the end of Eighth Plan. The share is likely to decline even further unless suitable corrective measures are initiated immediately. Hydel power projects, with storage facilities, provide peak time support to the power system. Inadequate hydel support in some of the regions is adversely affecting the performance of the thermal power plants. In Western and Eastern regions, peaking power is being provided by thermal plants, some of which have to back down during off peak hours.

In above figure growth of power sector shown which indicate periodical performance and fossil fuel being used in power generation. In year of 1947, when India got independence the generation capacity was only 1362 MW, in which coal based generation was high after that hydro took place because of absence of high technology and lack of infrastructure.

Indian power sector facing lot of problem in all sub-sectors like Generation, transmission and distribution. After unbundling of power sector all those three sector get boosted due to appropriate funds provision by government. From stating of generation to ending of distribution, lack of skilled labour, management, asset management and infrastructure are responsible to low growth in power sector.

Apart from technological and managerial in-efficiency few major issue given below some reason to sickness of power sector.