The history of the Malaysian economy can explain through the structural change process. From year 1957 where Malaysia had announced independence till the year 1970, Malaysia was an agriculture oriented country which produces tin, rubber, oil and gas and palm oil. This sector had dedicated 60% of Gross Domestic Products (GDP) between these years. The economic growth in these periods was between 5% and 10%. During that time, the rate of the employment and unemployment is slightly the same.

In 1980s, Malaysia had turned into a manufacturing oriented country which produce electronic and electrical goods, iron, car and cement. The GDP rate of this sector had increased since 1980s. The economic growth within 1980s until the 1990s had increased to 9% compared with the previous period. The employment rate was increased since 1980s. The advancement in these periods of time is because of the innovation of the technology.

Since the year 1995 until now, Malaysia had become a service-oriented country. Under this sector, it contains of tourism, finance and education. The percentage of GDP had the biggest share since year 1985. The economic growth of this sector is around 7%. The employment rate has been more than 50% since year 1985. The reason of development of Malaysia is liberalization in the financial sector.

As we known, monetary policy is implemented by the Central Bank that policy is useful to monitor financial system and maintain the stability of the economy growth. According to the article we found that Central Bank increased interest rates in July to solve overheating economy and rising consumer debt.

As result, the Central bank had implemented a contractionary monetary policy that means decrease in the money supply through adjust interest rates. The main purpose is to slow down and stabilize prices in the market. 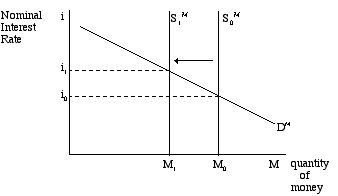 As the graph shows, M0 curve shifts to the left, equilibrium interest rate (r) rises. That has several methods to help us solve inflation rates

The first method is adjusted by using interest rates. The higher interest rates will induce people to increase savings and reduce consumption. Furthermore, rises in interest rates also will let the money become more expensive to borrow loan its forced investor to reduce in investment. This situation further contributed the overall demand and overall supply dropping simultaneously. Therefore, the interest rate is one of the important tools to control inflation.

The third method is government issued bonds to public. It is efficiently way collect back money with public. Because of demand driven inflation remains contained when spend is less, it would decrease the pressure on prices.

According to the article, surging exports in Malaysia’s growth unexpectedly accelerated to the fastest pace in six quarters. Therefore, the central bank had to raise its interest rates further, the Malaysia Ringgit rose to a nine-month high.

Firstly, the gross domestic product (GDP) could affect the economic growth of the country. The GDP rose 6.4 percent in the three months through June from the year earlier. The GDP expansion would exceed the central bank’s forecast range of 4.5 percent to 5.5 percent (Governor Zeti Akhtar Aziz, 2014). Malaysian Prime Minister Najib Razak planned to increase the share of tourism, health care and other services from 55.2 percent of GDP in 2013 to 65 percent by 2020.

Secondly, the currency of Malaysia could also affect the growth of the economy. When the currency drop, Malaysia have to pay more to get the same amount of goods and services, therefore the economic growth will drop. But according to the article, the currency of Malaysia Ringgit rose from 0.6 percent to 3.1615 percent against the U.S. dollar and this had strengthened about 3.6 percent this year. Furthermore, this was the second-best performer among the 11 major Asian currencies tracked by Bloomberg.

Lastly, the services done by Malaysia also lead to positive outcome to the economic growth. According to the article, the services of Malaysia increase by 6 percent in the three months through June from a year earlier. Therefore, this will increase the interest-rate swaps, which are pricing in a 50 basis-point in the next year.

In conclusion, when Malaysia is on the track of the economic growth, it can boost its average living standards of the citizen through higher real GDP per head. The unemployment rate will also decrease due to the economic growth which can generate new jobs. The government also could have extra income from the tax revenue paid by the household.

According to this article, the prime minister has spread out the budget 2015 in October, 10. The policymakers took the budget as a fiscal policy instrument to balancing and stabilize the economy. The budget will show us whether the fiscal is profit or loss and the budget is used by the government to make decisions whether apply the expansionary fiscal policy or contractionary fiscal policy. In view of instability and unbalancing in the global economy, the implement of budget 2015 is very defiant. There is a negative risk would likely remain at 2015, the risk becomes worsen by increasing inflation pruning domestic demand further after the execution of the second time subsidy rationalization and the upcoming GST effective on 1 April 2015.

In budget 2015, the government is considering raising the BR1M funds. Nowadays, the cost of the house is getting higher, government introduce the reasonable house scheme to every peoples. For example, 1 Malaysia People’s Housing Program (PR1MA) and Private Affordable Ownership Housing Scheme (MyHome). This shows that the government is giving subsidy to the low and middle income groups to balance the economy in Malaysia. Through these subsidies, government able to balance and maintain the price level in the market and decrease inflation.

Oil and gas sector is the third profits for the government’s budget. The government is too depends on the volatile industry and the revenues from PETRONAS and has to create a way for more vast based tax revenue source, this is the way that GST comes in. Tax is a tool for government to control the inflation or deflation in the market. When the inflation occurs, the government will increase the tax rate. The higher tax rate will reduce the consumption, aggregate output and disposable income.

There are a lot of issues for budget 2015 to manage at the same time. Once it is ended, the government is pulling back the subsidies and spending or increase tax rate to balance the economy. The budget 2015 indeed should become a balancing act between economic stability and fiscal prudence.

According to the article, Malaysia had faced an increase in inflation rate and this had caused the government feels heat over the living costs. The government have a hard time over rising living cost and increasing the interest rates earlier this year. Therefore, it could further dampen consumer sentiment.

Inflation will lead to a price increase for the goods and services in the country. Therefore, the buying power will decrease, the household will have to use more money to buy the same amount of goods and services. There are a few causes that can increase the rate of inflation.

Firstly, the government of Malaysia introduced a series of subsidy cuts that affect the faster price rises such as fuel. When the subsidy of the country decrease, the price of the goods and service will increase and purchasing power of consumer will decrease as they need to pay more for the same quantity of goods and services.

Secondly, the cost of living in Malaysia increase due to the cost of petrol pump price in Malaysia increased by 10% and a 15 % hike in power tariffs except for the other necessary goods such as vegetables and meats. In the other hand, the food and transport prices rose fastest in December from a year earlier. Besides, surging housing prices also caused the cost of living increase. All of this prices increase factors had contributed to the rise of inflation.

Lastly, the Malaysia Ringgit currency decreases by 1.5% since the beginning of the year. Furthermore, this will affect the cost of the import of the country to increase and the interest rates will rise. Prices of the goods and service will become relatively higher and consumer have to pay more for the same quantity of goods and services imported to the country.

Firstly, the expansionary fiscal / monetary policy. The government could delay plans for road toll hikes and increase the cash handouts for poorer Malaysian in order to help to overcome the increasing in the living cost problem (Rahul Bajoria, 2014). When the government implements expansionary fiscal or monetary policy, the aggregate demand will increase. Thus, it will cause the aggregate output increase, but price level will increase further (Case, K.E., Fair, R.C. & Oster, S.M., 2012).

Article: Unemployment rate in Malaysia declines to 2.7% in August 2014.

Granting to the article, Malaysia’s unemployment rate in August 2014 has declined to 2.7 per cent from 2.8 per cent in July 2014.Besides that, the article reveals that the labor participant rate declined to 67.1 percent in August compared to the previous month in 2014. Malaysia had achieved the total employment in 2014.Below are the statistics showing by principal statistics of labour power:- 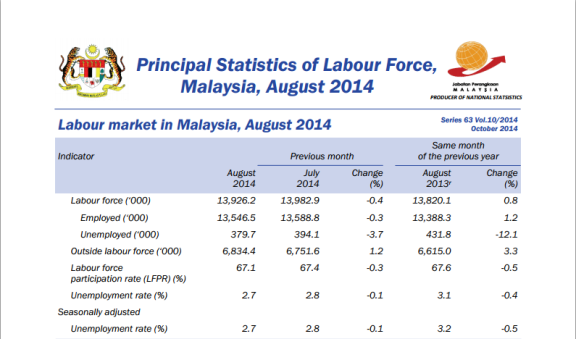 There are a few basic concepts in the labour market. First, Total Labour force is the total aggregate number of employed plus unemployed. Employed means any person 16 years old or older who work for pay, and unemployed means the person of 16 years old or older who is not working. Second, the labor force participation rate is the percentages of labor force to the entire population of 16 years old or elder. Last, Unemployment rate is the percentages of the number of people unemployed to the total labour force. In lodge to attain full employment, the unemployment rate must not greater than 4 per cent.

In closing, we have learned about the importance of the main macroeconomic issue and how it connected to our everyday life.