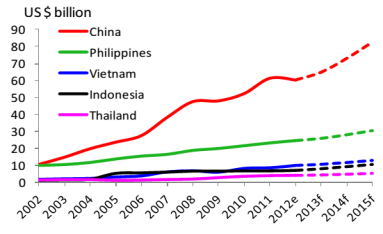 Short distance is one of features of internal migration that makes people to move for many reasons such as to escape from poverty, to get better opportunities or to diversify income sources. In this type of migration we see the flow of people from rural to urban areas. For developing countries, many estimations report that around 40 percent growth of urban population come from migration or reclassification of rural to urban (Chen et al. 1998; UN-Habitat 2008). Although internal migration involved a significantly higher number of people, however it receives much less attention to the researcher of migration compared to international migration particularly in terms of empirical evidences (Zanker & Azzari, 2010; Harttgen & Klasen, 2011)

Table 1 World Urbanization and Prospects of Five Most Populous Countries

However, internal migration from rural to urban areas can also create problem to urban areas. A growing number of urban population can be problems if urban facilities and public infrastructure have not kept pace with it. Pressure on urban areas result in slum formation and other social problems. Rural to urban migration results in an unbalanced distribution of population (Lall et al, 2006), more likelihood of incidences of urban poverty and growing number of slum dwellers that constrained a modern urban functions (Meng & Manning, 2010).

Voluntary migration (merantau) is part of culture in some of Indonesian ethnic groups. The economic crisis of the late 1990s resulted an increase in rural village return migration and increase in documented Indonesian working abroad in 1999-2004. In addition, start in 2001 government implements fiscal decentralization policy in such that the local government (district and municipality) have more discretion over their own revenues and expenditure. It can be expected that differential in employment opportunity and economic development between regions will attract more people to migrate (Effendi et al, 2010; Firman T, 2004).

Integrating economic impact of migration into economic development planning would be an important aspect. Better understanding of the consequences of migration both international and internal as well as urban to rural will contribute to national development and poverty reduction strategy. We explore this issue in the context of livelihood of migrants in urban destination as well as household sending migrants at origin.