Linda’s was established in 1959 by Mr. Lionel Chin Fatt who saw the need for quality baked goods at an affordable price. They currently have 12 locations in Trinidad with plans to add 10 more by 2017. Their product line today includes bakery items such as bread, savoury pastries, sweet treats, cakes and their “Linda’s Fresh” line consisting of salads, sandwiches, wraps, subs, bagels and coconut bakes.

The main risk to Gross Domestic Product (GDP) growth in the energy sector – which contributes 40% of national GDP – will be a sustained decline in energy prices. At the current price of $45 for West Texas Intermediate crude oil (WTI), we anticipate a further downward revision of 2015 projected growth in the sector.

We are of the opinion that both Liquefied Natural Gas (LNG) and WTI will remain at or around current prices, at least for 2015. This is in line with the International Monetary Fund (IMF) forecast for LNG but not for WTI (see Figure 1.2); however we agree that crude oil prices will not go into further decline given current circumstances.

The Repo Rate was increased to 3.25% for three main reasons, to keep in line with expected increases in U.S. interest rates, the headline inflation rate – driven mainly by double digit food inflation, and continued steady performance in non-energy output (Kissoon 2014). We expect as the U.S. rates increase, so will the Repo Rate.

The Federal Reserve is basing changes in its rate on economic performance however current indicators show mixed results. We expect that the rate of increase for both rates will be slower than originally anticipated.

With an unemployment rate of 3.5%, there is extremely limited excess capacity in the labour market. Linda’s has a staff turnover of 8% monthly in stores. This may be attributed to government make work programmes. Reforms that will help diversify the economic base and reduce the fiscal deficit will be difficult to implement, especially in an election year. As such we do not anticipate significant changes to the makeup of the labour force in the short to medium term.

The major ingredient in Linda’s products is flour. Although the flour is produced locally, wheat is imported mainly from the USA; the world’s largest wheat exporter. Wheat exports from the USA are at its lowest over the past three years and are expected to decrease because of reduced demand and a surging dollar.

In the short term prices are predicted to move lower then recover in 2016, depending on demand for wheat as feed and a recovery in corn prices (Wilson and Mulvany 2015). When coupled with increased production worldwide, we anticipate continuing fluctuations in the price of wheat in the short term but not to the extent of 2010-2011 which triggered the last local price increase.

In Quarter 3 of 2014 Central Bank conducted its first Consumer Confidence survey measuring at -4. This can be an indicator that consumers will spend less and save more as they are mildly pessimistic about the economy. If consumers spend less, suppliers may decrease their production output which can affect national productivity and wages. (News.gov.tt, 2015)

Linda’s purchases its flour exclusively from the National Flour Mills (NFM); a state controlled Public Limited Company, and is their second largest customer.

NFM recently adopted a more proactive relationship with its major stakeholders, including Linda’s and the Seamen & Waterfront Workers Trade Union (SWWTU), such as including them in its strategic planning. This bore positive results like a collective bargaining agreement for wages in place for 2013 to 2016 (Trinidad Express 2015).

We would expect this proactive mindset to continue with the importation of wheat, if US wheat becomes too expensive. NFM can easily import wheat from Canada and Uruguay, two politically stable countries that NFM previously or currently imports other grains from.

We don’t expect the fluctuations in the world wheat price to affect the price of NFM flour locally, as it is set by the government – NFM’s majority shareholder. Historically government is averse to increasing the price of flour, regardless of who is in power. This can be seen in flour – and bread – maintaining Value Added Tax (VAT) exempt status, the discounts offered on flour by the current administration, and other price fluctuations being absorbed except in 2011.

Linda’s recently increased the prices on some products and, according to their CEO, this has had no effect on their sales. Linda’s believes that once they have a quality product, their customers will pay the price for it. As such we are of the opinion that buyer power is not a major factor at this point in time.

Linda’s is second in the bread market to Kiss Company Limited and they state that they are number one in the pastry business in the country. Whilst Kiss sells the same product – bread – we are of the opinion that they have different target markets. Kiss is available from groceries to sidewalk shops throughout the country, whereas Linda’s products are only available in their stores. Linda’s products have little or no preservatives and they believe that this is to their advantage since some customers will choose their products over for this reason.

“The number of consumers who think gluten-free is generally healthier fell from 46% in 2010 to 35% in 2012, and the number who thinks it is effective in managing weight fell from 30% to 27%.” (IFT 2014) Based on the premium in product costs, we do not foresee gluten-free entering the mainstream in T&T.

There are some significant barriers to entry for this type of business:

Sector of the Economy

Linda’s is catergorised under the food and beverage manufacturing sector of the local economy. According to the Food and Beverage Industry Development Company, “with the continued expansion of the local economy, the domestic food and beverage sector is expected to continue along its progressive track. In addition, expansion of the regional economy, renewed efforts for research and further product development, and strategic niche marketing will also support sustained growth over the longer term.” (FoodAndBeverageTT.com 2015)

Trinidad and Tobago has a free market economy with Linda’s Bakery operating in as an oligopoly. The bread market is dominated by the leader Kiss Baking Company followed by Linda’s Bakery. There are other competitors but they are small in comparison. In order to compete at the same level as Linda’s you would need to have at least $50-$70 million TTD in startup costs.

Their products however are differentiated. They are price makers utilizing product differentiation by offering a wider range of high quality products some of which may not found in other bakeries. They have also added a new line called “Linda’s Fresh” to accommodate changing customer demands and to stay one step away from the competitor.

Analysis of Demand and Supply

There is limited statistical data on demand and supply within the industry. Therefore we made assumptions using the theoretical concepts and behavioural changes in wheat imports and consumer purchasing.

Using this trend we can assume that the consumption of flour based products (such as bread) has decreased over the years. We can assume that this may be due to lifestyle changes considering “There is an explosion of diabetes in Trinidad and Tobago and the Caribbean and it is now the second leading cause of death in T&T.” (Baboolal 2015) With a prevalence rate of 14.2% and an undiagnosed rate of 37.6%, it is possible that 1 out of 2 adults (20-79) in T&T are diabetic (IDF 2015). We anticipate a surge of diabetic related issues over the medium to long term. According to the World Health Organization the life expectancy for Trinbagonians has increased from an average of 70.85 to 72.5 years. This can lead to suppliers producing less.

Linda’s Bakery product is price inelastic. Their bread prices are lower when compared to Kiss Bakery; however Kiss is the market leader. Bread is considered to be a necessary commodity used in everyday life and is highly consumed in Trinidad. If there is an increase in price, then ceteris parabus, the quantity demanded will not decrease. The percentage of income spent is relatively low; there is a wide availability of substitutes, a high degree of necessity and no switching costs.

On a very basic level Linda’s complemented their goods with drinks for sale, a common practice for most food outlets. For example the sale of a sandwich or Linda’s fresh might increase the demand for drinks. However with a substitute the buyer might buy something other than the intended good in store but if the substitute is outside the business then the company will not maximise profit.

Positive externality in consumption is Linda’s Bakery training their staff resulting in an increase of human capital. They are therefore able to educate other people who benefit from them. Positive externality in production is the tax break in manufacturing that will encourage entrepreneurship to lead to diversification, employment and economic growth.

Free markets allow the negative externality in consumption is the increase rate of diabetes and obesity in Trinidad and Tobago.

There are major opportunities and challenges for Linda’s within the current economic environment. Linda’s Bakery has plans for expansion nationally and potentially regionally. Based on the expense to expand production capacity, Linda’s must continue on its current expansion path to effectively utilize this increase in production capacity.

They can accomplish this expansion by utilizing their current resources and revenue to accomplish the task. As such they currently do not need to go for financing and are not affected by the increase in interest rate. This is another reason why we recommend Linda’s continue on its current expansion path.

They can gain a competitive advantage through the application of technology. For example the introduction of an app can boost the company’s visibility and brand awareness, generate sales and capture customer data to make projections.

However, a major challenge for the company is the limited supply of labour in the country. Even though persons can seek employment at Linda’s with limited experience, there exist easier options through government programmes. The application of technology above may also mitigate some of the burdens of in store staff by shifting the effort needed to the customer. 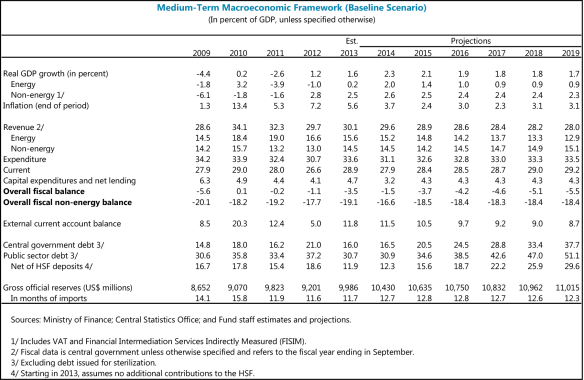 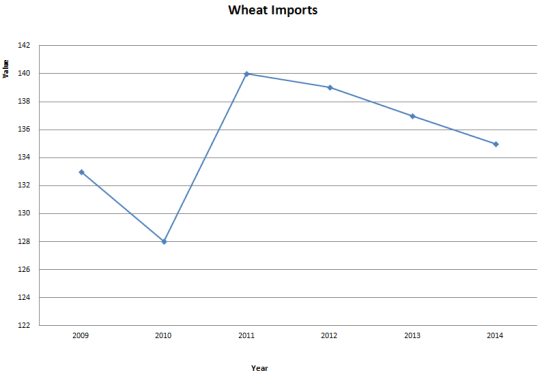 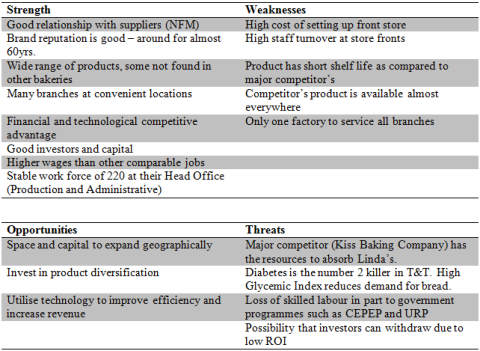